So we reviewed Thallids quite some time ago, but we never touched too heavily on their saproling offspring, which aren't even always tied to the thallids or other fungi. In fact, they get so varied that it probably makes more sense to review them entirely on their own! 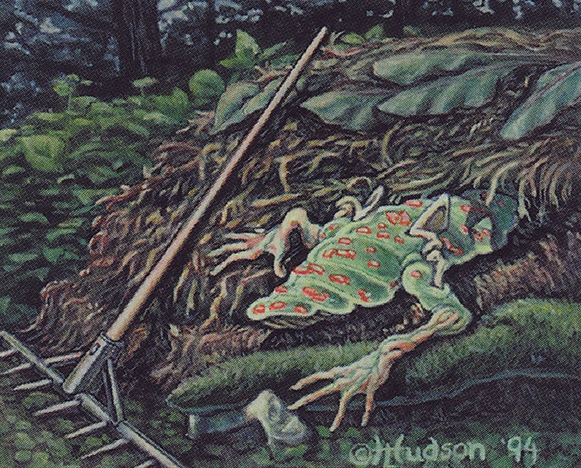 I showed this artwork in the Thallid review, but I didn't take the time to talk about it directly. Night Soil is an enchantment that can generate saprolings, and I believe qualifies as the oldest illustration of one. It's possible this creature is supposed to be a generic thallid, but there wasn't much distinction between thallid and saproling at the time anyway; one was sort of treated as the juvenile form of the other.

I really like this creature, too. A sort of flattened grub of fungal material, covered in spots I used to read as dozens of "eyes" when I was younger, with eerily humanlike limbs and even bony shoulder blades, or something very much like them. 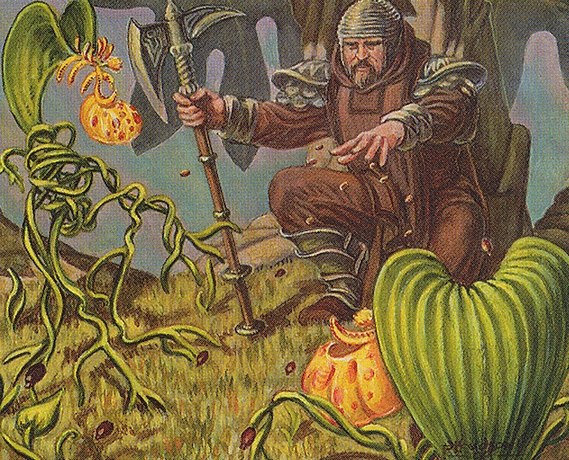 We're not going to be doing these in perfect chronological order, but this was definitely the second card, to my knowledge, to create saprolings and portray them in any way. This time, Heather designed some much more plant-like than fungus-like creatures, almost resembling a slipper orchid or other sac-like flower dangling from a leaf like a cobra's hood with a tangled vine body. Great designs, and it's probably important to note that saprolings canonically aren't limited to fungus at all, but can indeed take the form of chlorophyllic vascular plant life.

It's more like saprolings are very small, very common green-mana elementals, embodying all sorts of growing things. Does that mean there could be algae saprolings? Slime mold saprolings? Bacterial saprolings? I like to think so. 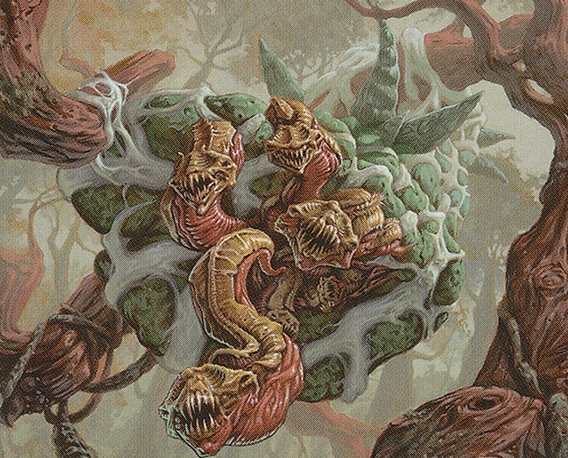 Over the years, a number of other spells would appear that could create saproling tokens even while Thallids remained glaringly absent, and for at least a few sets, they were standardized into these remarkably frightening, fang-toothed, eel-like creatures, still presumably comprised of vegetable or fungal matter. They're definitely pretty cool and I like them in the context of them as either plants, fungi or a hybrid of the two, but still a little ordinary for a monster design as a whole, and by necessity we're going to be skipping a half-dozen other illustrations of them. They're great illustrations, sure, but still all portraying roughly the same creature. Congrats, Matt Cavotta, on having the representation I liked most for this review! 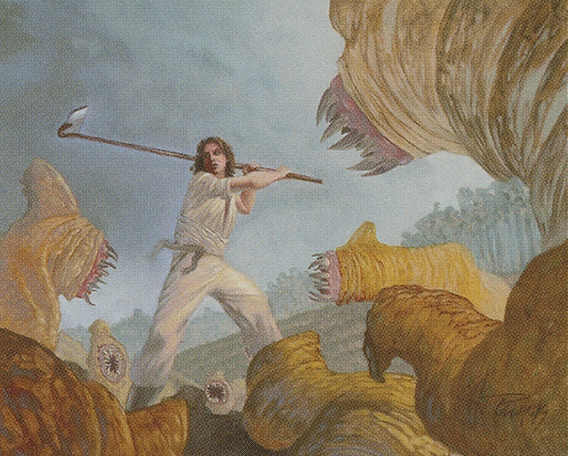 Just one painting of the "fanged worm" saprolings deviated from their usual chestburster-like appearance. Pollack's specimens are much doughier, more maggotlike, more sluggish looking, with protrusions on their heads like a shark's fin and teeth arranged in a circular, sucking maw. These definitely feel a little more like "saprolings" to me than the sleeker, more snakelike variation. I can easily see these emerging from fungus-infested compost. 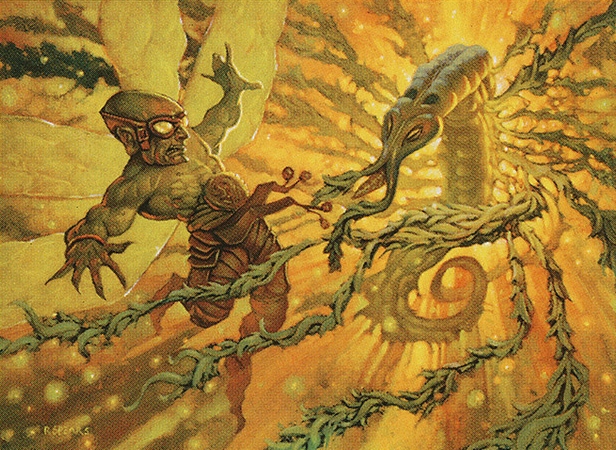 This spell simply creates a single saproling, at any time you wish, automatically blocking a target enemy creature, which is a fun idea. It also boasts a wholly unique design, a great looking wormlike botaniform with a two-pronged, squid-like face and rows of many long, tangled, prickly looking limbs! 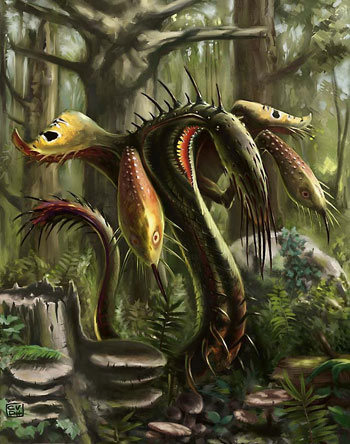 In later years, Wizards of the Coast would begin to release official, printed creature tokens at the same size as standard cards, which is neat, although you were previously expected to use anything handy to represent creature tokens, and I think that was a lot of the fun, if you got creative enough.

This is, however, an amazing looking plant monster. Another slithering, serpentine one with a flaring cobra-like quality, but with a vertical mouth beneath a thorn-covered "head" and those four venomous-looking appendages that even sport their own false eyespots! 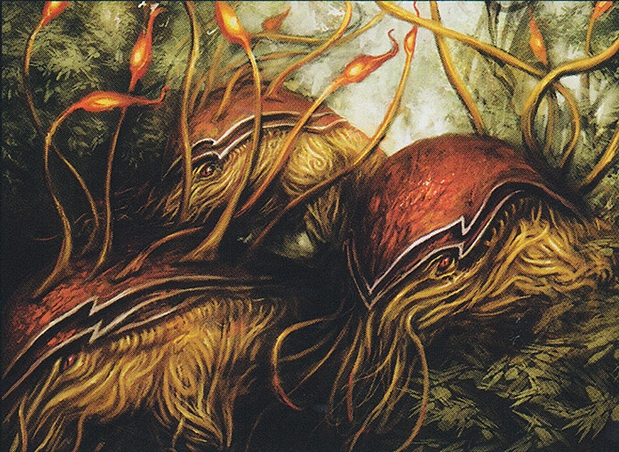 It was eventualy decided that different planes of the multiverse would have their own signature saprolings, and the illustration for "Spore Burst," I think, best shows off the saprolings of a plane called Alara. These saprolings are more tied in with carrion than a lot of others, and have an almost cuttlefish-like look to them, with scaly armor plates on their backs. 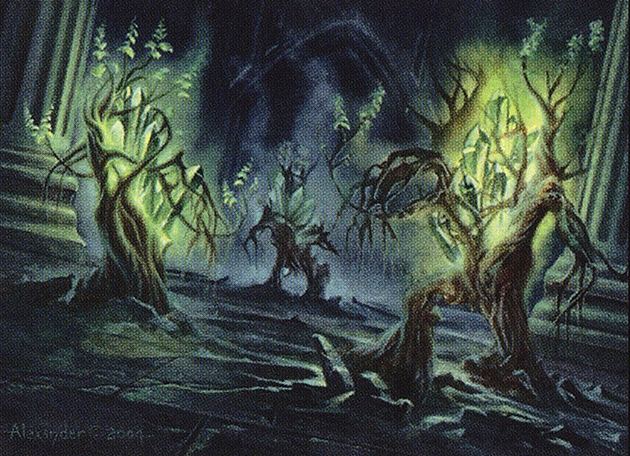 In the Ravnica setting, known for its various guilds, most saprolings form their bodies around magical crystals as their cores, as seen in this spell, and in some cases can even develop into massive green-aligned elementals. 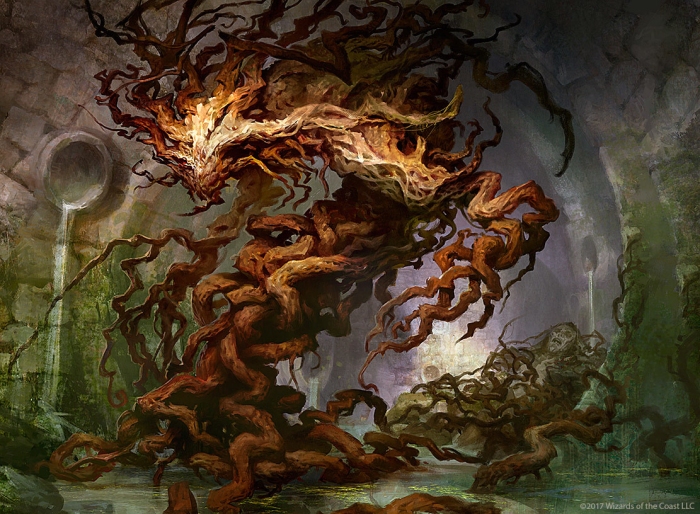 The Golgari, however, also part of the Ravnica setting, seem to have a different style of saproling all their own. I guess it's because the Golgari combine black mana with green mana and associate themselves with rot, so they swap the pretty crystal-plants for slithering, tangled roots with a slightly more corpselike vibe, also seen in this one by artis Raoul Vitale: 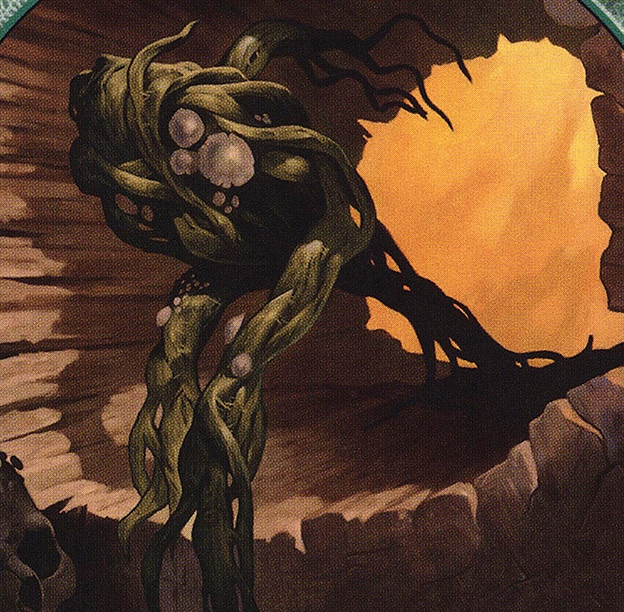 A pretty simple and straightforward one, here; just green vines and grey mushrooms arranged into a headless subhumanoid. It actually gives me an almost frog-like impression, and I can't help but read the mushrooms on the main body as "eyes." 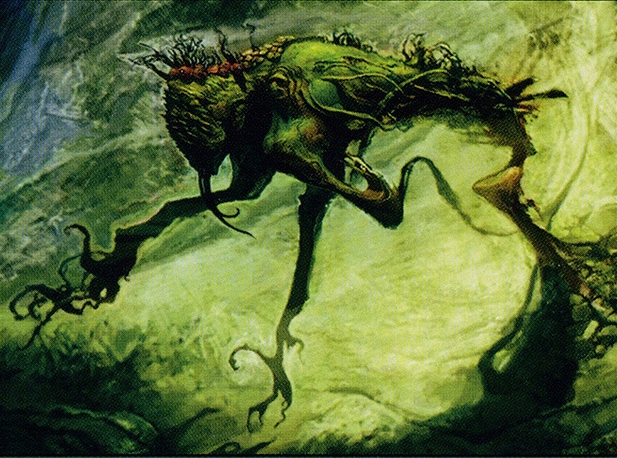 The simplest way in the game to create a saproling: a spell that gives you just one, for one mana. Great illustration, with a saproling just indistinct enough to really look like a hunk of forest floor peeling itself away into an ambulatory being. I love the fungi on the back of its head, giving me the impression of eyeballs and "hair," and the tendrils dangling from where its "mouth" might be. 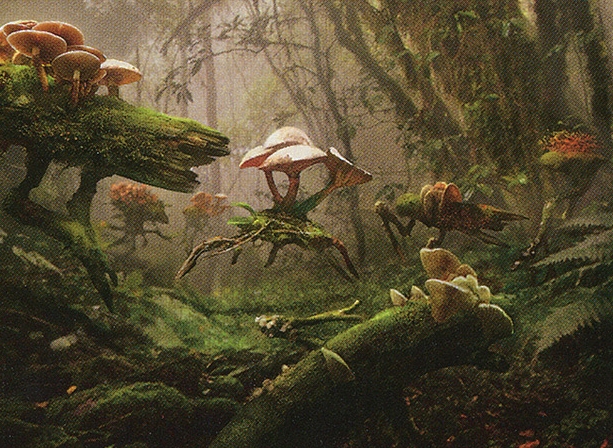 Brad Rigney's saprolings for Magic 2013 have a delightful conceptual theme going on; just hunks of rotten, fungus-infested wood animated into faux-animals. Tons of fun whether they're just a scuttling tangle or a quadrupel log, and his standalone saproling Token illustration is worth sharing as well: This one even looks a little dangerous! 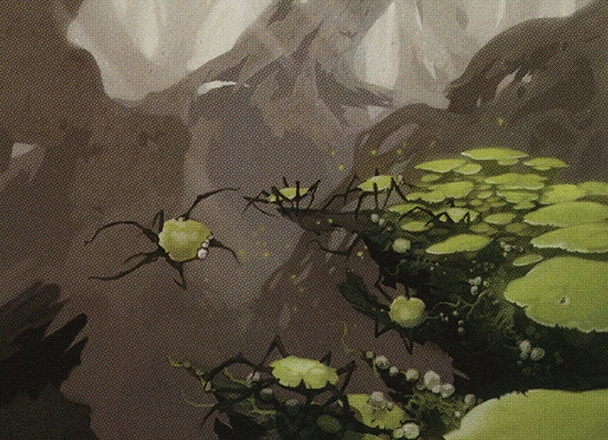 Chippy's illustration for this spell is the only time we've seen this design, and it's another really solid one; just simple, pale fungal caps with spindly tick-like legs! There's really no "wrong" way to design these things, honestly. Every possible saproling feels iconic. 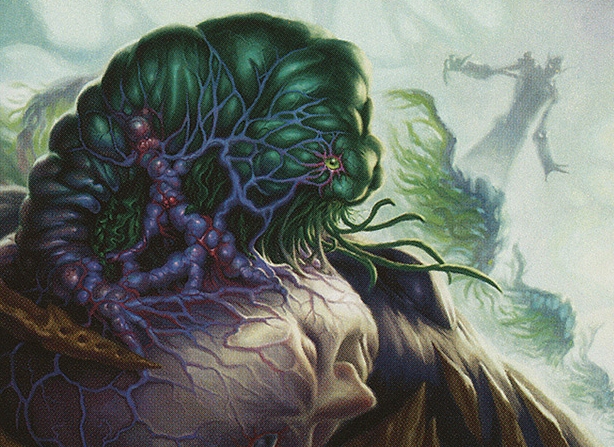 This spell allows you to choose a card type, look at your opponent's hand, and create two saprolings for every card of the chosen type, so apparently what we have here are saprolings that form from people's thoughts, or at least the magical spells in their minds. The design looks appropriately alien for such a creature, a wonderfully grotesque and veiny brain-slug-fungus with a lovely green and purple color scheme. We can also what appear to be many more of them frolicking in the background, looking almost like big clumps of seaweed once they break free from a host! 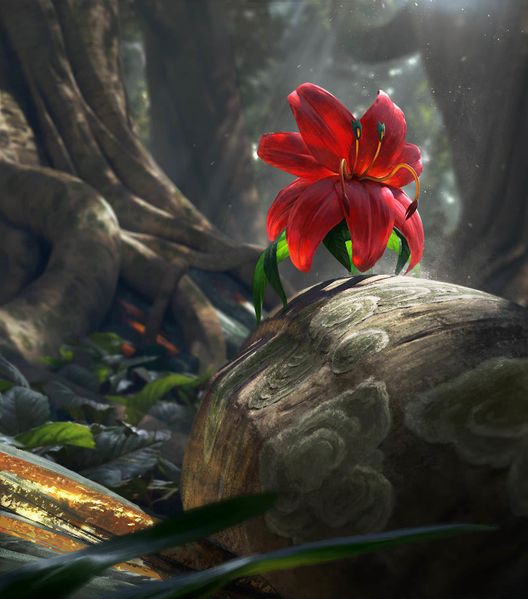 Saprolings from the Ixalan setting are a fry cry from their eerie, slimier counterparts in other planes. Ixala is dominated by a tropical jungle and even inhabited by countless dinosaurs, and its native saprolings resemble flowers that move and act like insects. A really cool concept, and it's too bad we don't see a whole lot more of them, but this little thing is just precious. The stamens evocative of crablike eyestalks are such an excellent touch! 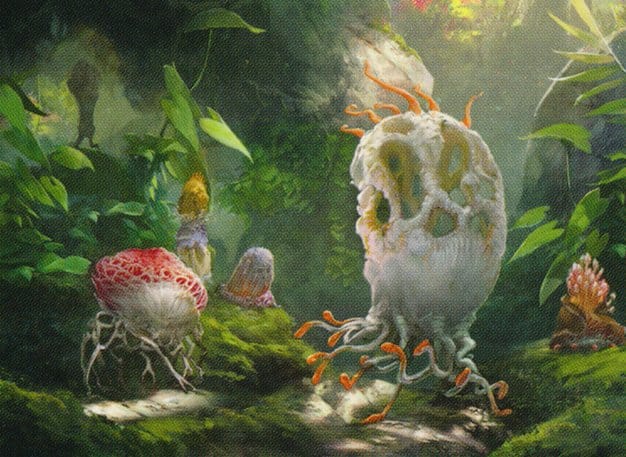 We now get into saprolings from just this year, associated with our friend Slimefoot, the stowaway and the Dominaria card set, which returns to the game's original setting and some of its most classic elements. Fitting, then, that its saprolings are so diverse! It seems as though they can resemble almost any imaginable fungus or combination of fungi, as long as they've got a way of slithering or scurrying around, and it's surprising to look back and see just how rarely these traditionally fungus-aligned creatures really looked the part before.

Christine concocts several interesting specimens here, but the most prominent is my favorite, closely resembling the more basket-like varieties of stinkhorn. 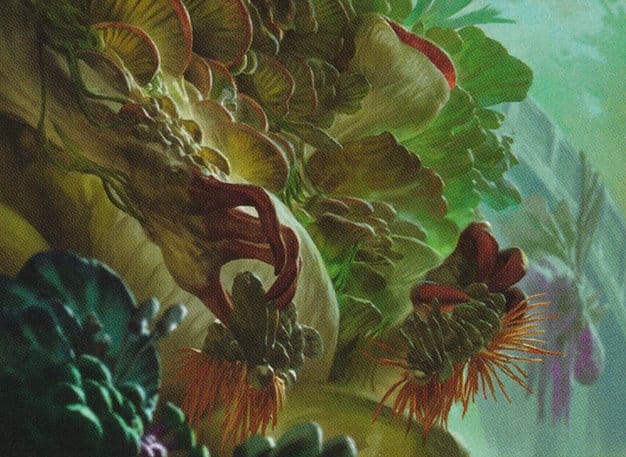 Next, on Fungal Plots, we see what appears to be a massive thallid dominating the scene, but plucking clots of fungus from itself with dozens of spindly "legs." 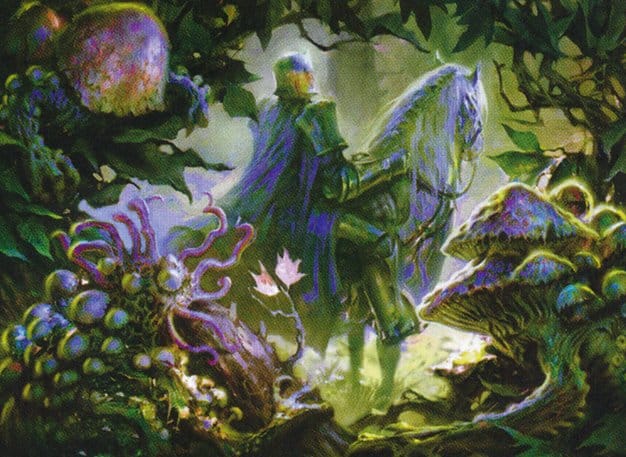 The saprolings here blend well with the foreground foliage, but we can make out two of the "humanoid mushroom" variety and one with a more tentacled, amoebic sort of form! 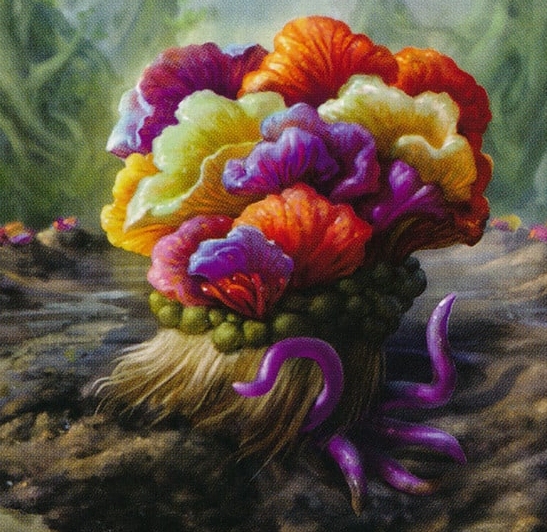 Dominaria also brings us three different token cards at once, and they might just be some of my favorite saprolings of all. Shreya's is a simply gorgeous collection of colorful fungi, creeping along on an adorable mop-like body with some gelatinous, purple tentacles for good measure. 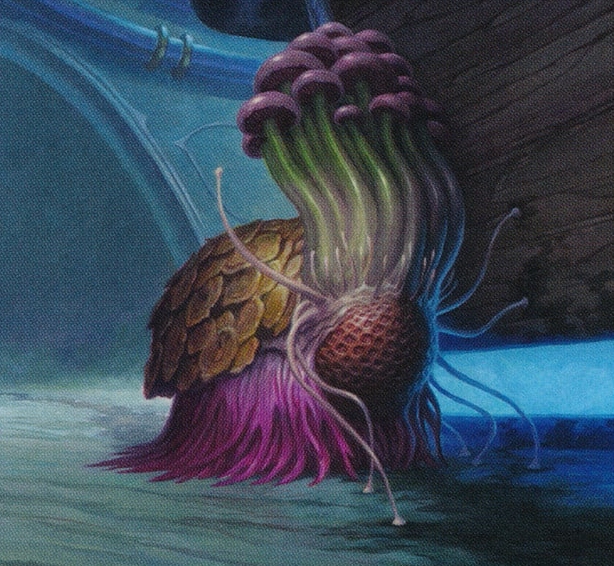 Next, we have Steve Prescott's entry, another with a sort of scrubby-brush bottom, but this time made up of very pretty branching, purple tassles. I like the hardened, brown puffball sort of "head," scaly "shell" of harder looking caps and the many pale, sucker-tipped tendrils it obviously uses as sensory appendages, overall a thoughtfully conceived, almost "bug-like" creature believably formed from fungal growths. 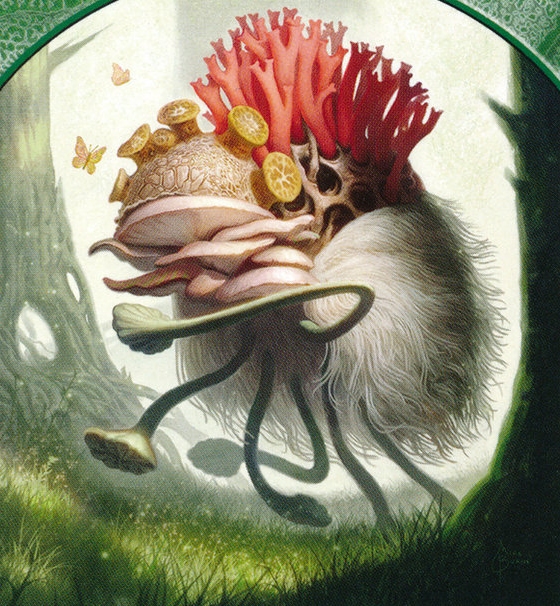 Finally, we've got what might be my favorite of three, though it is a VERY close call. Mike goes a similar route to the previous specimen, forming different fungi into a segmented, roughly beetle-shaped creature, and every choice in fungus is pretty pleasing to the eye, from the coral-like pinkish-orange tubes protruding through a withered spongy basket to the hairy rump of thin filaments, but I think it's the "legs" that make me love this one. I'm very fond of the slithering push-brooms we just looked at, but there's a lot of action and whimsy in the way this little sweetie runs around on its tubular limbs. What's the hurry!?


Back to Magic Creatures