What's that? There are only four cards in the entire history of Magic: The Gathering with the "slug" creature type? And only three other things that are even slug inspired? All the more reason they deserve a review of their own, I say; gastropoda, at least those deemed card-worthy, may be few and far between in the multiverse of Dominia, but as in real life, their slimy stalk-eyes are always a welcome sight! We're going to be reviewing these critters in reverse chronological order, rather than the usual "I say so" order, which works out just fine, since we'll still be ending on an extra-special gem... 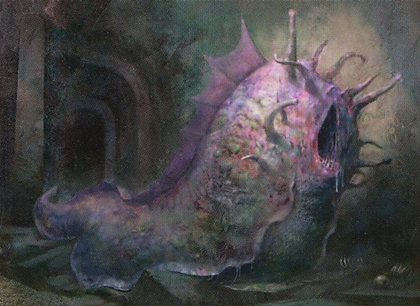 
Our first, most recent slug has no outstanding abilities or plot signifigance, but no matter; this putrid purple sewer-slider is truly worthy of the rare and coveted slug title, downright haunting in Hamm's grimy, ethereal painting style. I love the bruised, infected color palette, the four - or maybe more? - eyes waving in different directions and especially that mouth; uncomfortably vertical, and with only a lower jaw. It's like Beaker, only with slavering, needly fangs and no arms or legs. So, like Beaker without all the airbrushing. 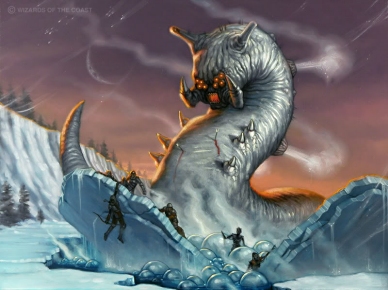 
Our second most recent example was released a whopping twelve years after the last time "slug" was ever printed as a card type. Why they resurrected such an obscure, retired category after so long is a mystery, but let's just be glad they did. Thermopod is entertainingly weird in a number of ways; a red card, the color of destruction and chaos, this pale leviathan generates heat to slip and slide rapidly along the frozen tundra it calls home. A giant, burning, murderous slug-sled. 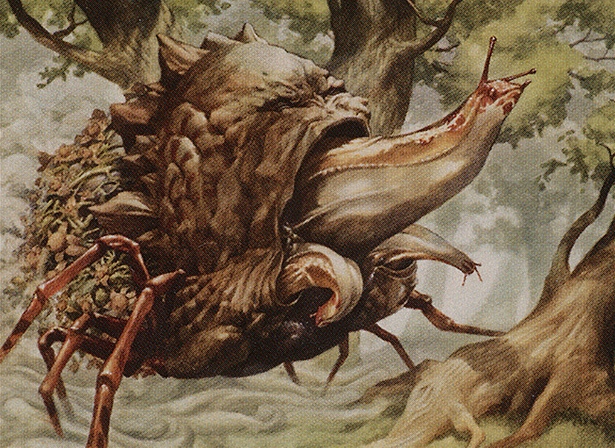 
Printed back in 2007, Mournwhelk here is the one and only snail based creature I can think of in the whole game, and the first of two cards I left out of the Elementals review. Yes, that was because I was already planning this one. Like many Elementals from the Lorwyn setting, the Whelk is a fun mix of fairy-tale whimsy and surreal horror, its multiple snaily heads looking quite serene and innocent compared to its contorted, weeping "shell"...or is that actually a huge head, with multiple snail-head tongues? Maybe the snail heads have their own happy, oblivious little snail brains and the shell-head is just along for the ride, eternally gloomy as it "mourns." What it mourns, only the snail heads know, but they couldn't care less. They kinda think he's just a big, fat baby, even. 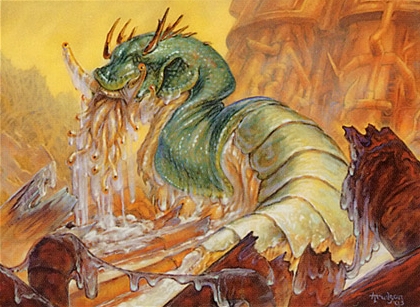 
Another cutie-face by Heather Hudson, whose work keeps cropping up in my favorites lists, this metal-eating monster showed up during the agonizing eighteen year slug-drought we already discussed, and seemed to spell doom for Gastropodal independence when saddled with the "beast" creature type, a catch-all for miscellaneous animals who simply don't fit anywhere more popular. A fine slug in spirit, the overlapping plates protecting its posterior half are pretty cool, not too far a cry from real gastropods who blur society's honestly rather arbitrary "slug" and "snail" distinction. What I really like about this one, though, are the eye stalks; not just the two we focus on first, but that there's an eyeball tipping every one of the tentacles squirming from its mouth! 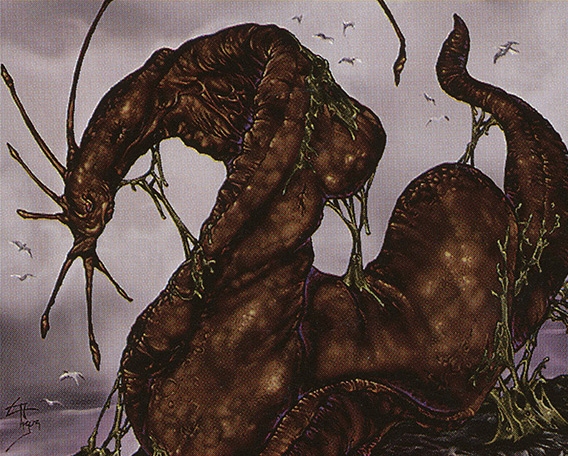 
Our other sluggy elemental, this menacing mollusk certainly makes a decent embodiment of bogginess, which is something I've obviously got a bit of an eye for. I enjoy its lumpy, twisted, globular body, and the single "crest" of tentacles over those angry little red eyes rather pleasingly reminds me of a chi....damn it.

Chickens. I really do see chickens everywhere. This looks like a giant, slimy, naked, limbless chicken to me. I don't even mind. I think that's awesome. I just want to know why. Somebody, tell me you saw it before I actually made you see it. 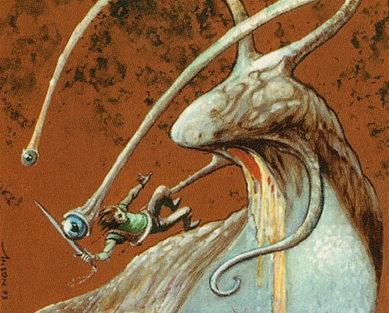 
At long, long last, we're back in true, blue-blooded slug territory with the good old, reliable giant slug. No extra bells and whistles, here; it's a slug, and it's giant. Really giant. Look at that poor sucker! Anson Maddocks gave this beastie the most delightfully sluggy, mottled flesh, charmingly eerie eyeballs and a gaping, toothless, oozing maw that almost creeps me out. I mean, it's freaking adorable, sure, but when you put yourself in the victim's perspective, being lifted into that sucking, slimy void under that single-minded, unblinking stare is one nightmarish way to go, and depending on the kind of slug this thing evolved (magically mutated?) from, it's either going to swallow you whole and slowly digest you in the suffocating mucus of its gut or slowly rasp through your flesh with its tooth-coated, tongue-like radula.

...Some of you are totally aroused now, aren't you? Don't lie, I've seen your deviantarts.

As adhorrable as the Giant Slug may be, however, it's not quite Anson's finest or even first contribution to the world of greatly enlarged, naked snails. I've shown this next card before, but it's about time I formally introduce you all to another of my utmost favorite creatures in the entire Magic Universe, and the very first slug ever printed in the game: 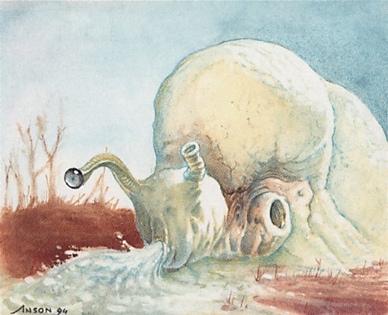 
I've gone over the pitiful, alien cuteness of slugs multiple times now, but here we have the Quasimodo of fantastical Gastropoda, a decrepit, malformed, pallid green, hunch-backed, phlegm-spewing slimeball that truly tugs at the heartstrings, even if our artist was aiming for the bile ducts. There's a hint of something just a bit disquieting in its uncannily human head shape, but it would take a whole lot more than that to scare me away from this lovable Limax...whether or not there's any justifiable reason for the poor little guy to even exist. Bear in mind, every single card in Magic represents something conjured by a powerful sorceror for use in an epic supernatural showdown. Anything goes. With a little black mana, you could raise a whole savage army of the living dead. With a little red, you could rain explosive fireballs upon your foe. Warrior archangels. Acid-belching dragons. A thing called a Nemesis of Reason. All creation at your beck and call, and what do you come out with? A spitting slug. 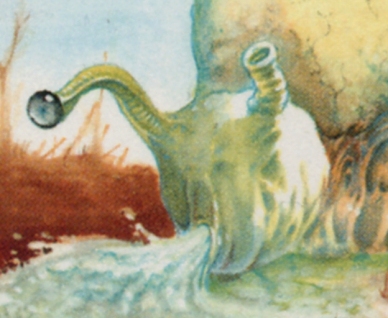 Not even a whole spitting slug, at that. You've reached into the fabric of space-time and pulled forth a broken spitting slug. A one eyed spitting slug, a set of words with alternate connotations I almost feel too bad to call attention to. Almost.

The only conceivable explanation for such a ridiculous, strategically humiliating decision is that you were probably stuck with me for your palace advisor. "Sorry about that!" I say as I ride inch by inch into the sunset upon a steadily retching mollusk, not actually sorry at all, "I'll make it up to you, I promise. Ever heard of a Festercreep? No? Oh my gosh, you're gonna love this..."