The Nightmare World Of...

We all know the plot of Pac-Man, don't we? There's a maze, for some reason, and it's full of...beans? Yeah, that sounds right. Those could be beans. Pac-man is a thing that exists to eat all of the beans, but there are some pillowcases that don't want him to, and the only thing that can protect him from their deadly cnidoblasts is the temporary high of an ultrabean. He continues eating beans and fleeing from his googly-eyed predators until he either dies, everybody gets tired and leaves or the game breaks down exactly 256 levels in.

It's a simple, classic formula that doesn't really need any expanding on, does it? I mean, any attempt to squeeze a more complex story from Pac-Man is going to be as arbitrary as writing tiddlywinks fanfiction, right? When I first heard that Namco was going all-out for a Pac-Man reboot with a Disney XD animated series, action figures and an Xbox game, I thought it may at best prove a cute, but forgettable attempt to breathe fresh relevance into a one-note character.

And I was so so wrong.

Pac Man and the Ghostly Adventures is one of the most absurd, juvenile, cheesy cartoon series I've possibly seen this decade, so obviously I was reeled in immediately on a profoundly intellectual level, but underneath its attractive candy shell of shamelessly cornball puns, radical hoverboard chase sequences and fart jokes is a background story more dramatic, more terrifying than you could have possibly ever suspected. How terrifying? Well... 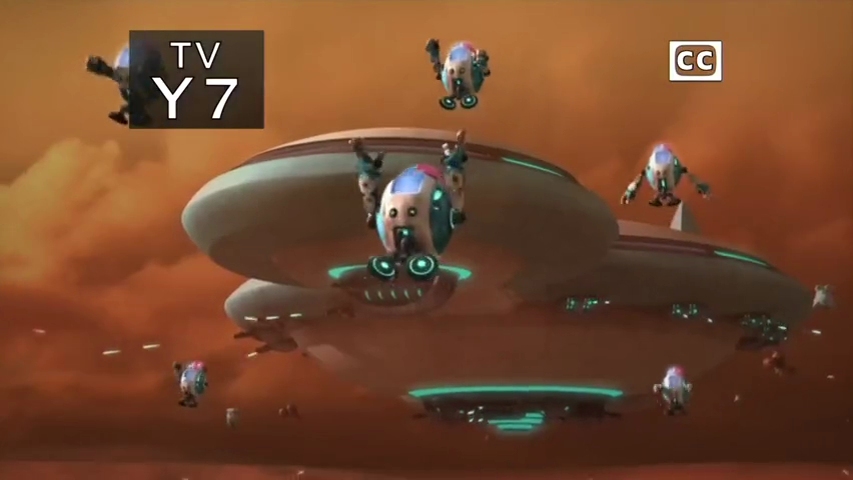 Our first episode opens with a flashback to an epic war, ravaging pac-world with explosions visible from space. These were known as the "Ghost Wars," or "Pac-World War," and supposedly ended almost a century before the series begins, though this time frame is either immediately contradicted or pac-people are incredibly long-lived.

I say this because our hero, Pacster, is currently attending high school, but his parents were casualties of the Ghost Wars not long after he was born. Yes, a Pac-man cartoon hits us with dead parents in only its first few minutes, and not just any dead parents, either. If you hadn't guessed already, those would have been the original Pac-Man and Mrs. Pac-Man. Pac-man and Mrs. Pac-man. Dead. Casualties of the first World War. Jesus.

Pacster's misery doesn't end with that of your garden-variety war orphan, either, because we're also told he's the last yellow pac-person alive on his entire planet. We're never told how many existed before, but yellow people were apparently Pac-world's ruling class before they were systematically exterminated by enemy insurgents.

ONLY ON DISNEY XD, KIDS! 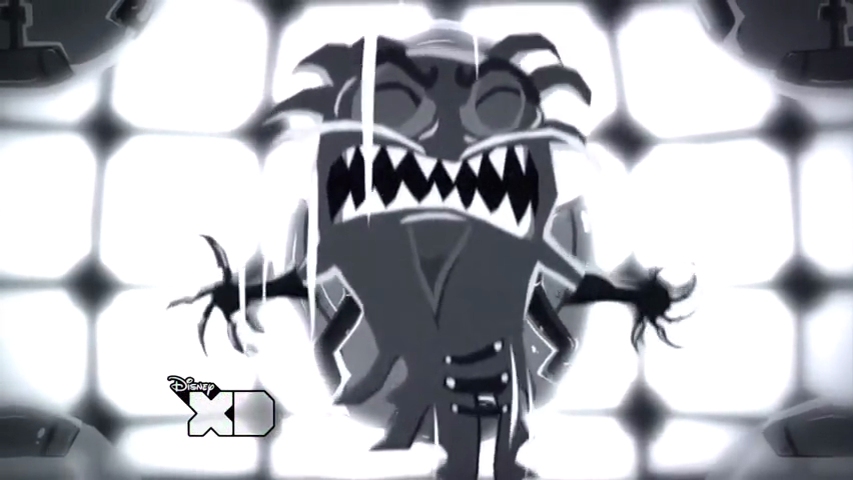 And what became of those insurgents, you didn't ask? In the terrible aftermath of Pac-World-War, a machine was designed to separate the consciousess of a pac-person from its physical body, creating what Egon Spengler would refer to as a free-roaming partial-torso apparition. The body would then be placed in stasis at a top-secret government depository, while the "ghost" would be banished permanently to a place pac-world just calls the "Nether Realm," but with its lakes of fire, slavering demons, horrible stench and putrid maggots for every meal, we all know it's hell. There's even a Cerberus! 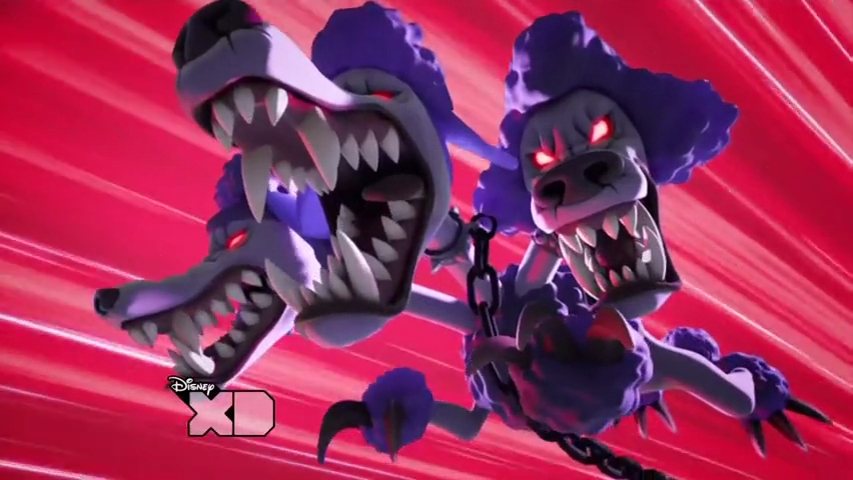 This twisted punishment was exacted upon the entire losing side of the P.W.W, a mass execution and damnation of several thousand people administered by the very government Pac-Man and Mrs. Pac-Man were fighting to defend. Granted, they're still keeping all the bodies nice and safe, but the banishment of enemy ghosts is explicitly described as "eternal," and the possibility of returning one to its corporeal vessel is an untested hypothesis until later in the series. It's stated outright that ghosts are dead, even if it is theoretically reversible.

Thousands and thousands of people. Rounded up and killed by the world government as vengeance for slaughtering everyone unfortunate enough to share a particular skin color.

ONLY ON DISNEY XD! 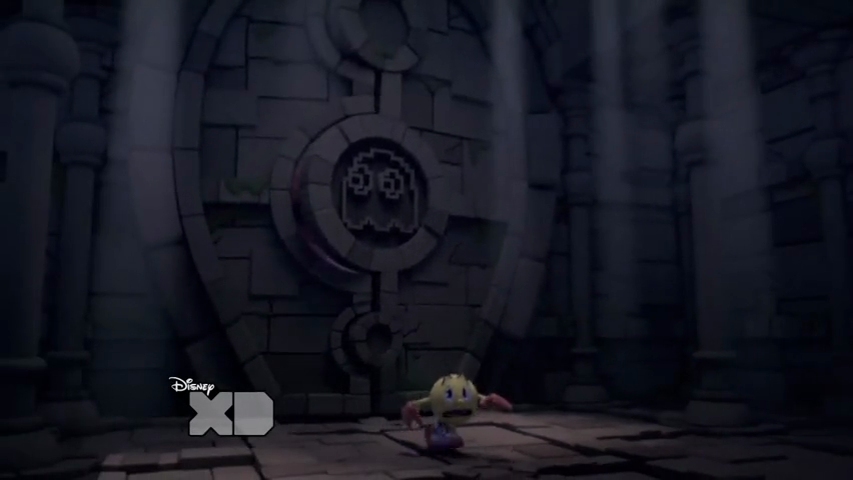 In retrospect, a good old fashioned gas chamber might have been a smarter move, or maybe, I don't know, just prison like any sane civilization, since the regime that nearly conquered the globe is now just made up of unkillable, supernatural monsters held at bay by only a thin interdimensional barrier. Unsurprisingly, it's our own Pac-Man who ends up breaking the ancient seal between the two realms, deep within the heart of - what else? A maze! A maze rather amusingly labeled #256.

....And this brings us to the single best reason to watch this crazy nonsense at all, if not the best reason watch damn near anything, ever: the villains. 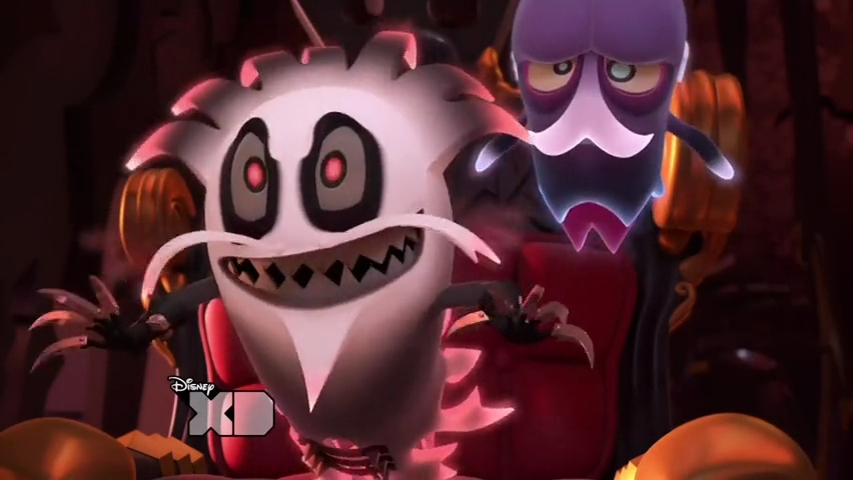 If your mother named you something like "Betrayus," could you honestly go through life and not feel obligated to live up to it? Brother of Pac-World's president and mastermind of the original Ghost Wars, this angry, sniveling, lovably melodramatic goth now rules over the Nether Realm as "Lord" Betrayus, with the assistance of his butler, who has a butt for a head and is apparently actually named "Butt-Ler." Seriously, see what happens when you give your kids these joke names?

You're keeping up with all this easy enough, aren't you? At this point we've basically covered most of the backstory explained in the first episode. Yeah, I can't say I was expecting to hear about that much genocide in the first twenty minutes of something called "Pac Man and the Ghostly Adventures." 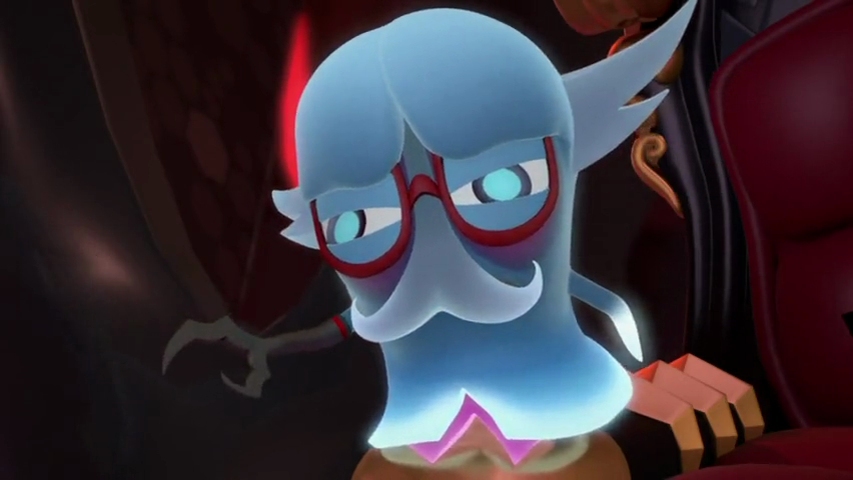 Assisting Betrayus in his fiendish quest are an impressive array of minions and monsters, chiefly Butt-ler's diabolically brilliant brother, Dr. A.H. Buttocks. Hahaha. "A.H." Pac-world parents, I swear to god. Do I even have to tell you that Buttocks speaks with a thick German accent? You could tell just by looking at him, couldn't you? Like any cartoon "scientist," he seems to have a background in everything from zoology to engineering, always concocting one dramatic doomsday weapon or another. 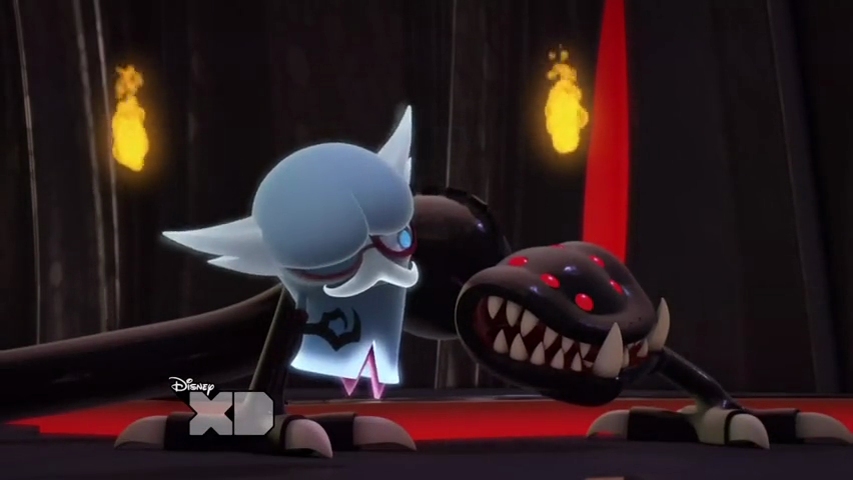 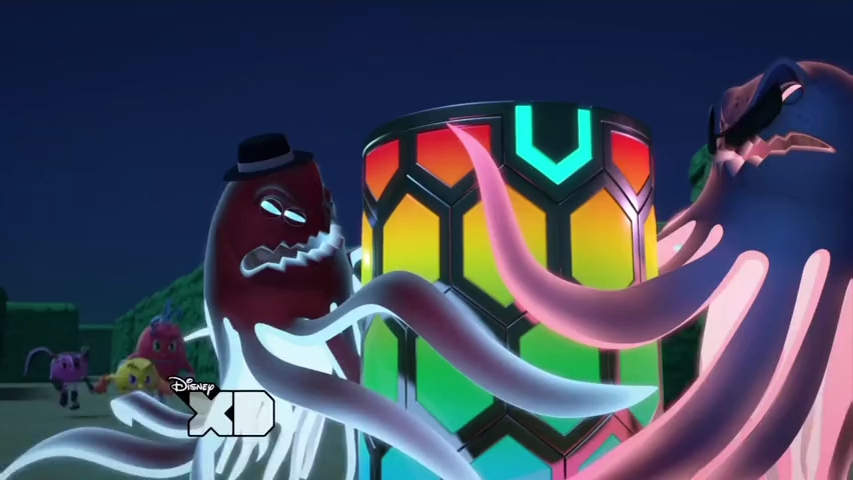 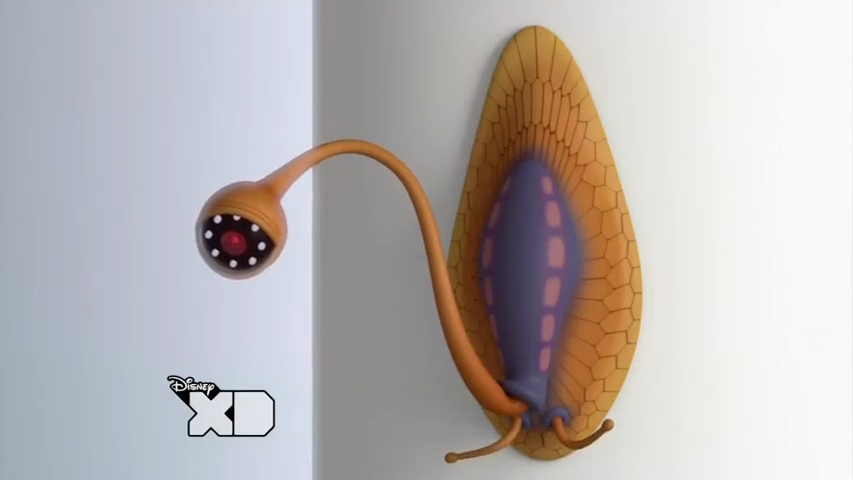 Other denizens of the abyssal plane include some very pleasantly designed monsters, such as the slimy, dragonfish-like "stalkers," giant tentacle-ghosts and the gorgeously rendered, utterly adorable spy-slugs, who even get a nod here and there as sentient characters. Most importantly, however, are Betrayus's vast legions of colorful, googly-eyed sheet phantoms, four of which we already know quite well... 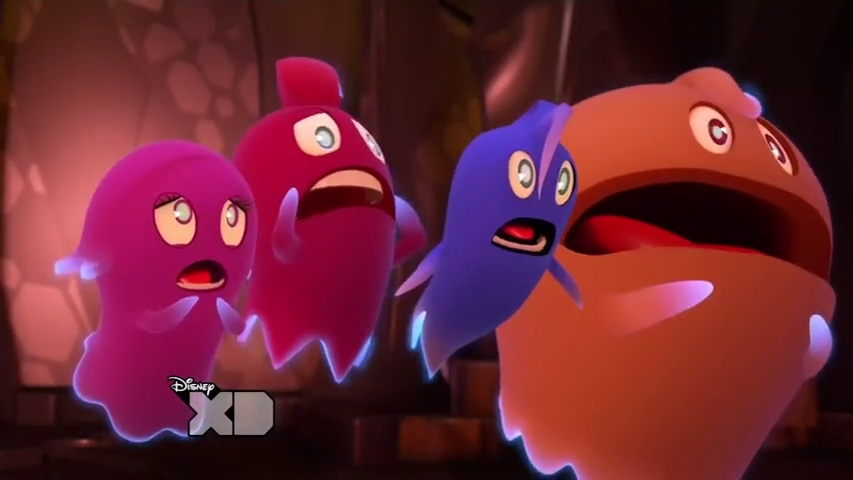 Inky, Pinky, Blinky and Clyde are possibly the second best thing about this series, their personalities actually based directly on their unique behaviors from the original arcade game: Blinky is the ringleader and the most stable of the bunch, Inky is more conniving and dishonest, Pinky the "ambusher" becomes Pac-Man's infatuated stalker, and Clyde comes across as the slow, dopey one of the group, but actually displays the most intelligence, if socially awkward.

In an unexpected twist and pretty interesting plot device, these classic adversaries actually end up befriending Pac-Man junior and operating as double-agents, working out a deal to get their bodies back when all this blows over. They still seem to get a kick out of terrorizing the living, though, and who can blame them? May as well take advantage of a vaporous, undead body while you can. 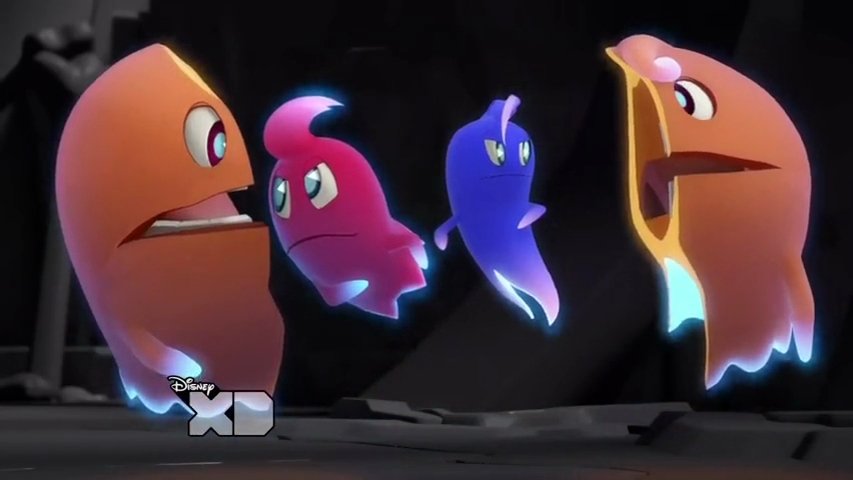 Disturbingly though, the quartet don't seem to have been that much older than Pac-Man and his high-school friends when they were initially rounded up, executed and condemned to an eternal nightmare in the reeking pits of the underworld. Who was supposed to be the "evil" side again? 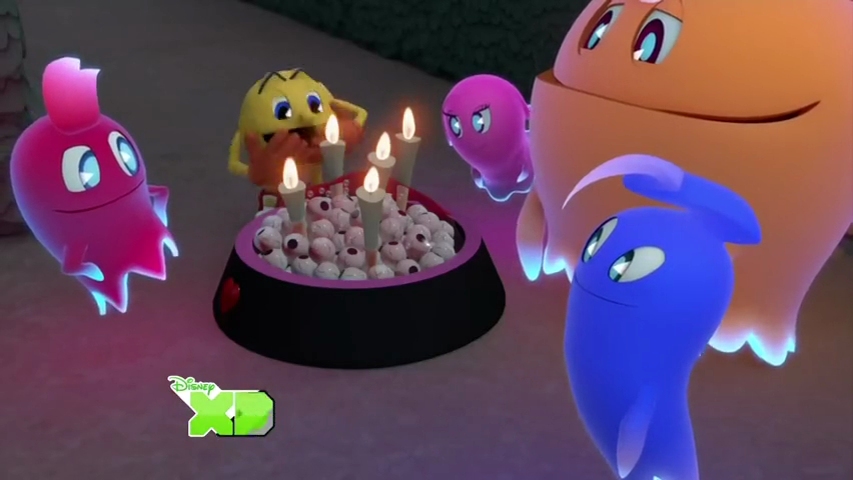 At this point, maybe you're wondering just what Pac-Man's role in all this is beyond having dead parents and dooming the whole world, noteworthy though these accomplishments may be. As it turns out, Pac-man is the only thing that can keep his world safe from the very horrors he mistakenly unleashed, because he's also the only thing even more monstrous than whatever the legions of the damned can throw at him. 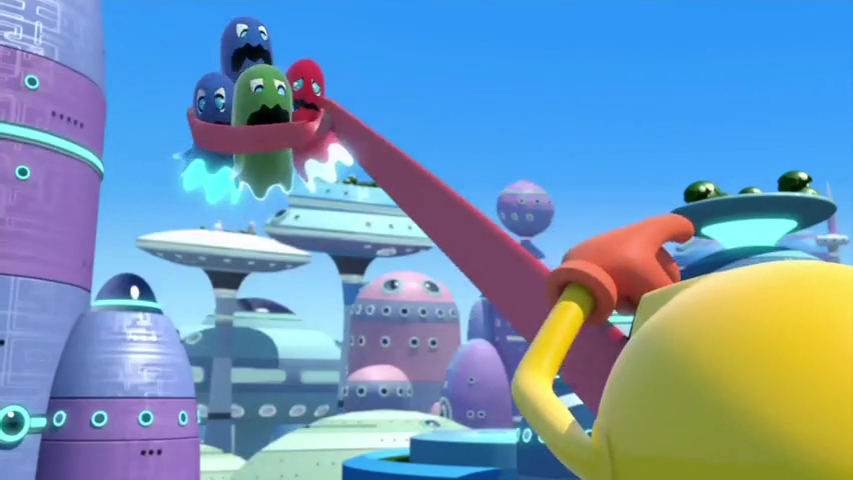 Pac-man's infamously broad appetite is not, in fact, at all normal for his species, but a characteristic completely unique to the yellow master-race. This is just another reason Betrayus sought to eradicate them; a yellow pac-person can eat literally anything, in seemingly limitless qualities, organic or inorganic. Bullied throughout his life for being such a disgusting, all-consuming abomination, we've seen Pac-Man eagerly wolf down scrap metal, rotting garbage, demonic dog saliva, the contents of entire buffets, the food supply for the entire city, and most importantly, the roaming souls of the dead themselves. 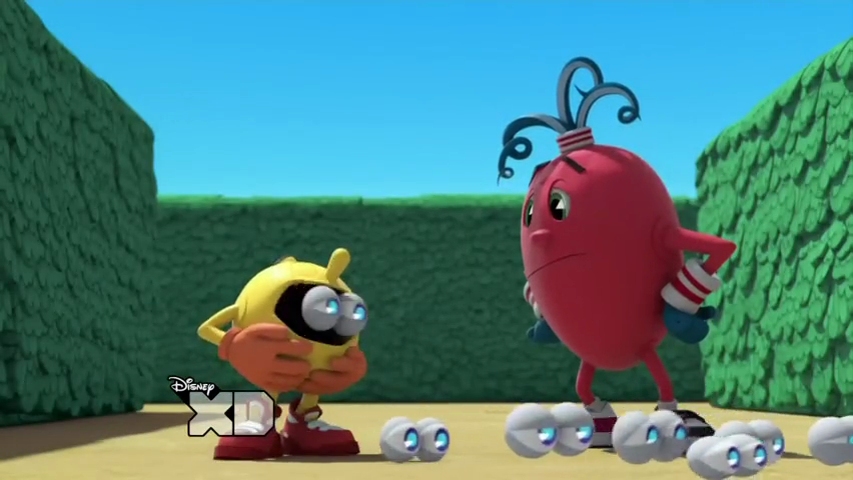 Pac-Man's mighty digestive processes are apparently the only means by which a ghost can be even temporarily "defeated," destroying everything but - as we all know - the eyeballs, the true seat of ghost consciousness. The oculars need only return to the Nether Realm's regeneration chamber for a new spectral body, but the whole "digested down to the eyes" process is implied to be every bit as traumatizing as it sounds, unless you're Pinky, who admits she doesn't mind passing through her "Pac-um's" two-way gastric system. To be fair, she's also several times his age and has dated tentacle monsters, so Pinky might just be a bit....kinky. 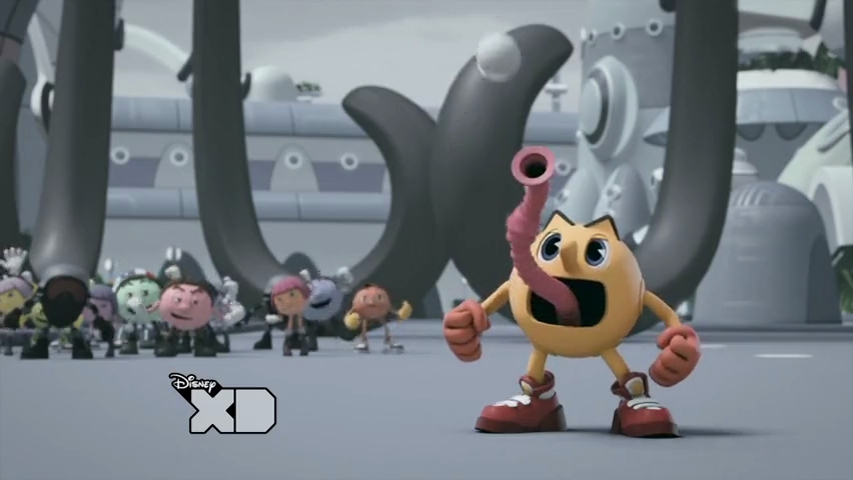 Aiding the yellow devil in his predatory rampages are an arsenal of weird powers and transformations, an endlessly stretchy tongue, and ghastliest of all, a sort of horrible, vacuum-like eversible pharynx, not unlike that of a planarian or an echinoderm. Pac-man eats more or less like a starfish. A starfish with some sort of singularity inside. 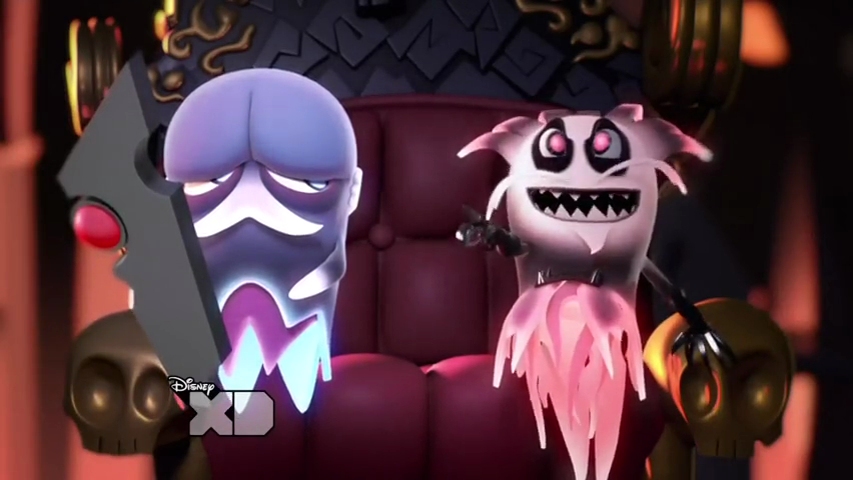 This has already stretched on a lot longer than I thought it would, and we still haven't covered much more story than the very first episode - or even half the recurring characters. This cartoon. Is bonkers. It mixes a staggering amount of imagination with kiddie comedy so campy that it's difficult not to be charmed on some level. Maybe you'll enjoy it "ironically." Maybe you'll just enjoy it enjoymentally. Maybe you'll burn your computer and swear a life-long grudge against me within five minutes of any given episode.

Whatever, I like it. It's stupid and crazy and infantile and I cannot wait for the second season, especially now that the last couple episodes introduced another villain... 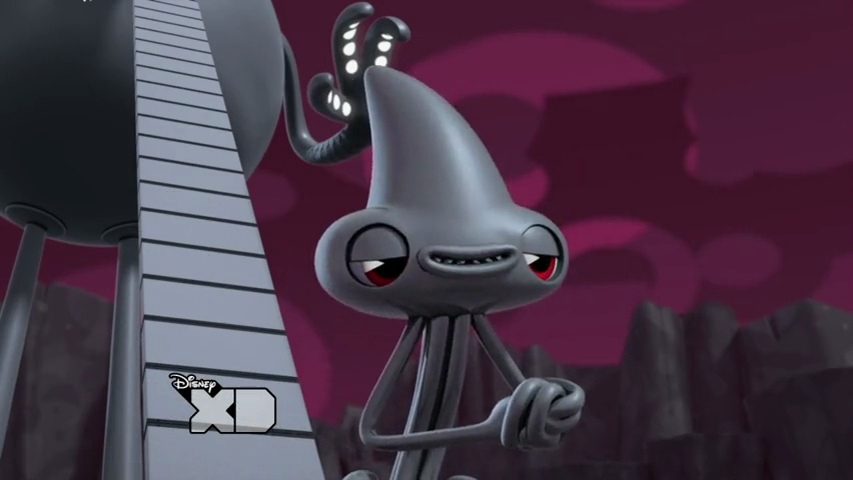 ...A villain I feel like we've seen somewhere before, and I don't just mean that he's one of those Japanese octopus-martians. 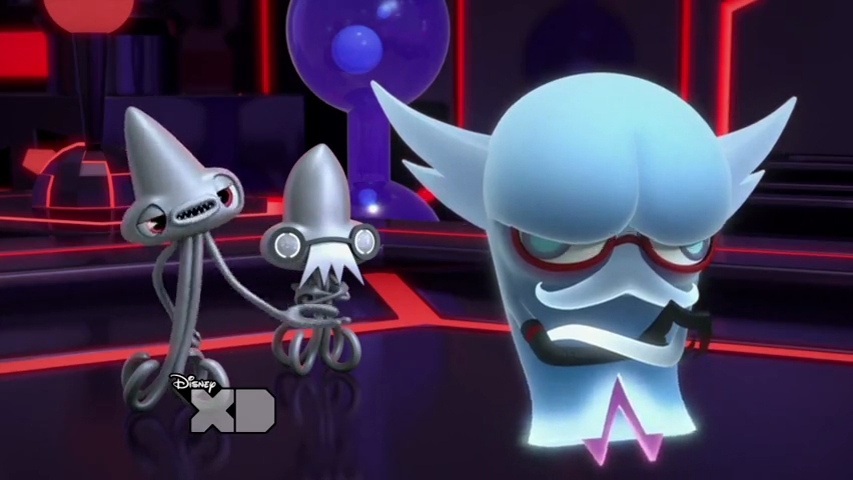 No, there's something else about this guy, something that feels...strangely relevant to a Pac-Man cartoon. 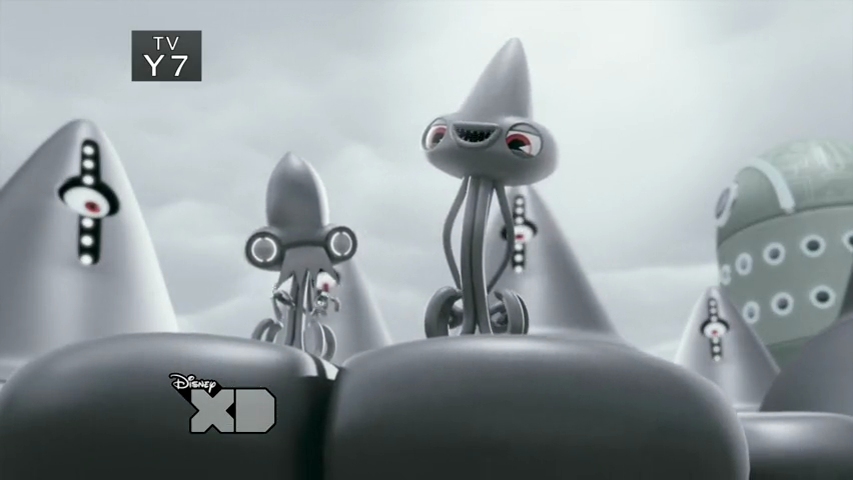 If only I could put my finger on it...