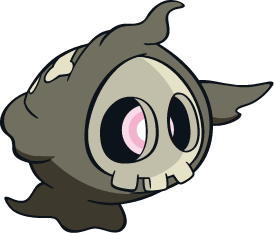 Oddly enough the only ghost pokémon with a skeletal motif, Duskull is no more than a huge, cartoonish skull with a simple, tattered shroud and a single luminous eye freely floating in its hollow interior, even swaying from one socket to the other in most of its animations - an adorably stunted reaper ticking down its victim's life span. Everything about this flying Halloween mask is appealing, and I can definitely get behind its child torment policy. I can't honestly call it my favorite pokémon - there's a lot of competition there - but I'd objectively nominate it for best pokémon, if that makes any sense. 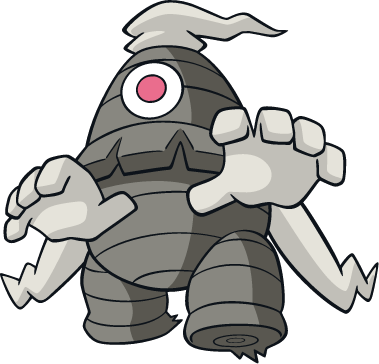 Duskull's evolved form unfortunately loses a bit of that cute charm in favor of a very different design, but still damn cool in its own unique way. While I wish it hadn't dropped the skull face, I really enjoy the unnerving, emotionless stare and blocky, monolithic feel of Dusclops, which always gave me the unintentional impression of a giant, lumbering tombstone. In one of the pokédex's more terrifying claims, its body is said to be entirely hollow, and irretrievably absorbs people, objects or even souls like a wandering black hole.

While the design here seems to be aiming for a mummy-like feel, there's another monster in there, less familiar to most English speaking fans: The chochinobake - literally "paper lantern spirit" - is a form of tsukumogami in Japanese folklore, an inanimate object that has transformed into a supernatural monster. What resemble "bandages" encircling Dusclops also reference the bamboo ribbing of these collapsible lanterns, with Dusclops even collapsing the same way in its 3-d appearances. While we can see that there's a lot of variation, chochinobake are most commonly depicted with that same singular, circular eye. In a nutshell, Dusclops is an "inverted" lantern, filled with inescapable dark matter instead of light. Wicked!

Both of these pokémon were favorites of mine since their third generation debut, but once the fourth generation rolled around, Dusclops was granted a brand new evolutionary form I was eager to see. Would it return to its skeleton roots? Would it focus even more on a giant, staring eyeball? Maybe it would delve further into either its mummy or chochin side? No such luck on any accounts. Dusknoir here has next to nothing in common with either of its previous forms, and I have to say I still don't know exactly what I'm looking at. Don't get me wrong, I can't deny there's something fairly imposing about this fat phantom, I like the stomach-jaws and I can clearly see why it has so many fans, but it's never felt to me like a natural fit for Dusclops, and there's a lot I find awkward in its busy design. What are those things sticking out of its neck? Are those the remnants of its teeth?

And on another note, "Dusknoir?" Really? "Duskull" and "Dusclops" are cool, clever portmanteaus that roll right off the tongue, but "dusk" and "noir" are simply two complete words carelessly glued together. Try to sound out "DUSK-NWAHH" {or worse, "Dusk-nwarr" as they officially pronounce it) nice and smoothly. You just can't. They certainly couldn't have run out of scary things that flow from "dusk"...there's crypt, creep, crawl, screech, scream, scare, and my personal choice, scowl. Not only would "Duscowl" be easier to say and fall within their established naming convention, but this monster is, in fact, scowling. It was right in front of their faces, all along! Is that thing flying? God help us, why is it flying?


On the upside, Pokémon: Black & White introduced a pretty kick-ass item, the eviolite, which boosts the defenses of any un-evolved pokémon. With Dusk-noo-arr's defensive stats only minimally higher than its predecessor to begin with, a boosted Dusclops actually surpasses the durability of its evolved form and even sees more use in online battle. Sorry, Dusk-neww-air. You're kind of a cool guy, and I see that cute little Gundam shout-out in your eye, but I'm really glad that Dusclops pulled ahead in the end, even if he's already a harsh departure from Duskull. Actually, can we just flip this whole line on its head? Dusknoir can evolve into Dusclops, and Dusclops can evolve into Duskull! I know Duskull is the smallest, but Dusclops is a black hole, right? Maybe he implodes into Duskull!

In another ill-conceived attempt at aping pokémon's design style, I've taken what I like about all three of these specters and mashed it together into my dream vision of "Duscowl," the eyeball-skull-ghost-lantern that will never be: I know it isn't actually scowling anymore. Shut up!