I've expounded on their biological inspirations, recently wrapped up a monster list of more things they could draw from, judged their Halloweenery, played most of their core video games and dressed up as one for some kind of, like, awesome webmaster convention, but I still can't get Pokémon out of my system. I probably never will.

I resisted for as long as I could, but after more than fifteen years in love with a franchise I was a little old for to begin with, I'm reduced to just reviewing the damn things individually. With what frequency, I can't quite say, but I can think of a couple hundred right off the bat that would give me something unique to talk about. I could easily review pokémon with some kind of regularity for the remainder of my miserable existence. 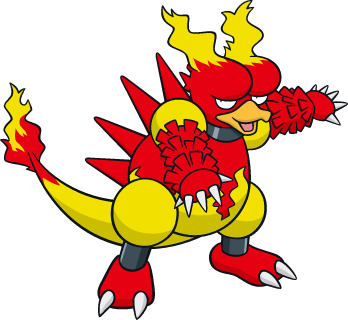 Magmar was one of the earliest pokémon to really put the "monster" in "pocket monsters," resembling no particular animal or even genus of animal - unless a seahorse knocked up an Iguanodon who gave birth into a particle accelerator. An odd man out of the first generation, Magmar didn't even evolve, hanging out in the deep end of the Pokedex near other one-off freaks like Electabuzz and Mr. Mime. 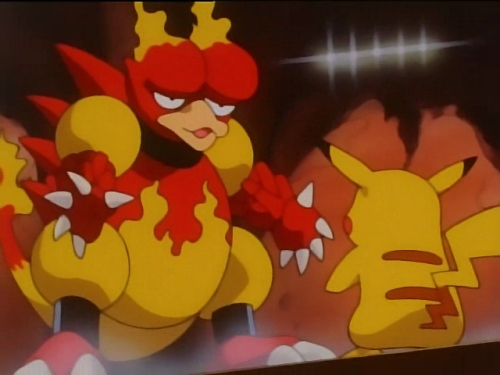 What always made Magmar stand out above every other combustible fiend was a face only a morlock could love; the flame-spouting platypus bill and melancholy eyes slung beneath a bulbous, buttocks-like cranium gave an otherwise generic design a lot of personality, hearkening back to the lovable ugliness of classic Japanese Youkai and an array of cheesy B-movie monsters...especially one particular B-movie monster: Meet the "Solarite" from the terrible 1961 Science Fiction flop, The Phantom Planet, one of those films that only survives on compilation DVD's from the Dollar Tree and as an episode of Mystery Science Theater 3000. And yes, the Solarites share Magmar's affinity for volcanic environments. They live on a sun, or something. I don't remember anymore. The similarity is just tenuous enough to be coincidence, but striking enough that I can't completely rule out a possible connection. It certainly wouldn't be the first or even the most obscure movie monster to inspire a pokémon. On a more personal note, the first thing Magmar ever reminded me of were the enemy designs from the original Metroid; in particular the fiery inhabitants of Norfair. He doesn't look like any one creature in particular, but Wouldn't he look right at home with these guys? The bottom right, incidentally, was the original incarnation of Ridley. I have to say I always found it more interesting than his later appearance, but this isn't a Metroid monster review! That's for another day! Whether spawned directly from the dark recesses of Satoshi's soul or from foggy memories of a low budget space drama, Magmar was always pretty interesting and really looked like the sort of loathsome brute that would swim around in molten rock. He wouldn't be a one-shot for long, however, as the second generation finally showed us what a cute little baby Magmar would look like. Magby here gave Magmar the gift of childhood, with an even sadder fish-face and even lumpier cranium! ...Then, in 2006, the unthinkable happened - or so a number of fans seemed to think. A full decade after Magmar first reared his malformed face, Pokemon Diamond and Pearl brought us a third, final stage in the lava creature's life cycle, the bigger, fatter Magmortar. Never again would Magmar be the king of his castle. Now and forever, Magmar would only be an immature stepping stone between two other monsters, and those who care about such matters have been rather starkly divided. With just a few simple changes, Magmortar seems to shed everything the world had grown to love about Magmar. Its bill ceases to be a protrusive nozzle. Its eyes no longer beg to die. Its skull doesn't look like an ass. I, like many others, balked at this arrogant newcomer and still reserve a softer spot for his predecessor, but I have to say I warmed up to 'mortar rather quickly. It's different, but it's still a weird, tubby duck-demon that lives in volcanoes and its arms are also fireball guns. That has to count for something. I'm still not sure how I feel about it looking so damn pleased with itself, but I like how this doesn't happen until it's finally down to just one lump on its head. Were those just painful tumors all along?

If you're still on the fence about Mortar, here's a little fan art by Sailor Clef I find absolutely darling: