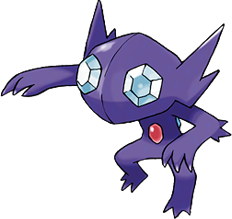 Originally appearing only in Pokemon Sapphire, Sableye was the first monster in the series to ever be both a "ghost" and "dark" type, the only possible combination with no outstanding vulnerabilities to any other type in the game. It's an interesting distinction for an equally interesting monster; lurking deep beneath the earth in caverns and mine shafts, the diminutive gremlinoid thrives on a diet of rocks and minerals, its own huge eyeballs crystallizing into unblinking, luminous diamonds. Fans have tossed around a lot of theories when it comes to the little guy's conceptual roots, from various trolls, fairies and demons to Tolkien's Gollum, of all things, but if anything in particular inspired Sableye, there's only one possibility I can agree with: 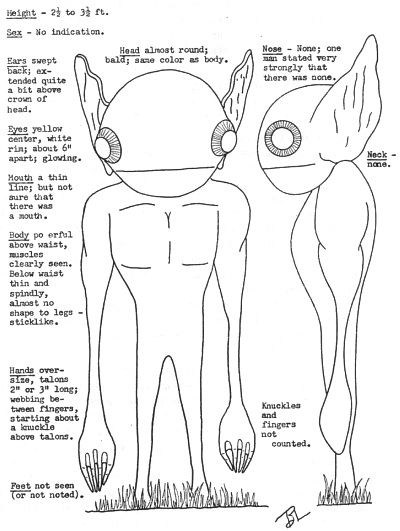 In 1955, the Sutton family of Hopkinsville, Kentucky claimed to have spent an entire night defending their homestead from a band of terrifying "goblins" who allegedly arrived in an unidentified flying object. They described these disturbing beings as roughly child sized, with huge heads and powerful clawed arms on relatively stunted bodies, fan-like ears and massive, brightly shining round eyes. Bullets fired at the creatures were said to bounce off their gleaming metallic skin, and their claws sliced easily through the home's metal roofing. They held their arms up when they walked "as though wading through water," and constantly swayed their hips in a silent rhythm. When shot down, they were said to drift to the ground in defiance of normal gravity, and got back up without a scratch. The presence of feet or a mouth were notably uncertain, the "witnesses" sketching them both with and without oral slits.

This fantastic tale of Allegedly Real Aliens remains one of the most famous around the world and is particularly well remembered in Japan, where the goblins have made a number of video game, anime and manga appearances. Here we have a version from Chocovaders, a very pokémonesque game and toy line revolving around space aliens. A diamond eating inner-terrestrial is a uniquely original twist, but it's otherwise plain to see a link between the Hopkinsville case and Sableye's design; the entire body shape, the mineralized surface, the spotlight eyes, even the fact that Sableye's mouth is often invisible when shut - though I wouldn't have expected those maniacal piranha teeth, which easily double the monster's appeal. Even its three dimensional animations mirror some of the finer points from the report, albeit with a lot of added character:


Jittering like a claymation puppet, skulking around the battlefield and smiling in response to pain, polygonal Sableye exudes significantly more personality than many of the other monsters - there's seriously something not quite right in that crystallized brain, and whatever it is, it seems fairly happy that way. I normally don't even care enough about "competitive play" to talk about a pokémon's in-game strengths, but Sableye's mechanics even further reflect a twisted little mind; with rather mediocre stats, Sableye would see little use by "serious" (stuffy) players until Pokémon Black & White, when the plucky imp was graced with the Prankster ability. With this characteristic, pokémon automatically make the first move in battle so long as they aren't selecting a damaging attack, allowing little Sableye to shame even the toughest legendary pokémon with strategic status-altering moves before they lay a finger on it. It's still small and frail, but like a true goblin, it compensates by being just a crafty little bastard. In one of my very rare attempts at "fan art," I conceived my own Sableye evolutions based on other legendary space-monsters, the Flatwoods Monster and Mothman, but as much as I'd love to see either of these entities in pokemon form, Sableye really doesn't need to evolve. What's there to improve upon? It's just too damn precious, and some tiers of online play have had to restrict its use for being such a monumental pain in the ass. I'm sure Sableye would consider it a medal of honor.