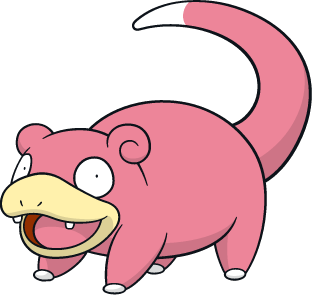 Good old, dopey Slowpoke, such a classic icon of the pokémon franchise that it's easy to forget just how weird it really is. It's been compared to a salamander, an otter and even a hippopotamus, but doesn't really call to mind any known animal and was probably never intended to. It's just an odd, amphibious beast whose vacant stare, inactivity and delayed reactions bely terrible mental powers, making it part water type, part psychic type. It supposedly "fishes for prey" by dangling its tail in the ocean, implying a diet of other water pokémon, if you can wrap your head around that brutal visual, but not everything that takes the bait becomes a meal. 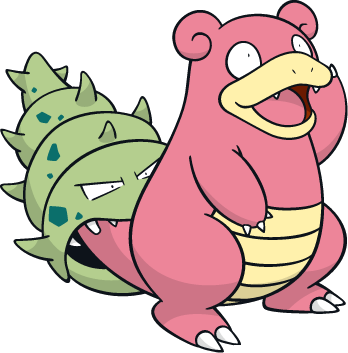 Slowpoke realizes its full potential when it catches the bivalve pokémon, Shellder, who mysteriously transforms into the coiling shell of a gastropod and will never willingly let go of Slowpoke's apparently delicious tail. By gnawing the sea mammal's flesh for the rest of its life, it somehow increases Slowpoke's mental and physical faculties, transforming it into the more powerful, more intelligent, bipedal Slowbro, one half of an outlandish partnership. 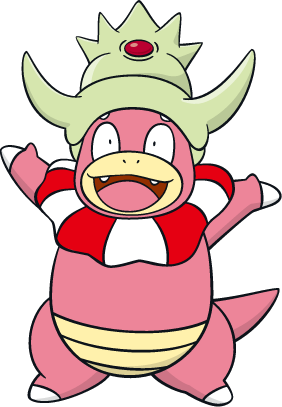 Things got even weirder when the Gold and Silver generation brought us Slowking, an alternative evolution for Slowpoke said to be possessed of vast intellect...as long as the Shellder on its head keeps pumping venom into its brain. Yes, Slowking is nothing more than Slowpoke hopped up on brain-sucking snail juice, even smart enough to speak fluent Japanese in its first animated appearance. The entire Slowpoke family is one of the strangest, silliest things in the pokémon world, though once again, it has a special basis you may have missed. 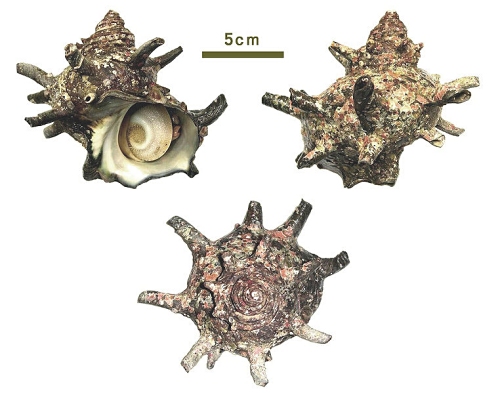 Turbo cornutus ("horned turban") is a large and extremely common gastropod in Japanese waters, where they are known as sazae and popularly eaten raw or cooked. You can already see the similarity to Slowbro's symbiotic pal, but there's still more to this story than a tasty shellfish. 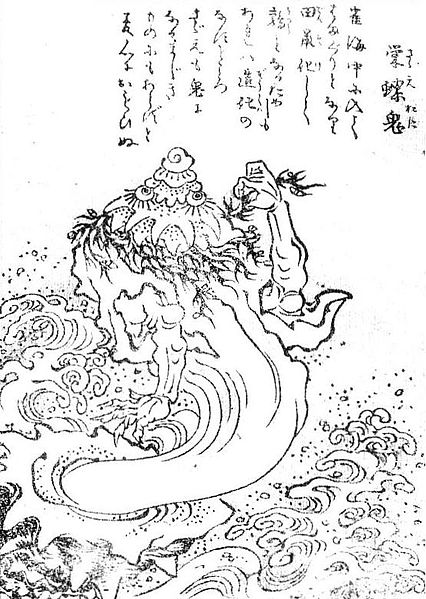 In the 1700's, artist Toriyama Sekien illustrated the "Night Parade of a Hundred demons" and three followup volumes "documenting" youkai monsters both from traditional folklore and his own imagination. Among these fantastic beasts was something he identified only as Sazae-oni, a monstrous being with a huge sazae shell for a head and a second for a lower body.

This "turban shell ogre" has since been reinterpreted countless times in Japanese culture, making numerous appearances in manga, anime, sentai and video games. Shellmon here, a Digimon, is just one strikingly Slowbro-like example. These mythical roots are all the more reason I don't think of Slowpoke as even having any specific animal basis; It is, if anything, just an aquatic Oni, albeit a humorously nonthreatening one.

I have to say the earliest Sugimori illustrations are still my favorite depictions of both Slowpoke and Slowbro. They just look so much goofier and more demented, I love that lazy eye.

Fortunately, modern Slowpoke remains fairly hilarious; you can tell it's the dumbest of the bunch at just a glance. Slowbro loses a little something by looking very marginally more cognizant, but of course I love that horrible, angry Shellder perpetually chewing on its ass. I'm probably one of the few people who always focused on the Shellder first, rather than seeing it as just an "accessory" to the Slowbro, which may be why I wasn't that impressed with Slowking until I saw it from behind, with Shellder's face scowling back at their trainer. I also like the use of the turban shell as an actual turban for this mystical psychic being. I like how both evolutions seem to reference different aspects of the original Sazaeoni.

The only question that remains - a question fans have pondered since the introduction of Slowking - is what happens to a Slowpoke somehow bitten by a Shellder on both ends.

Perhaps it evolves into a monstrous shellfish with a brainless pearlfish-like Slowpoke parasite. Perhaps it evolves into something no mortal has laid eyes upon with their sanity intact. Perhaps it awakens to such terrible cosmic knowledge that it goes deep into hiding, counting down the days until "they" breach the barrier. Perhaps it achieves an intellectual singularity and ascends to join the Slowverlords who govern time and space itself.

...Or maybe it just succumbs to venom overdose, cursing the polypous, lurching shadows it alone can perceive as it dies foaming at the mouth in a gutter.