With roughly six hundred and fifty of them running around, Pokémon cater to just about every taste imaginable, but truth be told, they cater to mine in only small doses. Sure, I find virtually all of them interesting to some extent, but it took Gamefreak's creative team a whopping fifteen years, nineteen core games and five hundred sixty eight creatures to finally bring me that single, positively perfect Pokemon line of my dreams: 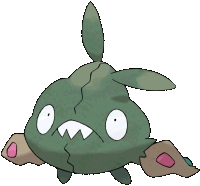 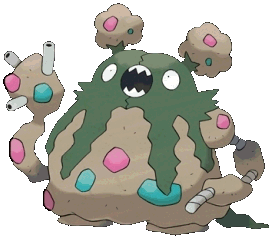 Made entirely of living, sentient garbage brought to life by toxic waste, Trubbish and its evolution Garbodor hit on every single thing that could possibly appeal to me the most in a cartoon monster. Their vacant bug-eyes, serrated teeth and amorphous, rotten bodies are at once bizarrely ghoulish and charmingly pathetic, the same set of characteristics I've strived to perfect in my own monster designs. They simultaneously remind me of many other personal favorites - a little Hedorah, a little Raremon, even a dash of Rat Fink - and are definitely the first thing I'd ask for if pocket monsters actually existed.

I guess what I'm trying to express here, if it's still not clear enough, is that I approve of garbage pokémon...so how does the rest of the fandom feel? 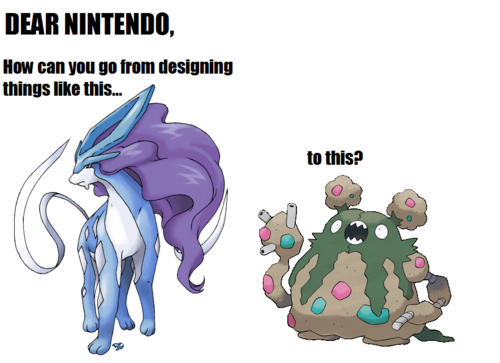 ...Like this, apparently. Yes, from their 2010 debut to this day, Pokénerds with dead imaginations and inflated senses of entitlement have regarded Trubbish and Garbodor as a foul stain on the purity of their beloved franchise; evidence that Gamefreak is either desperate for ideas or just doesn't care anymore. With hundreds other creatures they could choose from, select fans still froth in an impotent rage that one of them would dare deviate from their rigid set of preferences, taking up precious space that could have been reserved for yet another anthropomorphic fox or metal-plated dragon.

What a bunch of losers, am I right? Some people just have nothing better to do than push their thoughts on imaginary creatures upon whatever poor saps have nothing better to do than read them! Now, allow me to break down in a pertinent multi-paragraph essay exactly why Grabadauruses are super great and everyone is suffering from bad, wrong opinlionings:

Monsters made of living garbage, mind you, are certainly nothing new. They've reared their rancid heads in cartoons, video games, horror movies, ad campaigns, kaiju flicks and tokusatsu series since before "environmental" was even a household word. Such grisly amalgamations of waste given life always make for a striking and even poignant image, so why wouldn't and why shouldn't Pokemon put its own light hearted spin on such an enduring theme? The idea that man-made objects might spring to life as unnatural monsters even dates back centuries in Japanese folklore, where such beings are known as Tsukumogami, seeking vengeance on mankind for discarding and disrespecting them. Admittedly, Garbodor's design does appear to have some roots in one particular famous character, the titular star of Hayao Miyazaki's beloved My Neighbor Totoro. Garbodor's overall proportions, face and pattern are all subtly reminiscent of Totoro's, and a memorable moment from the film is even recreated shot-for-shot in the Pokémon television show. Living in harmony with nature, Totoro is described by Miyazaki himself as a "nature spirit," which would make Garbodor a sort of affectionate parody; an anti-Totoro. 
Even while drawing from an established monster template and lampooning a classic icon, however, the trash pokémon are immediately recognizable as original characters; even in profile, there's simply no mistaking Trubbish and Garbodor for anything other than Trubbish and Garbodor. They don't look even slightly like any other pokémon, nor could you confuse them for any generic drawing of a trash heap. This instant identification is the most fundamental measure of a technically effective character design, one of the first things a professional artist takes into consideration. They may be simplistic concepts on paper and even rather simple in their execution, but clearly demonstrate a thoughtful eye for the iconic. At the very least, the walking landfills finish something Muk and Weezing started over a decade prior. Introduced with the first 151 'mons, the gooey, amoebic Muk is a living mass of chemical sludge, born from filthy water and frequently found dwelling in sewers. Weezing, on the other hand, is a floating bag of sickening fumes created wherever toxic gases are spewed into the atmosphere. For more than fifteen years we had a liquid pokemon made of water pollution and a gaseous pokemon made of air pollution; wasn't something missing? Something neither liquid nor gas? Neither aquatic nor aerial? Only with Garbodor does the triad come together. At long last, we have freaky pocket monsters of sea, sky, and land pollutants.

If there's any possible criticism I can come up with, I suppose these creatures could have benefited from slightly more recognizable "trash" in their designs. I understand the stylistic simplification, but at the very least, a single fish skeleton - a universal cartoon symbol of stinky garbage - would make their concepts unmistakable at a quick glance. On the other hand, I suppose the same volatile chemicals giving them sentience could continuously break down organic and semi-organic contents into the homogenous brown crud we're seeing here, a process by which they may synthesize more life-giving toxins in an endless cycle; even more polymers to maintain their plastic tunics. Amazingly enough, such a creature isn't all that far removed from reality; deep in the abyssal depths of the sea lie actual, living "garbage" beings known to science as Xenophyophores. Actually the largest single-celled amoebae ever documented, these organisms consist of little more than branching, threadlike strands of slime held together in a massive clump of their own hardened excrement, sand grains, scraps of seashell and any other useless, inedible material they can collect. Pokeyfans frequently gripe that a "living blob of garbage" is simply too absurd, too unbelievable to be a pocket monster, while actual, literal blobs of living garbage are a thing that exists, right now, on our very own Earth. Stick that in your pipe and smoke it. 
Whatever the logic behind them, what truly endears me to these pokémon is just that perfect balance of the adorable and the wretched I touched upon earlier. Roly-poly little Trubbish is literally rotten to the core, a roiling stew of refuse in a plastic skin with slimy pseudopods of pure filth and what are probably shards of broken glass for teeth. As it engulfs and assimilates whatever nonliving matter it happens across - tin cans, putrid meat, medical waste, possibly the dismembered remains of serial murder victims - it finally ruptures as it morphs into Garbodor, a lurching golem of malodorous offal with scrap-metal bones and a tattered mask of what was once its body. It's a grotesque, toxic parody of life, but it's not a bad guy, and it's even kind of adorable. All it wants is to go on eating garbage, being stinky and pissing off fanboys. 
Yes, there are official Pokémon characters based on garbage. They were deliberately conceptualized, finalized and forever approved while the dark/psychic wolves and dragon/steel velociraptors of your dreams are rotting in the art department's reject pile. Go ahead... soak your Gardevoir body pillow in your anguished tears.