Wow, what?! About damn time Farfetch'd got any fresh attention! This duck is a little tougher and more hardened than regular Farfetch'd, armed with a MUCH larger, heavier onion and a look on its face like it's gotten very, very tired of defending itself from hungry humans and other predators.

It's not OUR fault ducks are the most mouth-wateringly flavorful and juicy of all poultry, layers of meltingly silken fat sandwiched between delicately crispy skin and lightly oily, perfectly umami muscle when it's roasted just long enough, and it's good enough without leek. Add the leek in there and your mouth will think it ascended to some higher plane of existence.

Unlike its Kantonian cousin, this Pengly finally evolves, but only after it has landed three critical hits in the same battle. Interesting twist! I also really like that very little has changed other than the massive size of its onion. 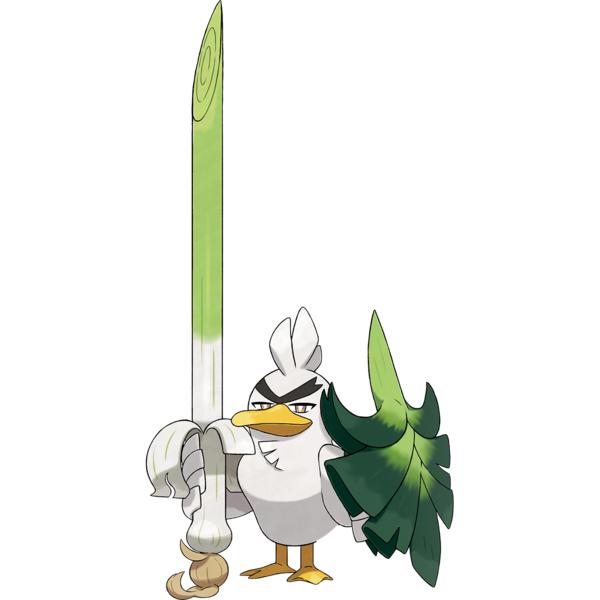 Unfortunately..."Sirfetch'd" is nowhere near as cool or distinct to me as the scrapped Madame, and I think this is now TOO MUCH onion in the mix, probably overwhelmingly all the subtlety of Sirfetch'd's succulent flesh.

It's just Farfetch'd with a sword, a shield, and the smug confidence of that bad guy prince from Shrek 2. I've seen so many speculative Fetch'd evolutions over the years with so many great designs and motifs, it's kind of sad that what we finally received does relatively little with its base form at all.

If Farfetch'd was always your very favorite Pokemon, maybe you're glad it finally evolves, and maybe you even love it FOR the conceited chivalrous knight persona I glean from it, but if you had a specific, sentimental Farfetch'd you'd been trading over since older games, you can never even evolve it into this because it can only evolve from the Galarian version, and you can't change a Pokemon's region, so I guess we just hit on the downside to the Regional Evolution concept.