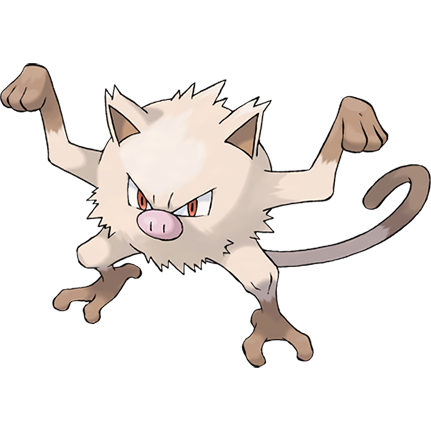 Mankey has the honor of being our very, very first fighting-type pokemon to review! It never really occured to me to think about before doing these reviews, but the first numerical representative of each type was kind of designed to be exemplary of it, wasn't it? Rattata was our first normal, Sandshrew our first ground, Ekans our first poison. These firsts are all about as basic as their respective types get, and Mankey is no exception. It's pretty much just a hairy ball with a pig face and monkey appendages, which doesn't do much to visually communicate the fighting type, except that monkeys in Japan are generally associated with martial arts. 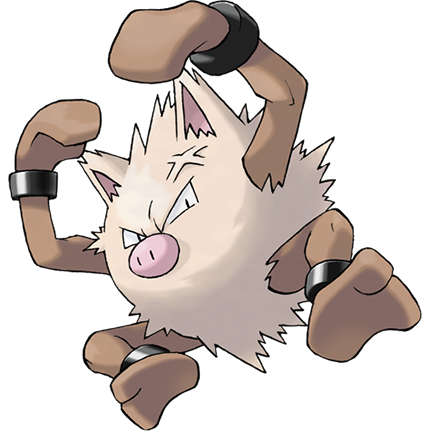 Mankey is also another one that barely changes at all when it evolves. In fact, it just gets angrier, acquires metallic-looking bands on its now hairless limbs, and completely loses its tail, which might be why it's so pissed off to begin with.

Fighting is kind of a more "abstract" type in pokemon. Nothing really chemically or biologically differentiates it from a normal type like, say, grass or electric, but it has interesting offensive and defensive properties regardless. It's strong against dark, ice, rock, steel, and normal type, making it one of the few "elements" with any non-neutral effect on normal, but it's not very good against psychic, poison, flying, fairy or bug, while fairy, psychic and flying do double damage to a poor little Mankey, and fighting moves can't touch ghost types at all.

This all starts to make sense when you think of the fighting type as basically a "hero" type, which is more or less how it's presented in Japan. Fighting-type pokemon aren't just physically strong, but ultra-disciplined, what Dungeons and Dragons would categorize as "lawful." This is why they're rivals of the "dark" type, which we'll talk more about when we hit generation II!

The pig-monkeys aren't the most imaginative or memorable pokemon out there, but they're enjoyable enough introductions to the fighting type.