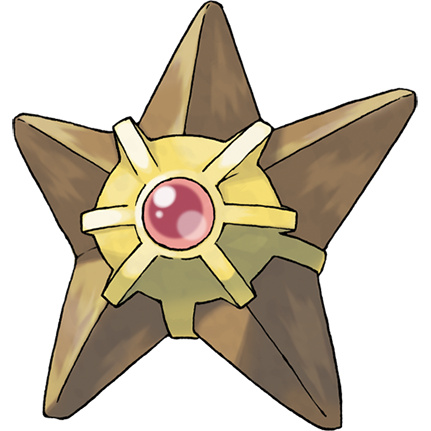 We've been looking at a lot of the first generation's long-time underdogs, but it's hard to overlook this strange starfish pokemon, an angular and artificial-looking creature with no obvious facial features other than a red "gem" of ambiguous purpose. Most of us can't help reading that as an "eye," but it's only ever referred to as a "core."

It was always interesting how the anime characterized Staryu as basically a ninja, whirling around like a giant shurikan and frequently just shouting "HAAAAAAH!" instead of its full name. The amount of personality given to this totally inhuman thing was pretty fun to watch. 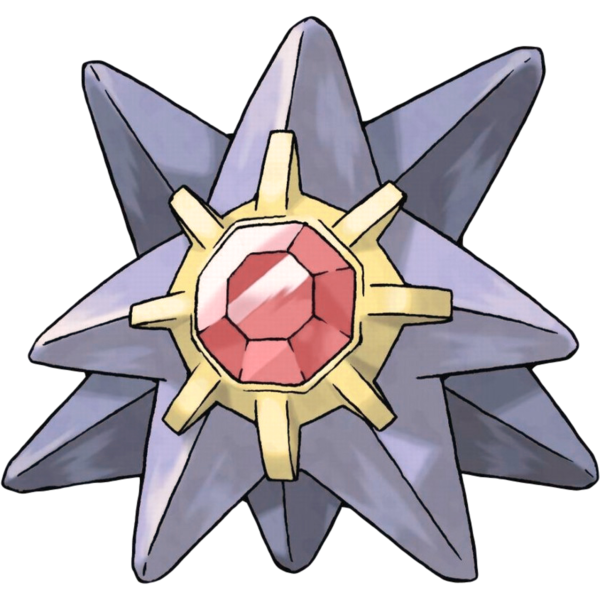 Once it evolves into Starmie, Staryu becomes two five-pointed stars sort of sandwiched together, seemingly able to spin independently of one another. The gem also gets a lot larger, and according to the dex, it now "sends strange signals into space."

Are these things really even echinoderms, or are they totally alien pokemon that just happen to be star-shaped and live in the sea? I guess you can sort of say that about any pokemon, but you get what I mean, right? It always fascinated me how unnatural these guys looked, which stood out a little more in the first generation than it does today.

Still, I'd really like to see at least one more starfish pokemon some day; a more biological one for those who truly appreciate the spiny, alien charms of the echinodermata.

Fascinatingly inorganic water types, and I guess the only non-Zubat pokemon who MIGHT be eyeless.