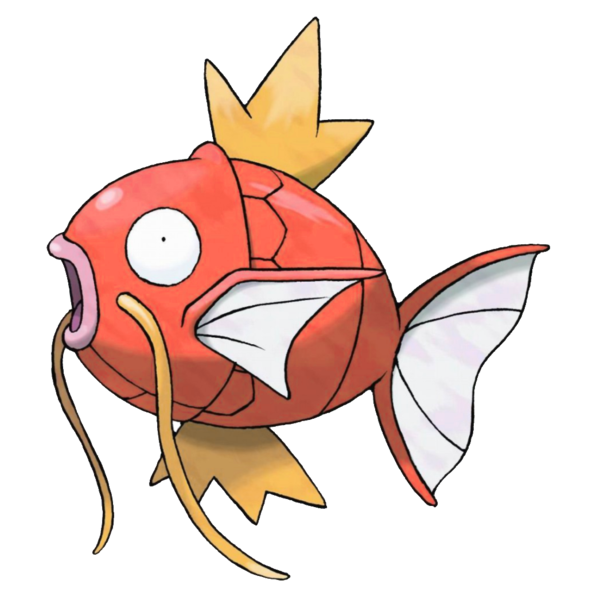 One of the famous of all pokemon lines, Magikarp basically exists to show off how extreme and surprising a pokemon evolution can get. The poor little fish is hilariously pathetic, often shown flopping around helplessly and said to be terrible even at actually swimming. Its signature move, splash, does zero damage, and it only learns two other, fairly underwhelming moves in its entire lifespan, tackle and flail.

Magikarp is also an extremely common pokemon to find by fishing, though an NPC in the original games famously attempts to sell you one for an exorbitant price before you'll encounter any in the wild.

For all those who played pokemon Red, Green, Blue or Yellow totally "blind," before everyone and their grandma knew Magikarp's secret, it must have seemed like little more than a joke...but perhaps the curiosity to see what it learns and how, or if, it evolves was still strong enough for a few players to keep on training this sad, ridiculous carp. 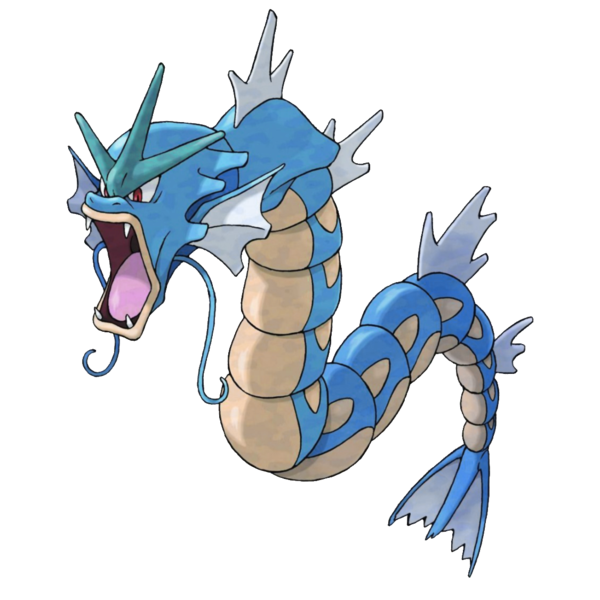 Those players were finally rewarded when Magikarp hit level 20, evolving into the huge, terrifying and incredibly powerful Gyarados, referred to by the pokedex as the "atrocious" pokemon and said to devastate entire cities when it gets pissed off enough, and it's always pretty pissed. This is understandable, since your average Gyarados just got out of an awkward childhood as the most neglected, mocked, abused and unwanted pokemon in the sea.

To someone not already spoiled to death on pokemon, Gyarados must have been an amazing surprise. The formula of a weak, pitiful little creature spontaneously evolving into a destructive nightmare has been repeated several times since, but still never to the extreme as these two.

Gyarados is also another of those pokemon that look like dragons, learn dragon moves and are trained by dragon-themed characters, but aren't actually of the dragon type, which was meant to be a lot more exclusive in the first generation. Instead, Gyarados is a water/flying type, which makes a lot of sense for a creature modeled after a Chinese dragon, which are also said, in some tales, to take the form of harmless carp or goldfish. 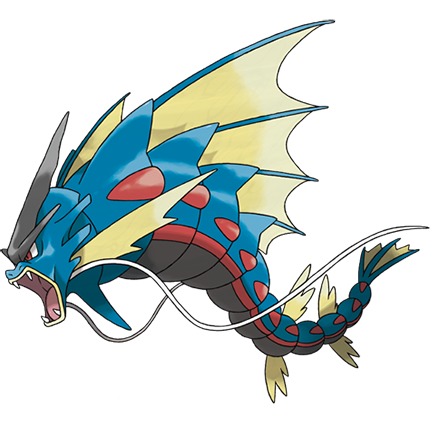 You might expect Gyarados to earn true dragon typing for its mega evolution, as was the case for Charizard, but I'm glad it wasn't. Instead of a predictable water/dragon typing, Mega Gyarados is water/dark. Does this make it the first dark type I've reviewed? Normally I'd launch into the ins and outs of the type here, but I think I wanna save that for the first Gold/Silver dark pokemon.

For a Mega, I actually really love this one's design a bit more than most. It exaggerates some features of Gyarados, adds a gigantic Magikarp-like fin and a bulkier body I find more aesthetically pleasing. It also looks just as "natural" and organic as vanilla Gyarados, instead of adding angular, plasticy doo-dads like so many other Megas. All in all, an excellent rampaging windsock.