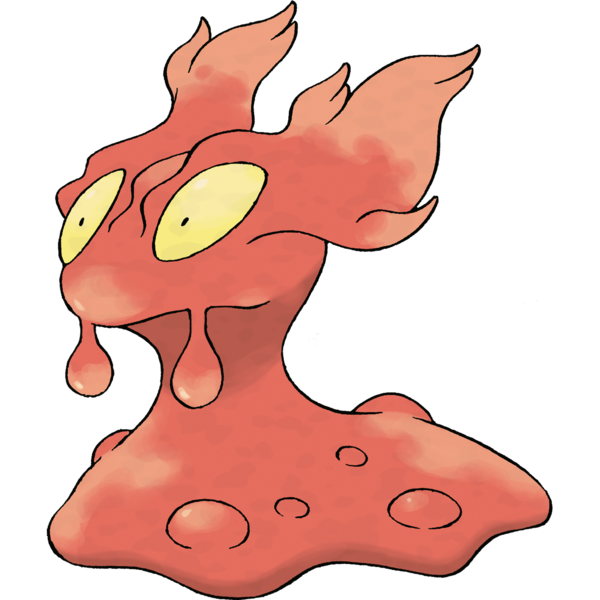 Before the second generation - before anybody even knew there'd be more generations - a gastropod was one of my most-wanted pokemon concepts, and I couldn't have been happier with Slugma's execution. How wild is it that the first pokemon slug is a fire/rock type made of lava? That's just SO pokemon, isn't it? That's the kind of thing we're all here for. Wacky, unexpected elemental animals.

Slugma's design is nice and simple, just a pile of molten rock with cool looking bubbles and dribbles and staring, yellow eyes to contrast its uniform red-orange. If I have just one critique, it's just that those lovely eyes have kept moving further and further down its face over the years. Look how cute they were in its earliest sprite, way up in its flame-like eyestalks! 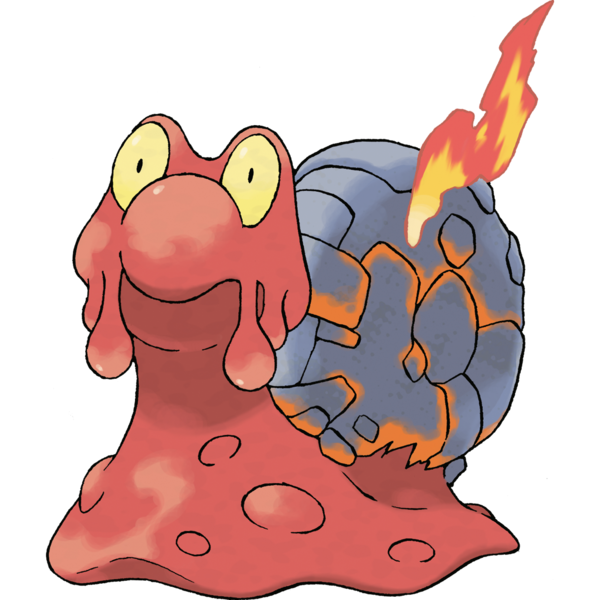 Slugma's evolution into Magcargo is another of those things with such a perfect, classic pocket monsters feel to it. As it grows larger, some of Slugma's lava begins to cool down, and slowly forms a shell out of hardened rock. That's genius. It's such a cool looking shell, to boot, subtly coiled like an actual snail but made up of rugged chunks a bit more disorderly and natural looking than you get in most other pokemon designs. Magcargo's always seen with a bit of flame spurting out of the shell's cracked surface, too, which is a nice little touch.

Unfortunately, the fire/rock combination makes these lovable blobs almost unusably vulnerable to widely common water and ground moves, and Magcargo would need one heck of an evolution or mega form to compensate. The 100 base stats added by a mega could never be enough, unless it also changed typing, and the only one that could honestly make any sense while mitigating its weaknesses would be fire/steel.

At least these two still see some use for their "flame body" ability, which functions outside battle to make pokemon eggs hatch sooner. Many other fire types can have this trait, but Slugma has been one of the most accessible in certain games, and there are probably thousands of pokemon in circulation who were brought into this world by the lava slug. Are you gonna tell a Garchomp to its face that its nanny is a bottom tier pokemon?

If I could get away with it, I'd use Magcargo in every single team.