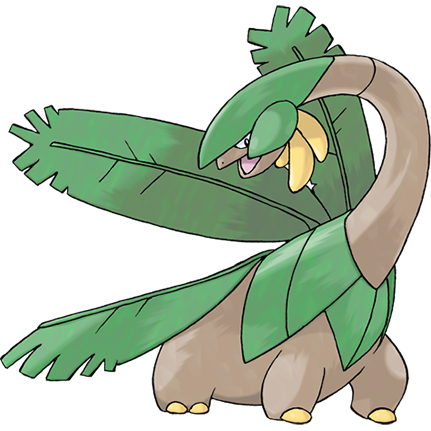 Today's pokemon is so absurd, the human brain can have difficulty processing its absurditude until it's conveniently spelled out, which is all I did the first time I ever talked about Tropius, and somehow it became one of my most viral all-time blog posts:

A lot of people, apparently, just never paused on Tropius long enough to grasp the sheer magnitude of ridiculous it has to offer.

A dinosaur that's also a banana tree isn't an unusual idea for a pokemon. It's a pretty natural fit, really. An herbivorous long-necked sauropod plus a fruiting plant. Typical grass type.

A sauropod with wings slapped on it isn't that weird either. That's kinda what your typical dragon design is, isn't it?

Even a banana tree that can fly would not be that unusual for this series. I could easily see one that works like a big helicopter or even flies in a dragonfly-like configuration, right?

It's only when you combine all three of these otherwise conventional monster elements that you get something exceptionally goofy. The closest thing I can think of in any other pokemon is the fifth generation's Krookodile, an alligator with a bandit motif that lives in sand, but even those three themes feel like they play more obviously into one another.

-A moose made of ice that can burrow.
-An octopus clown cactus.
-A tortoise that's also a dump truck made out of water.
-A wooden platypus cowboy.
-A ghost horse that's also a boat.
-A floating psychic hippopotamus filled with bees.

The possibilities are endless. You teach us so much, Tropius.

Just plain cool at first glance, hilarious on further scrutiny. If only even more pokemon took just one step farther into preposterousness.