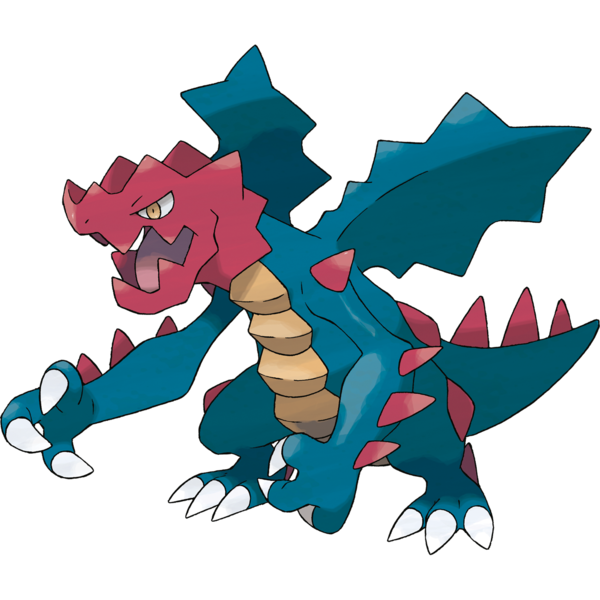 Poor Druddigon. This pure dragon type isn't especially powerful, has no particularly unique properties, doesn't evolve into or from anything else and might be the least popular, most overlooked dragon in the whole series. I've even seen it referenced as one of those "ugly" designs that supposedly make Black and White one of the "worst" generations. If you ask me, though, Druddigon was easily the MOST charming dragon type up to this point. I just love what a spiky, scaly, classically draconic reptile we're seeing here, I love its frighteningly long arms, I love its blunt iguana-like head, I even love those jagged wings a lot of people find irksome.

I've actually seen a lot of people complain that Druddigon's wings don't look functional, but as a matter of fact, Druddigon doesn't fly at all. It doesn't learn "fly" like any other winged dragon type, it's never officially been shown flying and its pokedex only mentions it "racing through tunnels." Druddigon's wings do serve it a purpose, however, supposedly used to help it "absorb sunlight" to heat up its body, the same function once proposed for the enormous sails of Dimetrodon and other prehistoric creatures. This is especially important for Druddigon, because it's said to stiffen up like a statue when it cools down at night, or rather like a gargoyle, which was always the first thing its design brought to my mind. As I mentioned a few years ago in my "pokeween" review of Druddigon, another thing it reminds me of is a marine iguana, males of which even get a scattering of red during mating season. I really feel like Druddigon is the best "face" of the dragon type. It's just so darn dragony, in such a classical way. It's not so much the regal, gleaming god-beast dragon of modern fantasy (yawwwwn) but closer to those nasty little maiden-eating abominations common to older artwork.