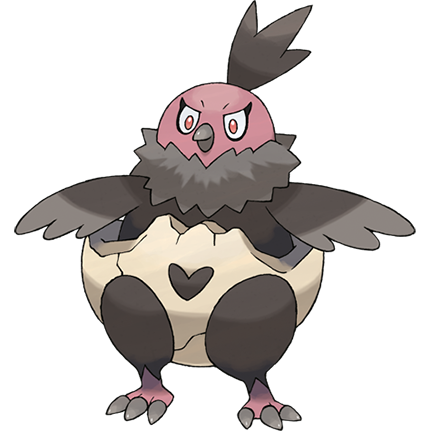 So at long, long last, we have us a carrion bird pokemon, appropriately flying/dark type. Who doesn't love themselves a good carrion bird?? I mean, some people like to include crows in that equation, and we do have Murkrow and Honchkrow, but personally I don't think you've truly earned such a coveted title until you've got that naked or mostly-naked head that evolves especially for wolfing down wet, sticky entrails. Now that's a bird!

I'm glad that our first vulturine pokemon really revels in everything that makes these creatures cool, showing off its scavenging nature by actually wearing a hollowed-out skull! I love the clever way this invokes both an egg the bird is hatching from and a horrible, horrible diaper. Take a moment to appreciate the facial expression on this nasty bird. That is exactly the face of something that's going to defecate into your severed head. 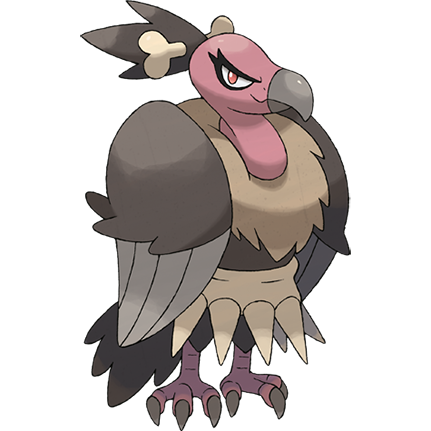 The evolved form, Mandibuzz, keeps the beautifully subdued color scheme and black eyeliner of Vullaby while upgrading from a skull diaper to a fanged jawbone "skirt" and a prehistoric-style hair bone. It's more or less everything I could have wanted a dark/flying vulture to be, embellishing on the real animal in fun, thematic ways. The only thing a tad "off" is that name, a combination of Mandible and Buzzard that comes out sounding exactly like it should have been the name of a bug type. 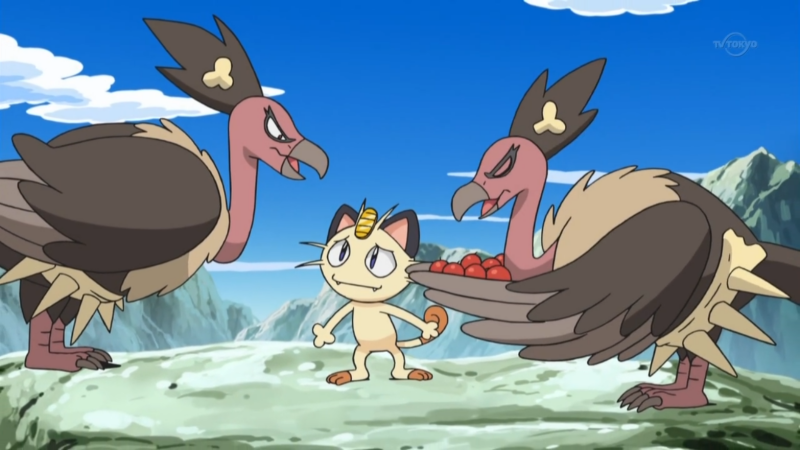 The one other peculiarity of this pokemon, as I hinted at when we reviewed Braviary, is that Vullaby and Mandibuzz are exclusively female, just as the bald eagle is entirely male. I have honestly no idea why they made this decision. Version counterparts are never normally gender counterparts, and it isn't even a Nidoking-Nidoqueen scenario where the two are different sexes of the same monster, either; there's no mention of Braviary in any of Mandibuzz's flavor text or vice-versa.

I'm not complaining, of course. There's nothing wrong with a whole species of scuzzy buzzard moms, it's just that it comes kind of out of nowhere. It's at least acknowledged in their latest Sun/Moon pokedex entries, which state that Mandibuzz dress up in bones to "attract males," but no males have ever been found. I guess the implication is that male Mandibuzz went extinct, like the male Whiptail lizard.