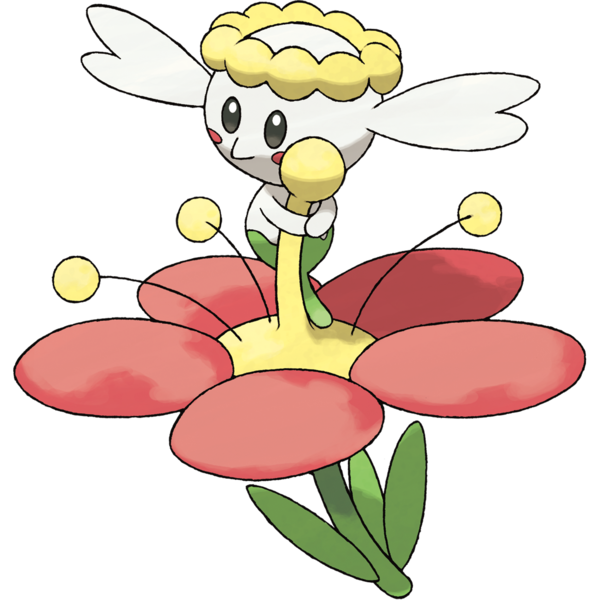 This was the generation that introduced Fairies, the first new type since Dark and Steel were introduced by the second generation, and Flabebe here is the first new fairy type pokemon in the pokedex. Together with its appearance fairly early in the game and its three full evolutionary stages, it's clear that this is meant to be basically the "debut" fairy line, the very face of the typing...and I guess it serves that purpose well enough, a tiny, elfish creature clinging to a flower.

Since it carries a flower with it for life, Flabebe learns a lot of grass attacks, but it isn't a grass type because its true body isn't plant based. 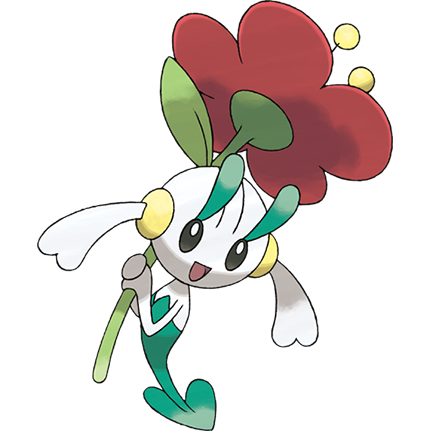 Floette is a predictable evolution for Flabebe, pretty much just gaining a few more doo-dads and now carrying the flower more like a little parasol. Kind of forgettable, honestly. 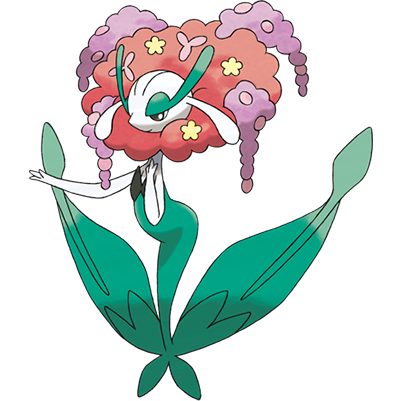 When Floette is exposed to the shiny stone, a pretty weird thing happens. No longer holding a flower at all, its own body appears to have taken on botanical properties, almost mermaid-like with a "tail" of leaves and "hair" of petals. So did Floette fuse with its flower?

That would certainly seem the case, aesthetically, but Florges remains entirely fairy-type. Why not fairy/grass? It's odd, but at least kind of interesting that this obviously plant-like and plant-themed monster doesn't get a grass typing at all. Instead, it's a fairy that works with plant life, rather than truly being a plant.

It's also not a very bad design. I like the plant-mermaid aspect, whether or not it's intentional. 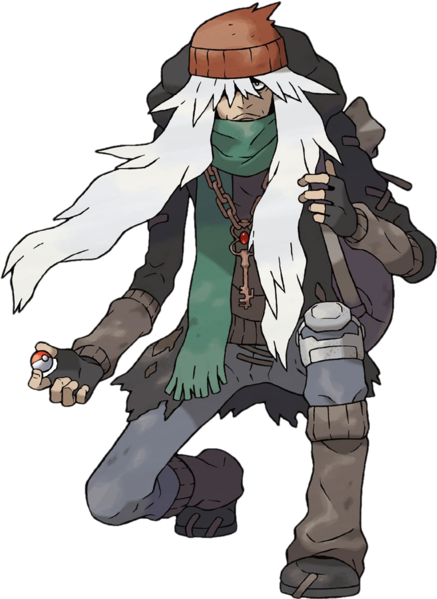 Anyway, I suppose commenters are right that I should add something about this line's plot significance, actually one of the weirdest and darkest storylines we've seen in the core games - throughout X and Y, the Evil Team of the Week seeks to exterminate all other human life through the power of an ancient superweapon, the key to which is carried by a mysterious, giant man named AZ.

What we learn, mostly through text, is that AZ is over 3,000 years old and originally created the weapon to bring his beloved, dead Floette back to life through the sacrifice of innumerable other pokemon, both of them cursed with eternal life but continuing to age.

It's pretty messed up, but the most messed up part is probably that Floette died being drafted into a war and was returned to AZ in, quote, "a tiny box."

Whose job is it to hand people their dead pokemon in adorable, tiny coffins?! 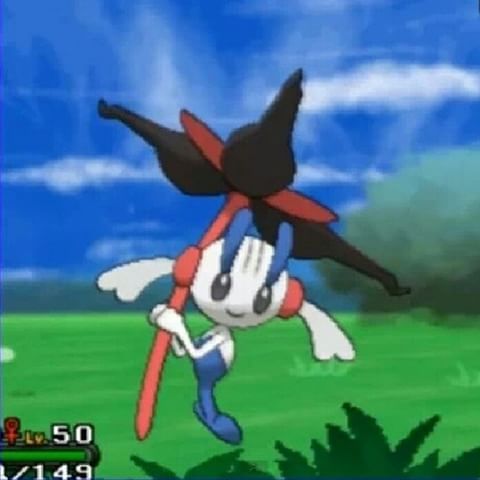 So, what's interesting about all this, besides the uncharacteristically grim tale players are kinda forced to process at the last minute, is that AZ's special, immortal Floette was actually programmed into the game. It can't evolve into a Florges, but has an equivalent stat total, a unique color scheme, and even its own signature move, "Light of Ruin."

To this day, "Eternal Flower Floette" has never been released, and as we've already moved on to new settings, new characters and new stories, its release has probably been cancelled altogether.

Not bad a design, not too exceptional, a decent introductory fairy and an odd choice for a grimdark backstory.