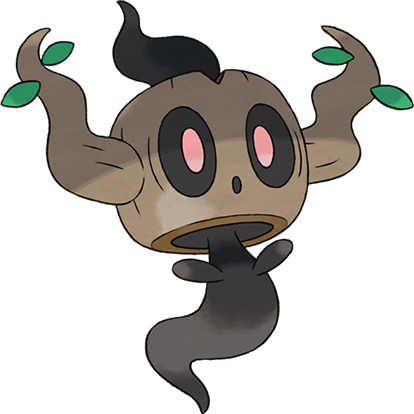 Tell me you're not ready to just BARF at how criminally cute this thing is, the very first grass/ghost in the franchise! Look at that! Look at it's teeny-weeny little dot of a ghost mouth offering the most innocent little ghostly "oooooo" you ever did imagine. To me, there's a strong Miyazaki vibe to this shadowy woodland spookter.

people most remember Phantump for is its mercilessly morbid pokedex entry. It's not only a human ghost, like Yamask, but specified to be the ghost of a human child who wandered off into a forest and died there. This is someone else's long-missing son or daughter you're imprisoning in a pokeball.

...And things only take a turn for the grimmer when that dead shadow child evolves. 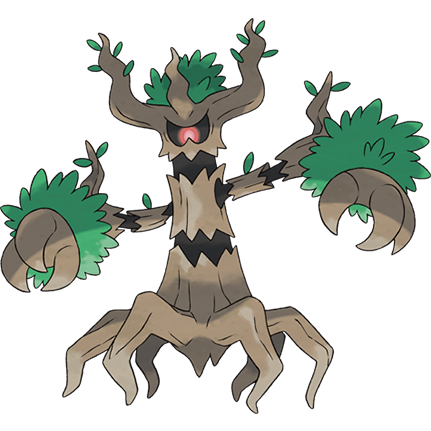 Now at one with the very forest that consumed it, the lemure occupies an old, rotten tree for a corporeal body, crawling on its bent roots like a ring of insect legs, singular eye glaring from branches like twisted demon horns. It is now said to communicate across a vast root network, control trees like puppets and get people lost in the forest should they disrespect or harm the local flora and fauna, a merciless and bitter guardian of nature whose activities may only create more Phantump.

This is even illustrated by Trevenant's unique signature move, "Forest's Curse," which actually transforms the opponent pokemon into a grass type. That's so cool and fun that it's a criminal shame almost nobody finds use for it in competitive play, though that in turn is only because Trevenant has a lot of other, more versatile strategic options to consider first. 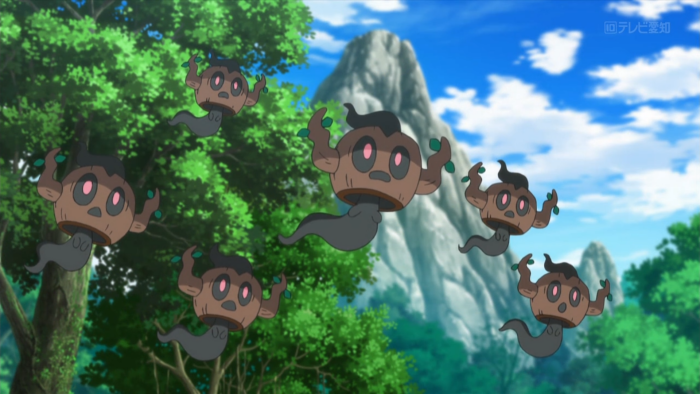 Admittedly, I'm STILL more partial to the heartwrenching eeriness of Phantump - almost wishing it wer a standalone fairy/grass, or something - or that Trevenant retained a similar pair of staring owl-like eyes, if not on its head, then perhaps on one of its other trunk segments. That aside, Trevenant brings quite the arsenal of coolness factors to our little monster game. 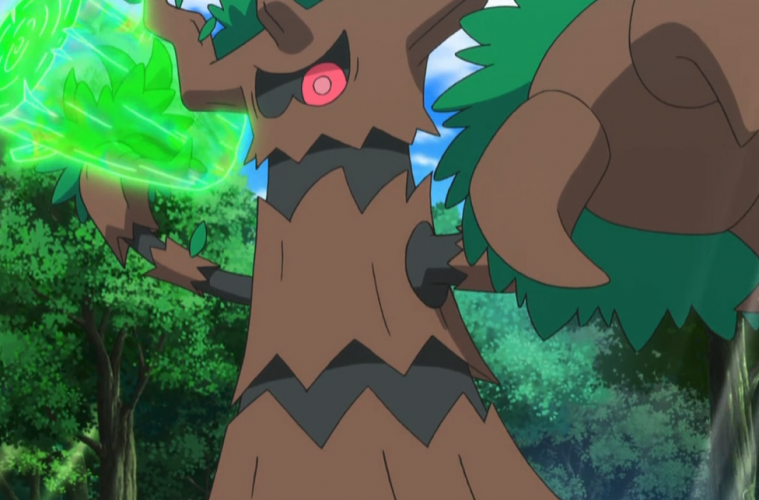 Together with Exeggutor and Abomasnow, we finally have a grass pokemon for each of the three widely (if not so much scientifically) recognized categories of "tree" or very tree-like plant, each carrying a very folkloric vibe and boasting a different, novel type combination.

I'm glad our first straight-up deciduous tree pokemon also wound up being our first ghostly botanimorph as well. Haunted trees are both a staple Halloween specter and fantasy gaming monster that seldom see a lot of direct appreciation, but they always look cool as heck. Trevenant is in general one of the more menacing looking Pokemon out there, especially fun considering it occupies a role more commonly given to conventionally attractive wood nymphs and forest elves.

It's also surprisingly uncommon that I ever see a creepy cyclops tree, and it's the same Zaku inspired eye I loved so much from the Duskull line in a final evolution I find vastly more appealing than Dusknoir.

Finally, we once more have a Pokemon with a shiny form I like even more than its default palette. Shiny Phantump and Trevenant not only have thematically appropriate, red-tinted autumn leaves, but the kind of ghostly pale bark that comes natural to some trees - such as white aspen - or dead trees, stripped of bark by disease or a lightning strike.