Pumpkaboo and Gourgeist and I NEED A MINUTE. 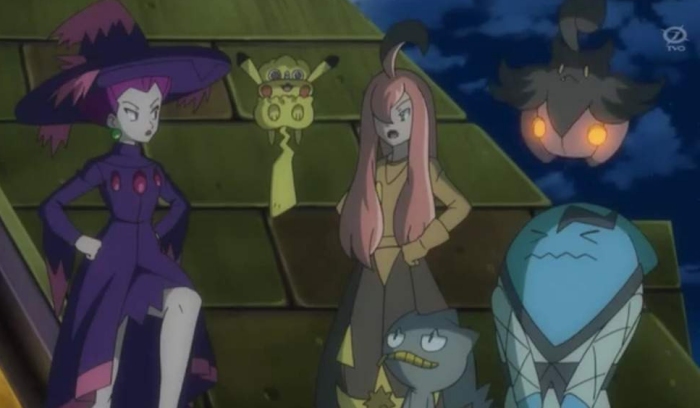 ...For as long as pokemon has existed, people (me) have asked where the hell its Halloween spirit has been hiding. Halloween's popularity in Japanese culture has rivaled its popularity in America since before Pokemon even existed, and Jack O' Lantern critters have prominently populated such fellow monster titles as Digimon, Yu-Gi-Oh, Megami Tensei, Dragon Quest, even the forgotten Monster Rancher and Robopon.

...But I guess Gamefreak really isn't one to rush a creature concept just because it's an obvious one, are they? It took them almost twenty years to give us a gourd-based grass type of any sort, but I'm glad that happened in the same generation that dropped in time for October 2013. Was that truly just coincidence? 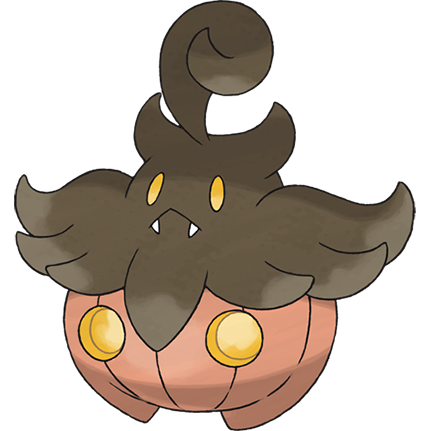 For our long, long awaited spooky squash, Pumpkaboo couldn't possibly be better. It's another grass-ghost type, serving as an appropriate counterpart to yesterday's haunted tree, and it even has a similar signature move, but while the trees can use "forest's curse" to turn other pokemon into grass types, Pumpkaboo can use "TRICK OR TREAT" to turn other pokemon into - what else? Ghost types! FREAKING AWESOME.

Pumpkaboo's design is also totally unexpected. We've all seen an endless parade of monsters with carved pumpkins for faces or heads, but as much as I still love those, it's a lot of fun to see something so different for a change. Here, the pumpkin is only the body, and the "head" is where the stem should be. It looks a lot like an entire, cartoon vampire bat breaking out of the gourd's top, but it's also fluffy and a little cat-like, rolling three of Halloween's major mascots into one body.

As a bonus, Pumpkaboo - and its evolution! - are the first pokemon to actually vary randomly in size, which is even reflected by their stats. You can have everything from a lighter, faster mini-pumpkin to a bigger, slower and better defended megasquash.

From its spooky little kitty frown to the big glowing eye-holes on its pumpkin "pants," this vegetable specter is so immediately iconic that I could accept it as the official Japanese mascot character of Halloween in general. 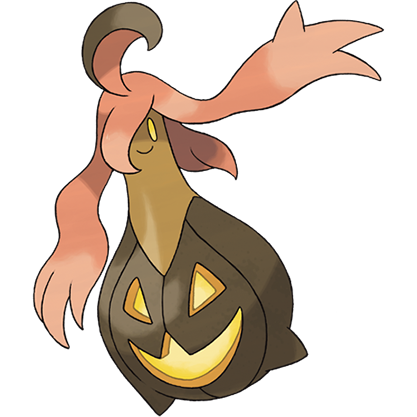 Once more, however, there's almost as much lost in a Pokemon's evolution as was gained. I'm honestly pretty torn about Gourgeist, because I would have loved most for Pumpkaboo to build further on that pumpkin-bat-cat combination, but I can't deny how much I love this Marzipan-looking weirdo on its own merits. To me, it kind of evokes a big, melting candle protruding from the pumpkin, which I think was the intent, though it also reminds me of an oven with a big stovepipe on top - like where an old witch might bake up some plump, juicy people-pies. 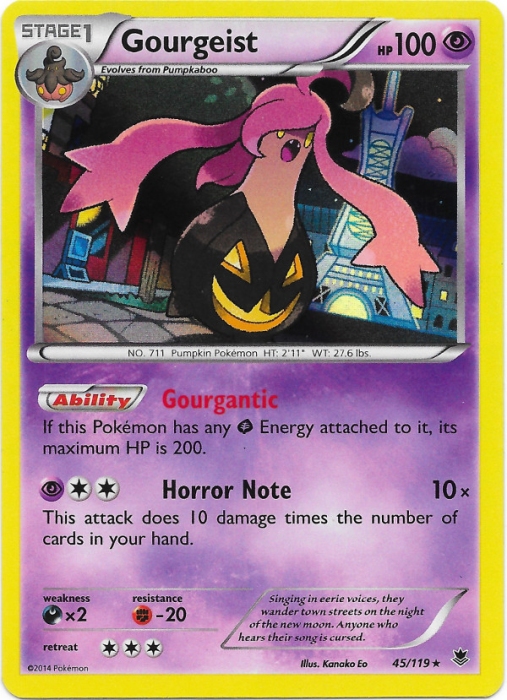 Whatever it's supposed to be, I like it. I like that it still has little fangs - at least when it opens its mouth - and I like that it uses its luxurious pink hair as arms. It's quirky and kooky and fun...

...And, apparently, TERRIFYING. Gourgeist is that delighted by the "suffering" of its "prey?" I thought pokemon were never supposed to be "evil?" That seems PRETTY evil. 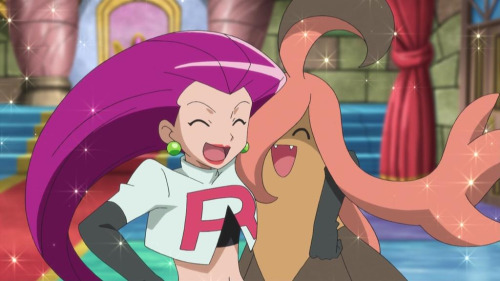 Gourgeist and Pumpkaboo almost don't feel like they were designed as one line, but like they were lifted from artist sketches of the same rough idea and slapped together as evolved forms. It's certainly not as logical a progression as Phantump to Trevenant, and the trees remain somewhat more impressive from an artistic standpoint...but I'm overall glad to have these unusual things as our official Jack O' Lantern monsters, even if they prove to be our last.

I certainly wouldn't mind an alternate evolution for Pumpkaboo, though.