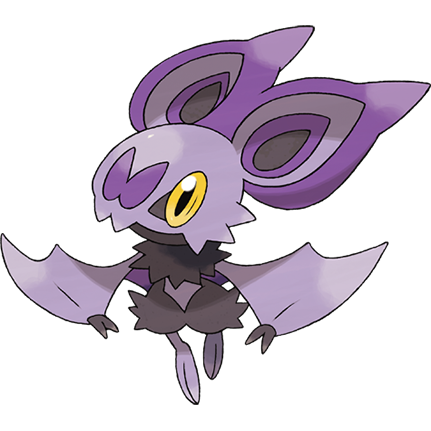 If bats are your favorite animal (and they're certainly a top-tier choice), Pokemon has downright spoiled you by now. You've got a goofy Halloween-decoration vampire bat in the Zubat line, a cutesy, fluffy little fruit bat in the Woobat line, the monstrous and predatory half-scorpion Gligar line, and now a lovely all-purpose quasi-realistic bat monster that happens to be a freaking dragon type. Yeah, this little cutie is flying/dragon. How the hell did dragons get so cool all the sudden!? I never really cared about dragon pokemon before, and now a single generation brings a gooey slug, a toxic seahorse and a Chiropteran to the type.

Noibat's design has basically everything you can want in a bat pokemon. Huge sonar-dish ears, a weirdly shaped nosed, spooky-cute eyes and a gothic black and purple color scheme. I even love the fur sticking down over the mouth, that's adorable...or are those just stylized un-colored teeth? 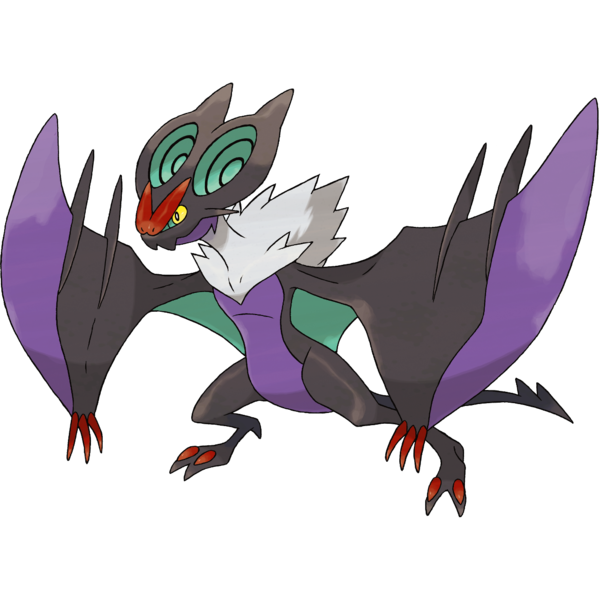 Noibat undergoes the expected drop in cuteness when it evolves into Noivern, but everything just plain cool about it is amplified, and the design more appropriately reflects that this is both a bat and a "dragon." The aquamarine elements feel like a tad much, but otherwise, it's a very solid, fun design for a big, scary-cute fledermaus which may or may not arguably represent a flying fox, if you like to get that specific.

...Which reminds me, unfortunately, of all the damn flame wars I witnessed when this pokemon was first revealed. Flame wars over whether or not it was appropriate to actually even call it a bat and not "a wyvern" that just happened to have a somewhat bat-like motif. If you think that sounds like an asinine and pedantic thing for people to argue about, then you are correct.

The batliest bat that ever batted it up with all the bats.