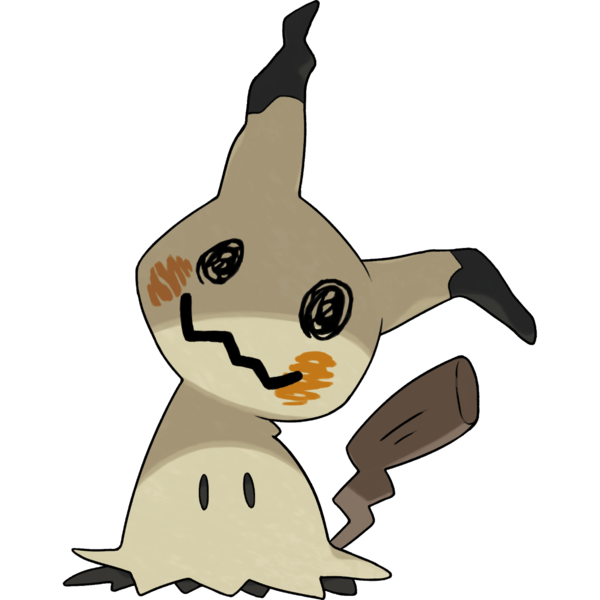 Here it is, everybody; the pure, perfect cupcake the entire fandom fell in love with the very split second they laid eyes upon it in the pages of Corocoro magazine. From the name and design alone, we can see that this is some unseen creature roughly imitating a Pikachu, and that lopsided, scribbled-on face would be endearing enough whatever Mimikyu's typing, personality or backstory, but it's obvious from its richly detailed characterization that it must have been a favorite of the creative team themselves. They knew they had pure gold on their hands. 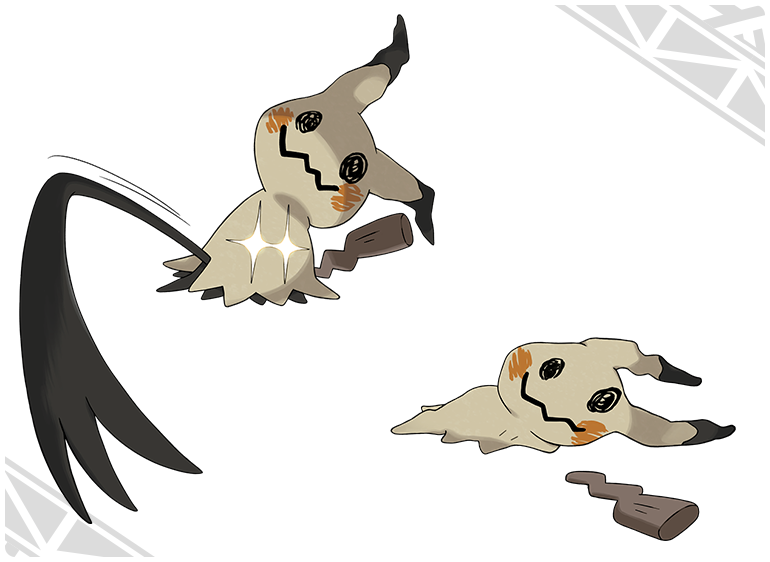 Mimikyu is our first-ever ghost/fairy pokemon, and just the sort of whimsical boggart best suited to such a distinguished status. You'll first notice that those dots on its "body" are its actual eyes, its true shape not even slightly like that of a Pikachu or any vertebrate animal. We catch little glimpses of a black, amorphous mass and shadowy, elastic limbs, but its true naked appearance is said to be incomprehensibly horrific - to the point that anyone who sees it can actually "fall ill" or even "die from shock."

A creature too grotesque, too alien to even safely gaze upon is a classic if somewhat tired horror cliche, but not one that's ever before come up in Pokemon, and I'm glad its first mind-bending abomination has been played up as something so gosh-darn cute. Just watch its official music video:
I totally for real didn't feel like crying the first time I heard this song, just like I totally didn't feel like crying when I heard it fifteen more times, or that English cover another ten times, or when the Pokedex told me how Mimikyu stays up all night desperately patching its precious costume whenever it gets damaged.

Naturally, the Pokemon anime saw as instant a hit as the rest of us, and brought us...
...A hissing, twitching shadow ghoul who violently despises Pikachu, willingly joins Team Rocket and constantly terrorizes Meowth. Oh, that nutty Meowth, always losing his mind as he gazes upon that which was never meant to be. Hilarious!

After all that hyping up of Mimikyu as a lonely, misunderstood baby, anime Mimikyu goes full-blown Silent Hill Demon, and it's impossible to decide which is the more lovable interpretation. Wasn't I just saying something on Pyukumuku about how rarely Pokemon are allowed to be "unpleasant?" I'm delighted to finally see a ghost type, or any pocket monster for that matter, really played up as something "disturbing."

These qualities aren't exclusive to its animated portrayal, either, though perhaps more subtle and ambiguous in Sun and Moon themselves. We first encounter a Mimikyu as a "totem Pokemon" boss fight, haunting an abandoned department store where it successfully - if briefly - manifests the appearance of a real, live Pikachu. Is this just supernatural mimicry at work, or was Mimikyu one of the electric mice itself, before some unknown tragedy? All we know is that this particular Mimikyu collects photographs, drawings and merchandise of Pikachu in the back of a dingy closet that actually ceases to exist, door and all, once you've defeated the specter. Was this some stalker's shrine to an object of hatred, motivational inspiration, or relics of a past life? Could it be all three? It's incredibly rare that the core games have ever explored a specific Pokemon's personality to even this extent. ...And, oh yeah, maybe you noticed already that video game Mimikyu can talk. Not only does Totem Mimiku exclaim "Seee Meeee," but an NPC Mimikyu later threatens you in English (or whatever other language you're playing in) and it's no empty threat, either. 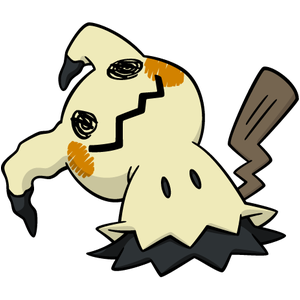 Back when I reviewed Toxapex, I mentioned how unusual it was for one of my favorite Pokemon to be widely popular as a design or in competitive play, and Mimikyu here is just as extreme an example, immediately finding itself in the "over used" metagame bracket for its unique ability, disguise, which allows its decoy head to absorb one entire damaging attack. It's basically a whole free turn of physical invulnerability, and there's obviously a lot you can do with that - but not many options better than Swords Dance, a move that'll effectively double your attacking power and allow the adorable yet horrible, lonely yet hateful unseelie a chance to bathe in the blood of its enemies. 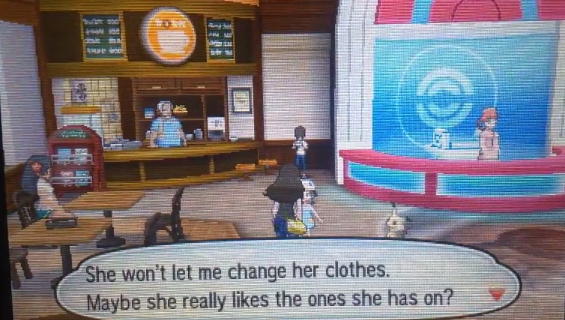 Capturing the hearts of millions, Mimikyu offers an inriguing mix of the sinister and sympathetic with a dark sense of humor and unique design.