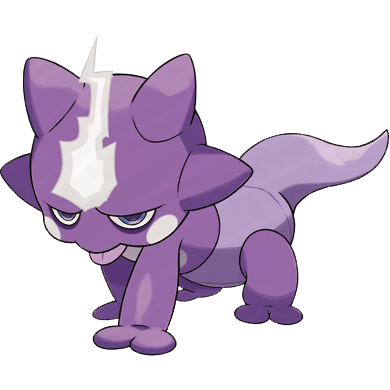 Hhhhrrrm. Hrm. Poison is my absolute favorite type in the series and almost never lets me down; I think Roserade might be one of the only poison Pokemon I'm kind of indifferent to. Poison/Electric is also an interesting new combination, and we were long overdue for a poisonous salamander Pokemon. I mean a salamander in the biological sense, not in the mythological sense like the Salandit line, which are reptiles. Real salamanders are amphibians!

I never would have guessed that's what this purple martian baby was supposed to be, though. I like the grumpy eyes, sure, but when I first saw this thing's sprite, I feel bad for saying that I thought it was one of the fake fan-made leaks and that it didn't look convincingly like it was up to Pokemon's authentic standards. The official artwork makes it look a little bit better, but even more uncannily like a human infant complete with an implied - eugggh - diaper on it, and even its electrical nature is communicated by nothing more than an energy bolt taped onto its forehead. I'm pretty split on this one, honestly. Hilariously wretched baby and intentionally so, but the horns and the energy burst feel kinda like last-minute "let's make this look like a Pokemon" details. 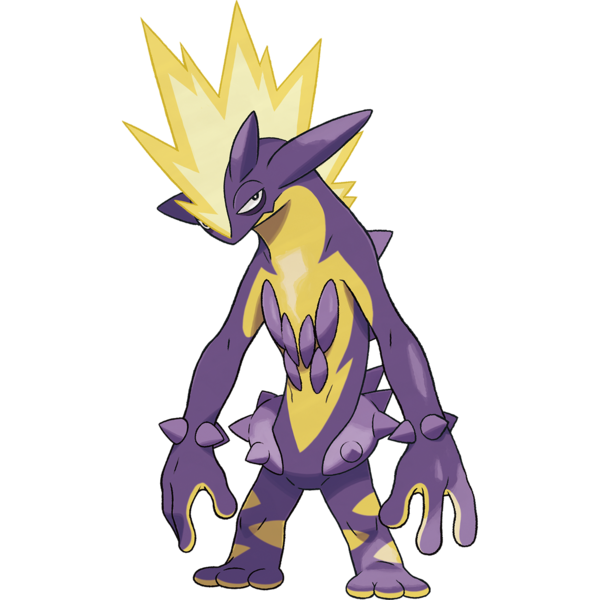 Toxel evolves into Toxtricity, and this is a Pokemon that actually comes fairly hyped for a non-mythical. It's almost marketed the way Lucario once was, as a cool "anthro animal" expected to win a lot of people over. It certainly did, and may indeed be one of the region's most popular creatures, but there's still things I'm a little on the fence about.

First, I'll get the bad out of the way: once again, I thought this thing's 3-d model looked a whole lot worse and couldn't even tell how I was meant to read it. The head spikes look especially stiff and artificial in-game, and even in the artwork, I'm still not entirely convinced those spikes were necessary. I think external gills, like a larval salamander (as seen on Wooper!) might have been more visually appealing, I kind of wish it had a frilly tail and I kind of wish it didn't stand up so straight all the time.

But now, the good: it overally does look more amphibioid than Toxel did by quite a bit. I like its overall structure, love its baggy eyes, its big sucker fingers, the whole idea of an electrical punk-rock Caudate and the fact that those things on its chest actually work like "guitar strings!" It strums and plucks at them in its animations, which supposedly generates both electricity and sound. So it's a poisonous punk rock electric guitar Pokemon, but this aspect was made a more believable part of its biological structure than merely modeling it after a man-made instrument. I LIKE Pokemon that happen to look like (or are literally) man made objects, but I also like the presence of creatures whose more natural looking anatomy happens to have similar functions. This Pokemon also has two different forms, which evolve based on its personality or "nature." Hardy, brave, adamant, naughty, docile, impish, lax, hasty, jolly, naive, rash, sassy and quirky Toxel evolve into the "amped form" we've already seen, while the remaining natures evolve it into this "Low Key" form. Between the two, I think amped looks a bit better, but it's fun that there are two of them so if they were in a band they could be both the lead guitar guy and the Luigi guitar guy. Sorry I know nothing whatsoever about music.

Truth be told, I almost felt these were the worst-looking poison types when I first saw early leaks of their models, they still aren't the kind of poison type I'd really use myself and these are also the only regular all-new poison line this generation, which makes me sad, but I can respect what they represent for sure. ESPECIALLY the fact that according to the pokedex, they make themselves even more poisonous by "chugging stagnant water."

Of course they gave this one its own gigantamax form, the same for either Amped or Low-Key with some physical features of both, and it's a pretty decent one. In fact, for once, I think it makes the Pokemon look even better. I loved the tired looks on their faces and all, but seeing their eyes light up so ominously as they morph into huge, crawling tesla-coil newts is undeniably radical. This form, too, looks better still in its official artwork. So much more natural and alive, really emphasizing what kind of animal we're looking at with its flatter, squishier looking toes and protruding tongue. This honestly just highlights that the shift to 3-d was not as kind to Pokemon as it could have been, as the models for species both new and old feel a lot more like rigid, vinyl action figures than anything else.

This gigantamax form can really wow someone who didn't quite know what to expect, too, since one of its attack animations pulls an entire literal "electric guitar" out of its body. All in all, these don't feel like Pokemon for me exactly, but I know exactly why they're fan favorites and why the development team seemed pretty hyped for them as well.