Perhaps the next four Pokemon we're reviewing should be all on a single page, like I've done for "legendary trios" in the past...but that's not what these are. In fact, we've never seen anything at all like this in Pokemon before, and I'm perfectly happy stretching them out over four whole days. 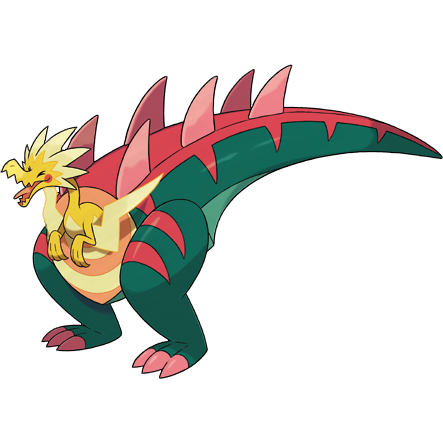 Yes, this is a Pokemon design; a spindly, spiny electrical dinosaur protruding from a set of legs and a tail so mis-matched you can see raw meat surrounding the diminutive torso. It's as if two creatures of significantly different sizes were sawed in half, and then the wrong pieces were haphazardly put back together, and that's because that's almost exactly what has happened. Every Pokemon game has allowed us to reconstitute living prehistoric beasts from fossil remains with the aid of an incredible resurrection machine, but only in Galar can you do so in the great outdoors, all thanks to one intrepid scientist willing to drag her machine around the woods in a wagon, caked in mud, wearing the wrong shoes and named "Cara Liss" in case you didn't get the joke yet. A fine person to toy with the forces of life and death!

The fossils you can find in this region are all incomplete. You can dig up the fossilized bird, but its back half is missing. You can also dig up the fossilized drake, but its front half is missing. No problem for Professor Liss! She'll weld them together for you and create a hodgepodge affront to nature without batting an eye. It is never in any way acknowledged that the wrong parts are going together, with the Pokedex - perhaps written by Cara herself? - claiming that this electric/dragon species always looked like that, duh! It had a small front body, but amazingly large and powerful legs! The funniest part of this is that it's exactly what happened in the early years of dinosaur research, with fossil hunters scrambling to name new species and cobbling together a parade of Frankensteined freaks as a result. Poor Dracozolt was hated almost immediately when it was revealed, by players desperately hoping they'd be able to build a "correct" or "complete" version of what seems very much to be some sort of electrical dromaeosaur or what many call a "raptor," something fans have clamored for since the first generation. I would like those fans to still get what they want, but I love this weird twist they've done with the usual prehistoric Pokemon gimmick, and whether it's protruding from a severed ass or not, the "zolt" or "fossilized bird" half of this creature is adorable. If this is indeed our first true dromaeosaur Pokemon, I'm really glad it has such a silly, cartoony little face on a goofy pencil neck. It's lovely! Don't think I don't notice that it also has Pikachu's coloration and cheek spots, as if they're implying that raptors filled the Pikaclone niche for the Mesozoic era.