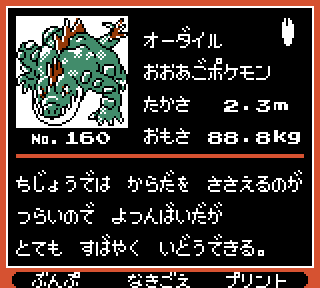 We reviewed a fine selection of scrapped, unused Pokemon back before Galar dropped, but a new leak has been dumped to the internet unexpectedly in the months since, including with it a number of mid-development Pokemon both familiar and unfamiliar. We're going to be reviewing them in an admittedly scrambled order, but first up is a frankly gorgeous sprite of good old Feraligatr. It may have changed little in its anatomy between this design and the one that was released, but DAMN is that a cool pose! Look how chunky and rugged this beastly 'gator is! Which...helped open my eyes to what this poor Pokemon has actually been through.

Good lord. Why did I never notice this before?! It was really brought to my attention by a twitter post, which I think was in turn taken from a /vp/ post. Is this the most a single Pokemon's design has fluctuated over the years? The differences are subtle enough that when you see Feraligatr by itself, you probably always recognize it as Feraligatr, but side by side the proportions and personality every generation differ kind of remarkably, and the difference between its earliest and latest incarnations is pretty severe. Frankly...I don't like it. The scrapped sprite, crouching on all fours, was actually the best this Pokemon ever did look, but the final upright Gold & Silver pose was still fairly serviceable, still a menacing hunched-over Crocodilian Godzilla. It's kind of all been straight downhill ever since, hasn't it?

I guess I just needed to get that complaint out of my system. Next, we move on to a Pokemon that did a lot more than just stand up and lose a little weight...