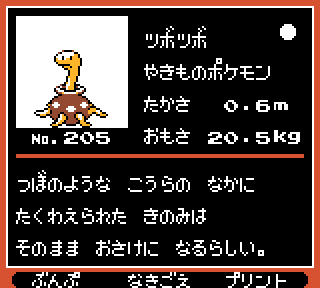 For twenty-esque long, long years, the world has demanded to understand what a Shuckle is. Some sort of bizarre turtle-worm-snake? In a little meteorite shell? And it decomposes thinks to make "potions??" Known in Japan as a fermentation pokemon, it was poorly localized as a "mold" pokemon. Some interpreted it as representing extremophile microorganisms that inhabit rocks, its Japanese name and bug typing lead some to interpret it as an attempted barnacle and others, myself included, leaned more towards it being a scale insect.

...But we now know two new things about Shuckle that dash every one of those theories.

First, early Shuckle did not have a shell at all. At this stage in its development, it was a creature that simply took up residence in Earthenware pottery!

Second...it didn't start out as a bug type, which I guess isn't surprising at all, but it's nice to have confirmation of that.

Already the Pokemon is described as fermenting berries stored in its pot, in other words turning things into alcohol, and it may not look like any of this new information should clarify anything, yet these seemingly inconsequential, subtle new cues are in fact all it has taken to clear the fog once and for all, and the truth isn't even in the ballpark of a single theory ever put forth before. Most famously associated with Okinawa, Japan, wines steeped with entire venomous snakes are actually common throughout East asia, and more than famous enough in that neck of the woods that when you break Shuckle down to its original basics - a snake-shaped creature in a pot of booze - there's pretty much nothing else it could have been referencing. The methods by which this wine tends to be made can be cruel, as you might imagine, and not something you probably want to read about, while the risks of consuming a beverage steeped in venom are quite frightening as well; though venom did not evolve to poison by ingestion, chugging it down with booze can still do a number on your vascular system, and there are even some untested reports of the pickled reptile's corpse still having enough muscle reflex to bite.

It's all pretty dark and sinister - much, much more dark and sinister than this cute, nervous looking little Pokemon wound up being, and I'm inclined to wonder if they ultimately decided that an alcoholic drink, let alone one with a dead animal in it, was simply too grim a basis for a pocket monster.

This would explain why the vase was changed to a natural shell as well as why Shuckle was given bug typing; the concept of a creature steeped in fermented juices remains and the overall design remains, but the result is just removed enough from its inspiration to feel like something wholly original, and I have to say that was not only a good move but one I wish they'd just kept doing. For all my love of how well some Pokemon draw from real life and the gimmicky twists they put on those bases, Shuckle stands as an example of how memorable and whimsical something can be the further it gets from anything too bluntly recognizable.

Shuckle may, in the end, represent one of the most peculiar conceptual journeys a Pokemon has gone through, and I find myself uncertain how to even "rate" this. I prefer the final Shuckle, but this concept is also pretty fascina-I mean WAIT THOUGH, WHAT? WHAT? THAT'S WHAT IT WAS!? THAT'S SHUCKLE!?!? THAT WAS SHUCKLE!?!? THAT"S THE FUKCLE WA;S S HUKLLEE WTAHTTHEFSLK's"F;;!?IDDING ME!?! KDDIDIDDLEDYDING ME RIGHT NOW THAT'S WHAT IT WAS?! THAT?!?!!: