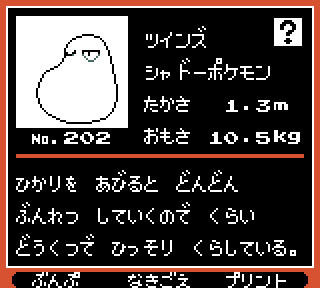 We're getting into some of the good stuff now! Some of the recovered sprites appear to be little more than hasty placeholders, as it obviously the case with this plain, uncolored blob, which is either winking or has a sly little smile on its face. In any case, I actually would have still loved this as a Pokemon; it's no plainer than Ditto, and still exudes quite a bit of character. 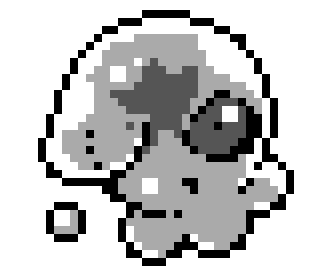 That said, the next serious crack they took at Wobbuffet was more interesting still; a transparent little jelly blob with at least one grumpy eye! This is a much more straightforward "RPG Monster" sort of Pokemon than most, basically a cave-dwelling slime with the interesting gimmick of deflecting attacks. Is that perhaps a reference to how slimes, oozes and blobs in other games just exist to get beat up on for easy experience?

It's a fun little critter and a very viable design, but I'm glad they went with something as uniquely peculiar as the Wobbuffet we all adore, and I almost feel like aspects of this design went on to become Misdreavus anyway, or is that just me? I guess it's just the rough shape and personality of it.