How the mighty have fallen. Or, I guess, how the very briefly overpowered have simmered back down. Psychic pokemon were a pretty big deal back in the original 151, representing some of the game's strongest monsters and strongest attacks. They were weak only to bug type and ghost type moves, but bug and ghost had only a pitifully weak selection of moves at the time, and the game's only ghost types were also part poison, a type inexplicably weak to psychic.

Stronger, more plentiful bug and ghost attacks would have been fine compensation for this, but psychic would be double-nerfed in the second generation by the addition of steel and dark, one of which resists its attacks while the other is completely immune and hits psychic types for double damage.

Adding insult to injury, the psychic type has also grown so common that it hardly even feels special at all anymore, handed out to basically anything boasting a mystical, magical or otherworldly theme and lots of things that don't even have that. I still think of it as a cool, strong and frightening type in my memory, but these days it's hardly more impressive than water...and that's honestly a darn shame.

Psychic works best, for me, when it plays up the weirdness associated with mental powers. Animate artifacts, alien beings and surreal, dreamlike entities capture its feel best of all, whereas many others would be better off recategorized as some other type such as fairy or even normal.

This is another type with so many cool ones, I had to do a second favorites list!

Latias -...or is that one Latios? Whatever - also counts towards its counterpart and their shared mega, of course. I also LIKE Alolan Raichu quite a bit, it should be mentioned, but I don't really feel it needed psychic typing or that it does much with the theme.

I feel like there's just no real reason for these six (plus the other "lati") to be psychic types either, and they could all pretty much either drop the type or switch it over to a typing like fairy, or something.

Psychic is our first type with enough distinctly eerie, unnatural creepsters to warrant this category! Where the HELL are all the disembodied body organs in the pokemon world, anyway? How can you have a franchise with several hundred monsters and no giant brain, or even any creature that shows off a visible brain? It's imagery as old as science fiction immemorial, and it would be perfect for a psychic/ghost or psychic/electric pokemon. And speaking of organs... 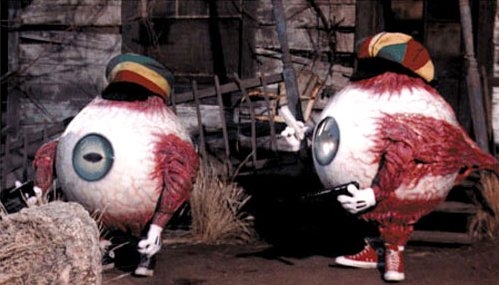 ...Or, like Eye & Eye here from the weird and uncomfortable movie Freaked, a pair of eyeball monsters, acting as one pokemon, duh! Giant eyeballs are as ubiquitous a monster basis as any other, have limitless design potential, and are especially associated with hypnosis.

My ideal ocular pokemon would be as simplistic as Voltorb or Klink; pretty much just a big, hovering eye or two, but I'd also accept an eye with tentacles, an eye with limbs, an eye with wings, an eye with a little body, an eye with a tail...just any eye, damn it! You're killing me here, Gamefreak! You're the ones who love eyes so much you already stick them where they don't even belong!