We've looked at a lot of strange monster toys on Bogleech, but from the name alone, you can guess that 1985's Rocks and Bugs and Things is going to be one of the strangest. Just take it from the commercial:

As advertised, these toys delivered in the rock, bug, and thing department all around. The "rocks" and "bugs" constituted two opposing families, perhaps even factions, fighting over grumpy, presumably delicious little goblins called Mordles. It sounds like a bunch of unrelated toy pitches wantonly mangled together, and the misshapen outcome couldn't have oozed more charm if charm literally came in ooze form. One thing I really enjoy about the TV spot are the "robots, soldiers and heroes" towards the end, encouraging kids to pit these monstrosities against other popular toy lines. Few companies are so willing to openly suggest the intermingling of competing products. 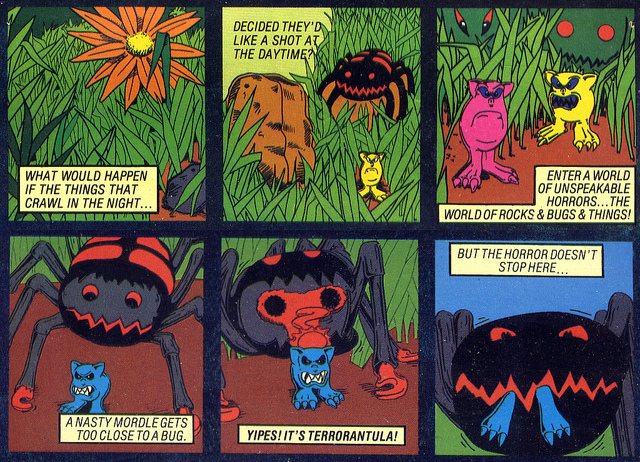 I was just two years old when these cuties hit the shelves, and as suddenly and mysteriously as they had arrived, the Rocks and Bugs packed up their Things and vanished from the toy aisle, fading into obscurity before they ever even crossed my little radar, not unlike that second, mocking wave of the Trash Bag Bunch. 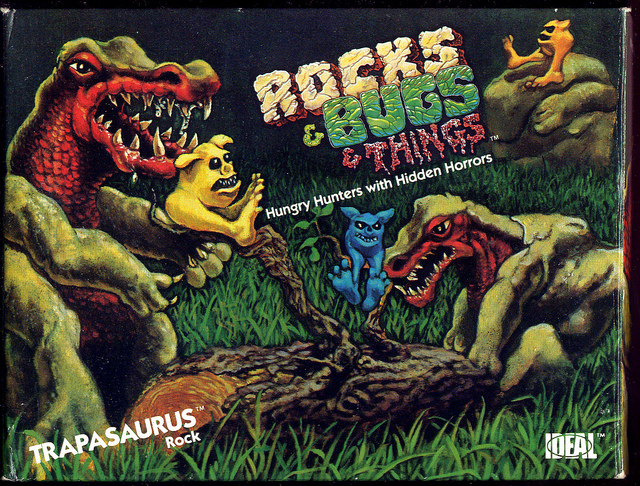 Fortunately, my good internet acquaintance and terrific creature artist (as you shall see on his blog) Joe Whiteford was kind enough to send me a mysterious package not long ago, packed with some of his lovely, debatably NSFW movie monster art and an extra special, extra generous surprise; my very first complete and genuine R.B.T. figure, Trapasaurus! 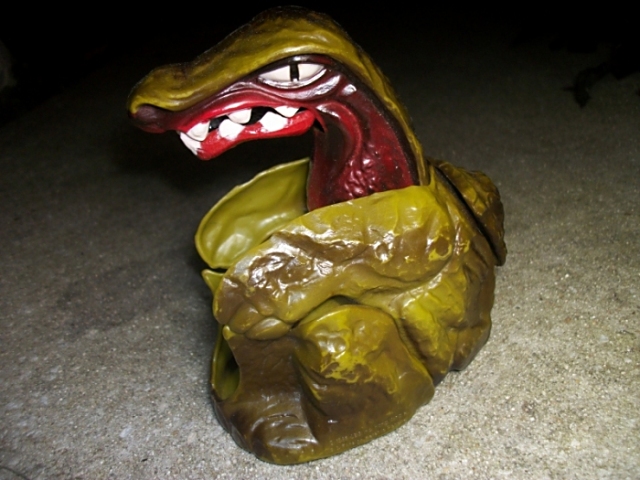 Unfolded from his crafty disguise as a rock shaped like a folded dinosaur, Trapasaurus is by far my favorite of the Rocks, from his swampy, mossy green outer shell to the grouchy, gloomy countenance of his flattened crocodilian visage, reminiscent of those floppy, adorably cheap rubber alligators and dinosaurs you can still find in any proper toy aisle. Something about him also feels a little like one of my favorite Ultraman monsters, Bogun. 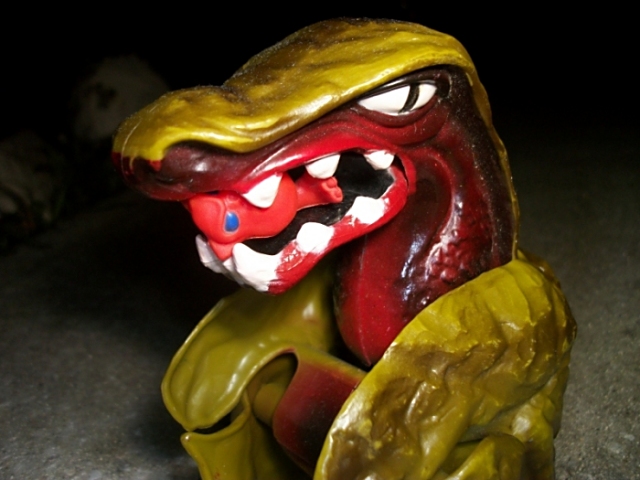 Joe was even nice enough to include a spare Mordle, and feeding Trapasaurus is still exactly as fun as it would have been when I was five. The same switch that pops out Trappy's head also operates his jaws, and the back of his throat opens just deep enough to completely "swallow" the poor little bastard without losing him.

Of course, I can't very well review only one of these beauties, and thanks to the owner of Orange Slime, I won't have to! Everything here, besides my Trapasaurus photos, comes straight from their image archives, where you'll find loads of other freaky, forgotten, nostalgic playthings. This entire review was really brought together by the generosity of others, so let's make the most of it. You are hereby not allowed to get back up until you have heard everything I have to say about these plastic dinosaurs and moths.

No. Especially not for the bathroom. 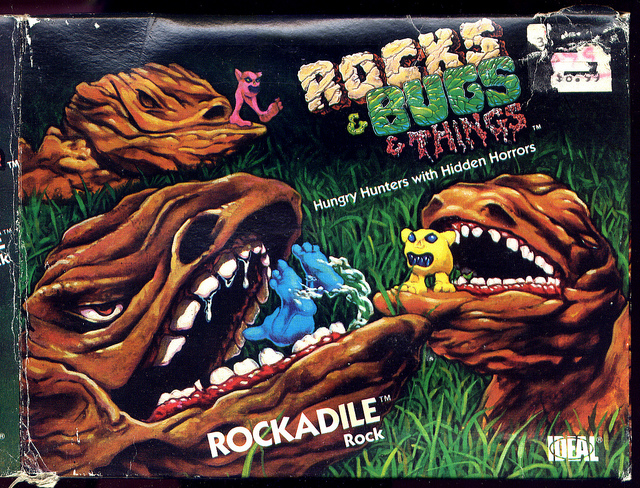 We're going to go over the rocks first, since we already started things off with Trapasaurus, and Rockadile has a similar charm. As the box art illustrates, Rockadile's lower jaw protrudes into a ledge just large enough for a Mordle (or equally tiny figure) to stand on, tumbling the victim straight into his gullet when you flip his lever! 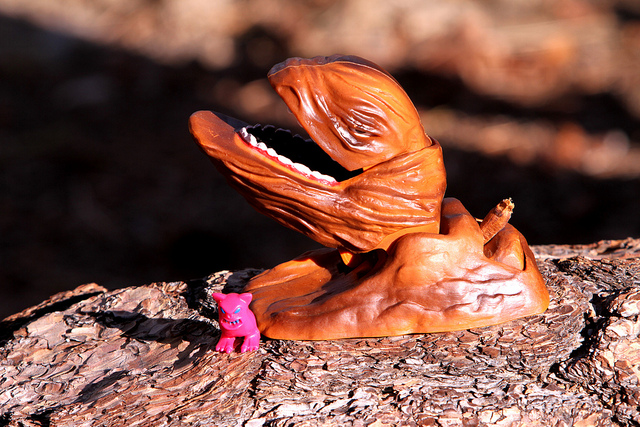 I can't help thinking of this guy like a pelican. A wrinkly, reptilian pelican, with a melted ice cream body. His lack of limbs implies he might not even move around, besides perhaps a slug-like slithering; he's completely adapted to the life of a sedentary, sit-and-wait predator. Or maybe he's supposed to be half buried? 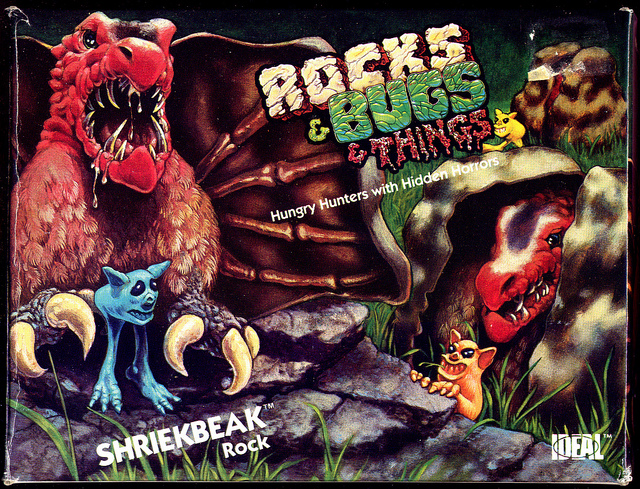 While they were probably thinking "hideous, mutant vulture," Shriekbeak is pretty much a feathered dinosaur, which was scientifically progressive as hell for 1985. I love the Shriekbeak on the right, just cracking open to scope out a potential snack. 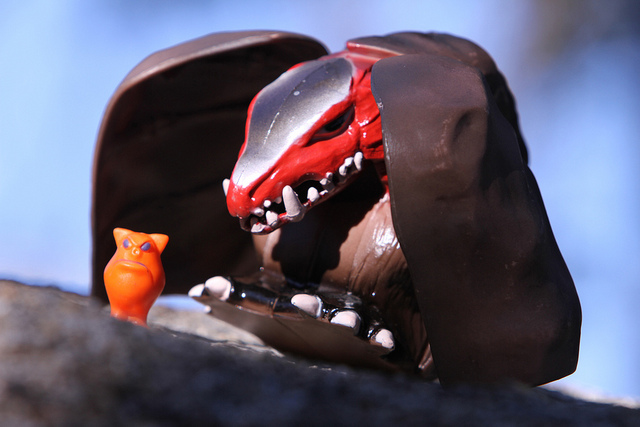 Of all the Rocks, Shriekbeak's sculpt probably looks the least like her dynamic box art, but she still has her charms. They at least kept the finger bones lining the rock halves, and I really like to think she can't actually fly with them. The idea of an avian predator whose wings evolved into one rock-hard, clam-like shell is just too fascinating to pass up. 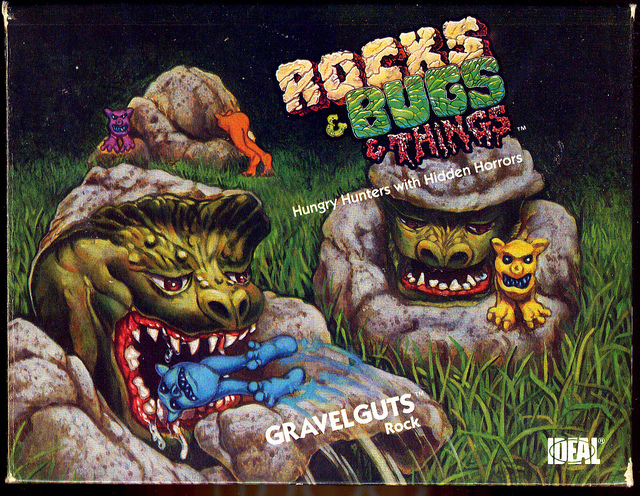 Unlike the other rocks, it's hard to pin down what kind of animal Gravelguts might correlate with. He's a little reptilian, but there's a little primate in there, too. He's probably best described as a Troll, which, if you know your mythology, makes this the most appropriate of all the transforming rock-creatures here. I must also remark on just how oblivious and pitiful the Mordles are getting. How do the little guys even avoid extinction, if they're so delicious and so tragically stupid?

Maybe they need to get eaten. Maybe they're like fruit, filled with little seeds that need a carnivorous rock to poop them out. Only the most suicidal proliferate, each generation even dumber than the last. Adorable. 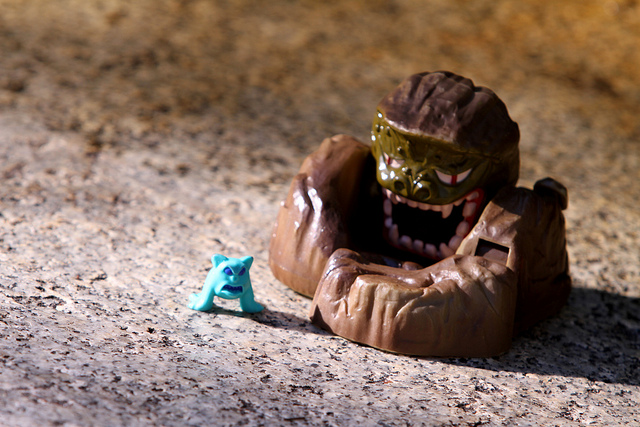 Out of the box, you can see what this guy's gimmick is; in one fell swoop, you can lift his head and his single, giant arm, popping his victim right into his mouth like a handful of M&M's. It'd probably be fun to feed him actual M&M's, too. Then you could close him back up and have a secret M&M stash disguised as an obviously fake rock. Nobody would ever suspect a hiding place that terrible! 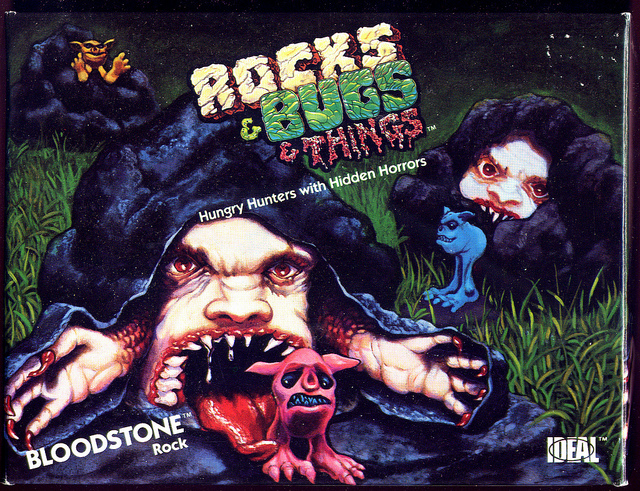 I...JEEZ, WHAT!? After a bunch of dopey, lovable dinosaurs they just throw this taloned, positively nightmarish devil-baby at us, completely without warning? Good. I'm glad. That freaking rules. Even that pink Mordle knows Bloodstone just isn't right. He doesn't even look afraid of getting devoured, just really, really uncomfortable as he's felt up by the slavering tongue of a legless, crusty hell-fetus. 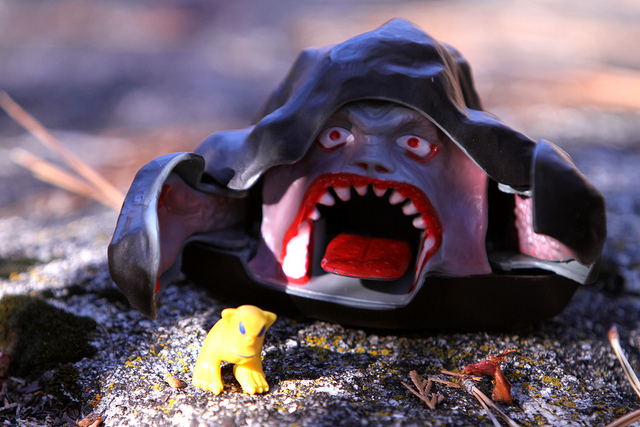 Bloodstone himself isn't quite as terrifying as his box art, but it's not as if a lot of things ever possibly could be. A pale, disembodied human head with a sucker-maw and warty hands is still pretty uncanny as far as these guys go, and probably my second favorite rock after Trapasaurus. 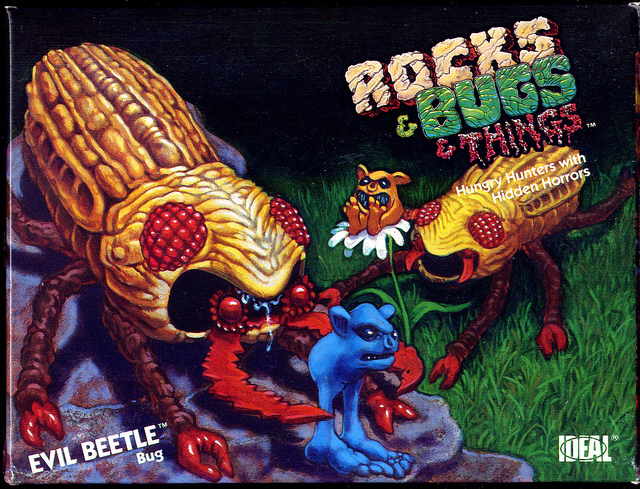 We now enter the "Bug" side of the series, always a good side for anything to have. A little weirder than the rocks, each "bug" simply had a second, concealed face within its mouth. Not a significantly stranger or more surprising face for a bug to have, but a damn interesting concept with a cool aesthetic feel. Naturally, I'm inclined to think of them as some sort of sinister, alien parasites simply wearing Earthly bugs. 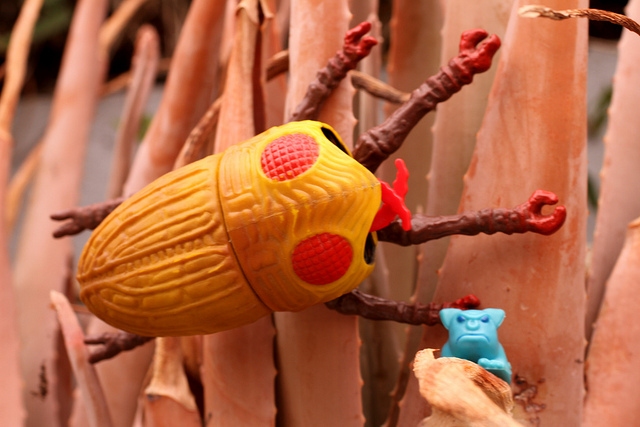 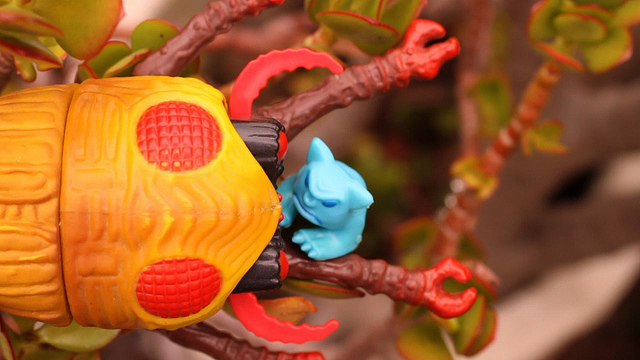 Simplest of the bugs, Evil Beetle's monster-face isn't even that concealed at rest, but his jaws at least open and shut. His bigger eyes are basically situated on what would be the thorax, which isn't too far a cry from the false eyes on a lot of real beetles. 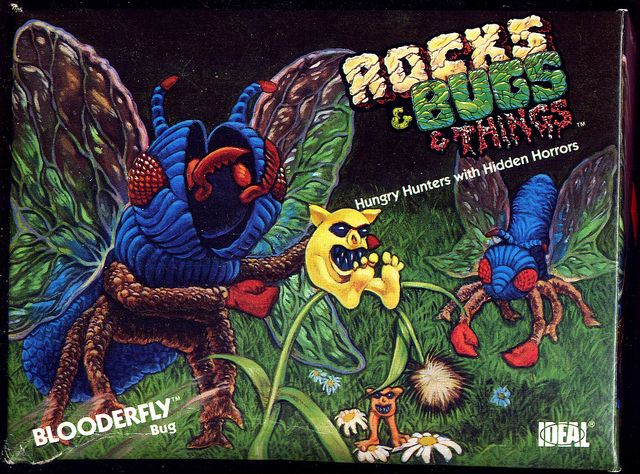 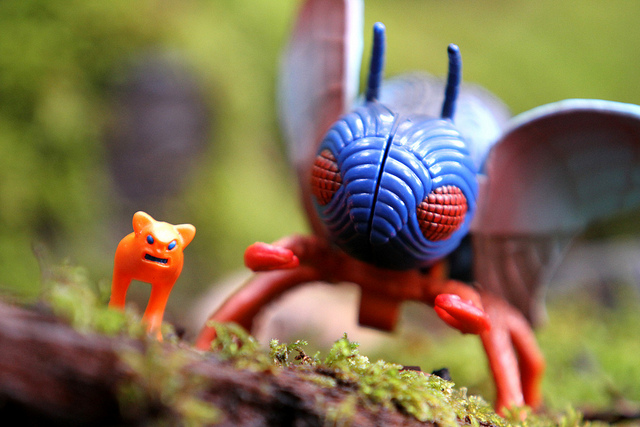 Looking at it now, I suddenly realize that I actually did sort of own one of these as a kid; broken pieces of a Blooderfly that came in a mixed bag of junk from a Goodwill. 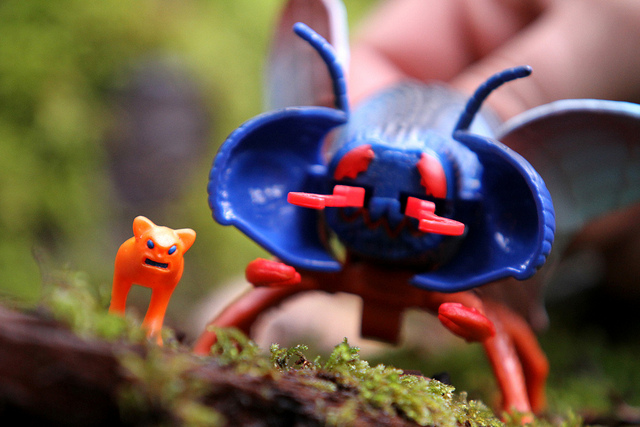 Blooderfly's second face isn't as convincing as some of the other bugs, but I like the little jagged pumpkin-mouth under its mandibles. That's cute. 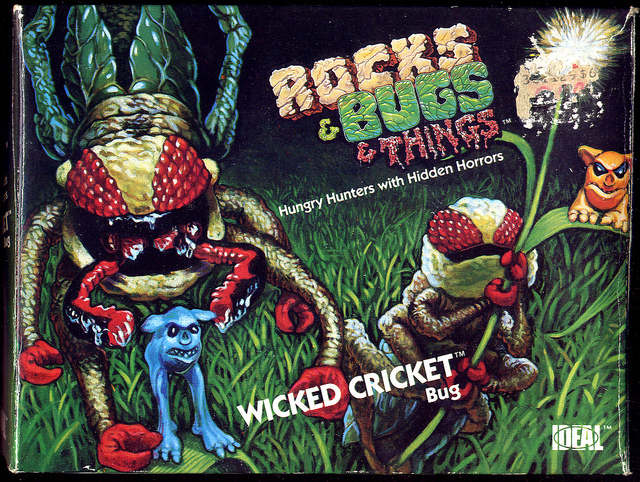 Our unknown graphic artist tried pretty hard to make Wicked Cricket look frightening here, but no amount of dribbling saliva or even predatory stalking can dilute the sheer preciousness of this delightful froggy-locust. He is climbing a dandelion. Oh my gosh. He thinks he's sneaky. He takes himself seriously but he has little mitten feet 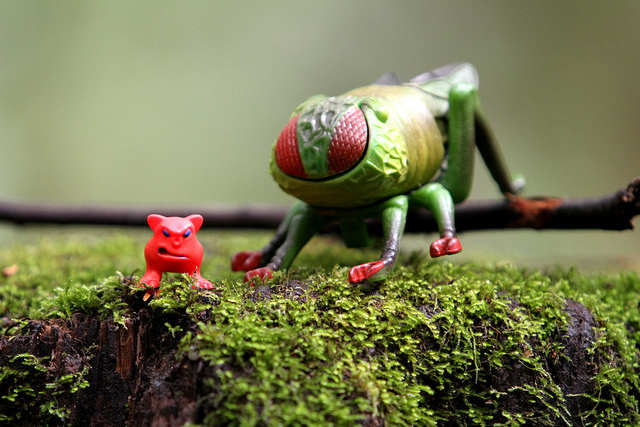 The toy sculpt does little to alleviate Wicky's cuddliness. How can you not see that seam as anything other than an impossibly huge, toothless smile? Look how freaking happy he is. He is SO DAMN HAPPY. 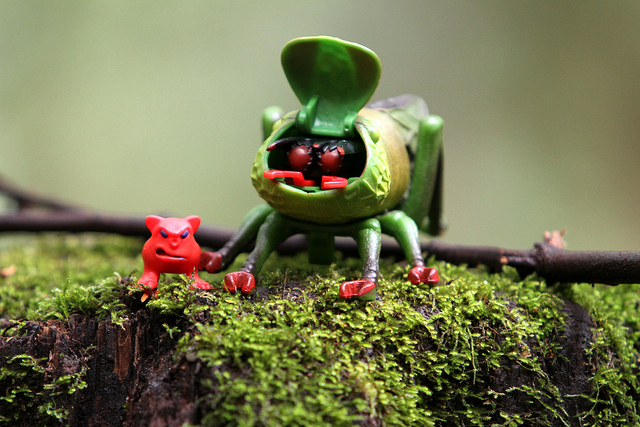 God, even the shadow-demon wearing his skin is adorable. It's just peeking so timidly out of that giant, gaping, delighted mouth, it's like it's afraid to come all the way out. "I...I'm going back in my cricket...if it's all right with you...senpai." 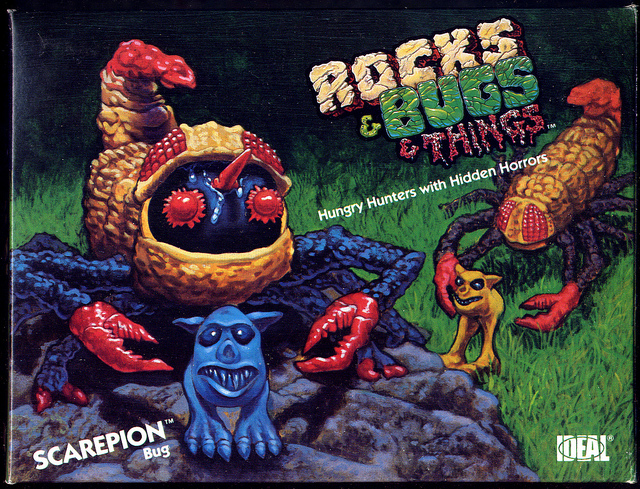 One of two token arachnids, Scarepion remarkably embellishes everything about a scorpion except for its number of appendages. While many artists make the mistake of giving them only six legs, a scorpion properly has one pair of claws (greatly enlarged palps) and eight walking legs. You show 'em, Scarepion! 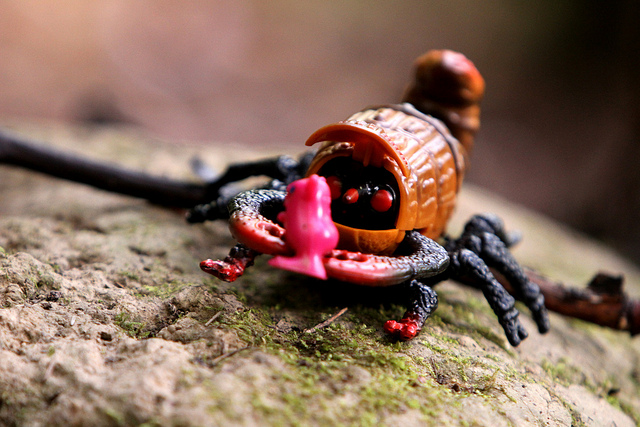 It's a tough choice, but Scarepion's "real" face might be my favorite. Those blank red eyes and single, adorably nose-like proboscis poking out of pure blackness is probably one of the more comical, yet subtly eerie visuals amongst the bugs. Now, I did say earlier that Trapasaurus was my first complete and genuine R.B.T, by which I mean that I found this at a thrift store over eight or nine years ago, and have treasured it ever since. It took me a couple years to even realize it was a bootleg of another toy, molded from a Scarepion in mid-transformation. Who made these, and where they were originally sold, I haven't a clue, but I appreciate the addition of both googly eyes and a squeaker. 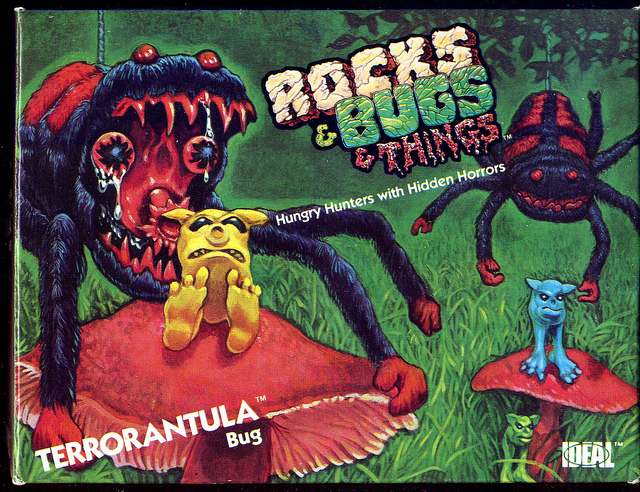 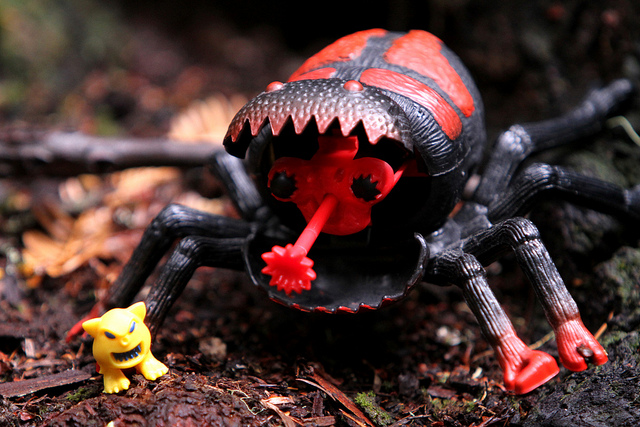 While the actual toy isn't and couldn't be as grotesque as its artwork, all the key details are there; those two beady silly little spider eyes are just as darling as they ought to be, and that freaky leech-like probe extends as the jaws open! It can't really "grab" the mordles like some of the other figures, but at least you can pretend, and it's not Terrorantula's only surprise: 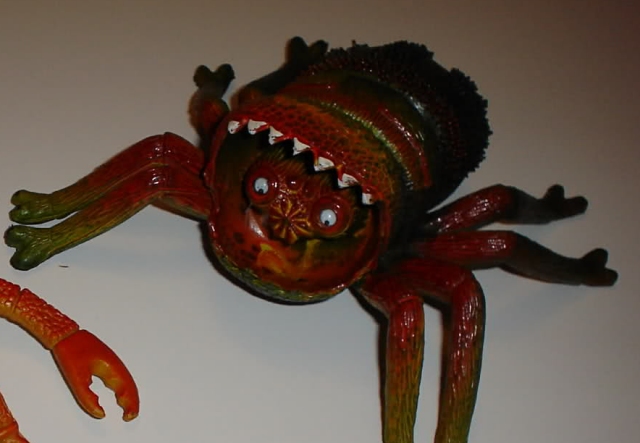 
Just like Scarepion, our Freudian spider-demon was at some point also cast in solid rubber by some unknown, unnamed overseas bootlegger, and I daresay it looks significantly cooler than the original figure. The white teeth, the more sphincter-like inner mouth and the individually molded hairs all make for one of the single coolest rubber arthropods I have ever laid eyes upon, its parasite-face ironically much natural looking than the name brand original. Terrorantula may be the coolest of the "Bugs," but knockoff Terrorantula takes the cake. We may never know what madmen conceived, designed and pitched a bunch of dinosaurs that turn into rocks and insects with exploding faces as a single toy series, but we can certainly tell that they had a lot of fun doing it, even if their creations failed to take off. Pearls before swine, I guess.


Thanks again to Joe Whiteford for finally gracing my life with a Rock and a Thing, and thanks Orangeslime for the other pictures. You can see even more shots in their archive here, including the mini-comic accompanying every beast!