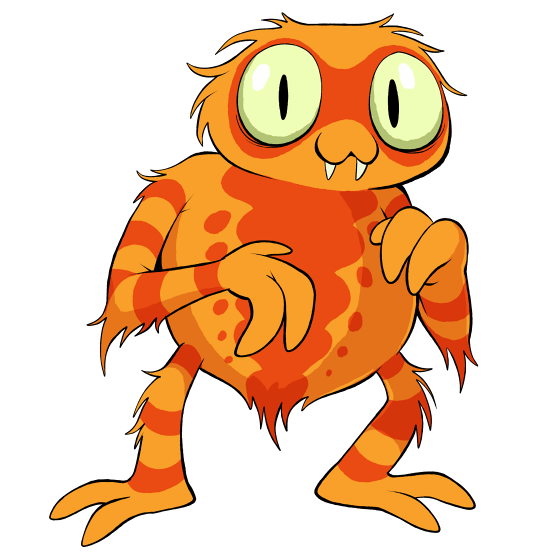 Yesterday, we discussed one of the most common and anatomically straightforward of all the hunting spiders. Today, we look at some of the most exemplary of the web-making spiders! There are over 650 species in the genus Araneus, the most common of which include the European Garden Spider, the Marbled Orb Weaver and the Barn Spider, though it can be difficult to tell some of them apart when different individuals of the same exact species can vary an impressive degree in coloration, pattern and shape!

Typical Araneus do at least tend to stick with shades of orange, yellow, red, brown and tan, which are quite suitable camouflage for the months when they're most active. In fact, if you live almost anywhere currently experiencing fall, and it is October, you just might find some of this genus outside as we speak, having reached their adult sizes by around mid-September! They're seldom recognized as more than just a "generic" spider, but they ought to be recognized as the official spider of Autumn. Some species even go by the common name of "pumpkin spider!"

Araneus are also among those spiders who build the classic, iconic "orb web," and if you've ever wondered how a spider weaves that beautiful pattern but were too afraid to look it up, it's finally your lucky day! 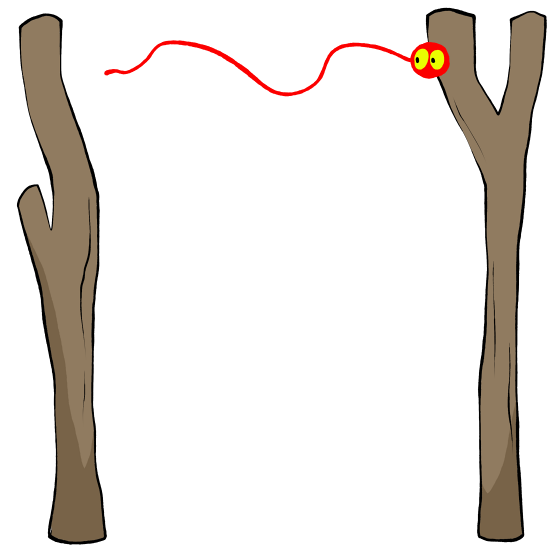 First, our spider finds what it believes to be a suitable place for her web, and we say "her" because it's nearly always the female who builds a long-term web, while males spend their adult lives wandering in search of a mate!

Finding a nice spot between two vertical surfaces, the spider "shoots" her first line across the gap, and yes, sometimes the location and angle of her new home is determined for her by a windy day. 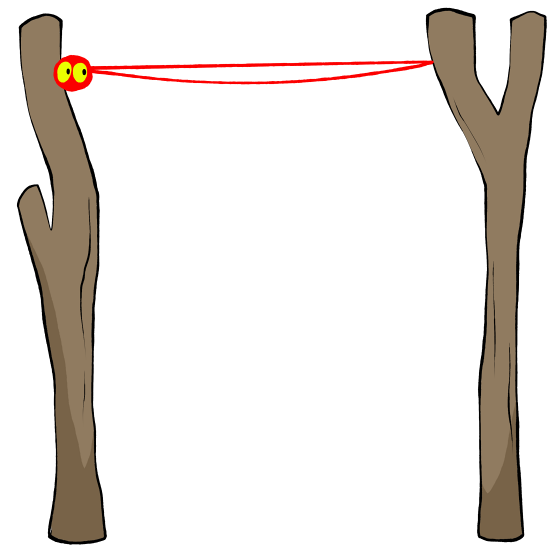 Next, she walks across her first line while dragging a second line the whole way, attaching each end to each opposite side. Now she has two equal cables, right next to each other. 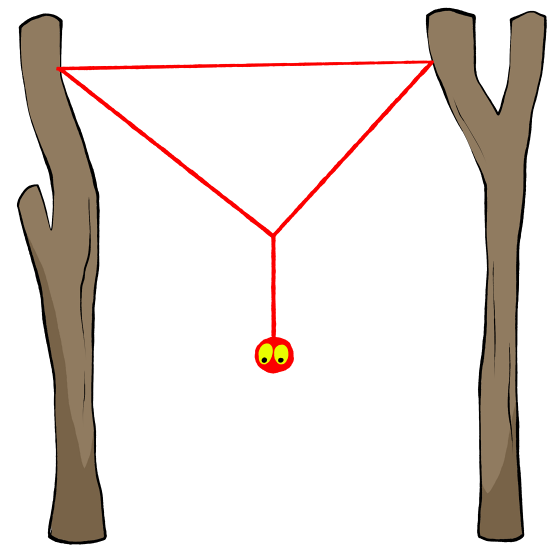 To create the center of her web, the spider now runs back across her second cable, stops half-way, and begins to lower herself down on a third cable, which will tightly pull the previous cable into a downturned triangle. 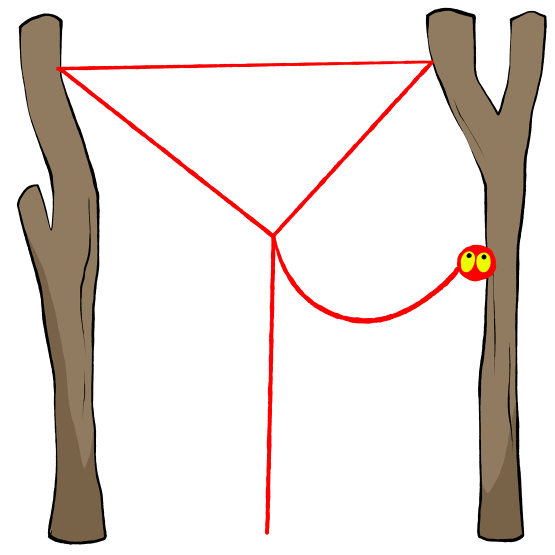 She now begins the task of building the other "spokes" of the web. Over and over she climbs back up and back down again, dragging a new line that she attaches where appropriate to form the radiating lines of the web. 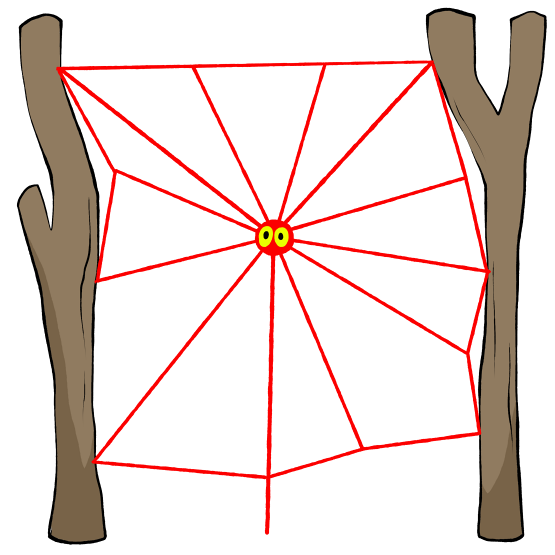 A couple hours of this, and her web is...still not even half-way done. At least she's got the framework up! 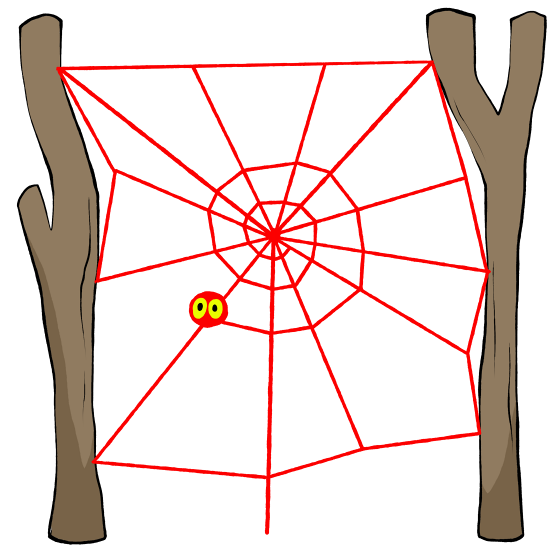 So begins the process of filling in the rest of the web, spiraling out from the center or working back and forth, back and forth. Whatever works! 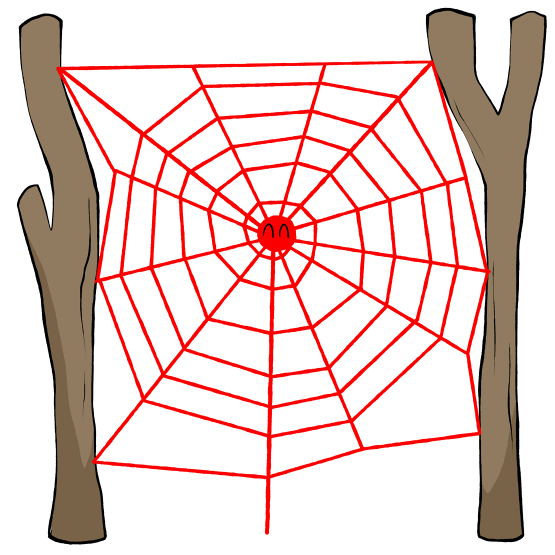 With the web finally complete, she now needs only sit and wait for it to catch her food. Some spiders like to wait in the center of the web, while other species may hide themselves in a corner or even just beside the web. As long as she's in contact with the structure, her sensitive hairs will pick up the vibration of a struggling insect, easily differentiating most prey from the inert leaves or twigs that may also fall in.

Our spider will repair her web whenever it sustains damage, and about once every 24 hours, she'll take all the rest of it down, eat as much as silk as she can, and start the ENTIRE process over.