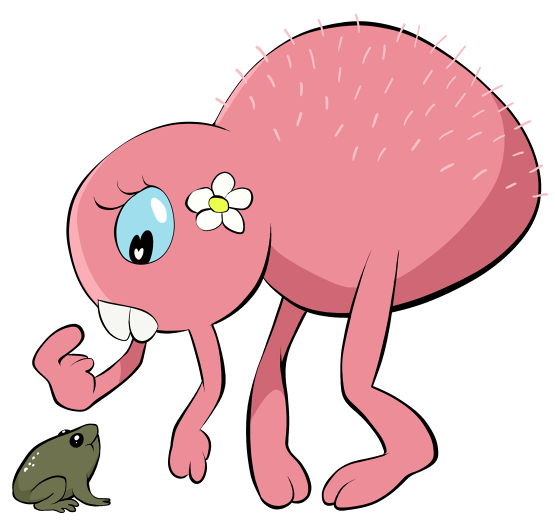 Everyone knows what a tarantula is, right? Just an extra big, extra hairy spider you see in zoos and pet stores? Well, not exactly. The interesting thing about tarantulas is that they belong to a different "infraorder" of the Araneae than almost all other spiders. The tarantulas are Mygalomorphs, while other spiders are Araneomorphs, or "true" spiders, even though, logically, neither should be more "legitimately" spider than the other. The Mygalamorphs were probably even out there being spiders FIRST, so what the heck guys!?.

A tarantula's body plan is more or less exactly the same as its "truer" spider cousins, but all around thicker and beefier, with massive bucktooth-like chelicerae and relatively tiny, very close-set eyes [PHOTO HERE] that we personally always found evocative of a cyclops. Neither a full web builder or a sleek, speedy hunter, a tarantula is more like the spider version of a bear; a big, heavy predator that displays impressive bursts of energy when it has to, but spends an awful lot of its time liesurely lumbering around or resting quietly in a deep, cozy den.

It's through this slower paced lifestyle that tarantulas live to be downright ancient in spider years, with some species exceeding ten to fifteen years or more if all goes well, and the typical tarantula can sometimes survive weeks or even months without any food or water.

It was once a wide spread myth that tarantulas were among the deadliest of all spiders, appearing alongside cobras, lions and brown people as terrifying "jungle dangers" in older pieces of media. I recall an episode of Hanna-Barbera's Johnny Quest in which a tarantula is placed in Doctor Quest's bedroom as an assassination attempt, which is all thoroughly ridiculous to anybody even casually familiar with the creatures today.

There are some Mygalomorphs - particularly some of the "baboon spiders" and trap-door spiders - whose bites are incredibly painful and may even warrant a precautionary trip to the hospital, but a typical tarantula's venom is no stronger than a bumblebee's sting, harmless to anyone without an unusual allergy. What you actually want to worry about is the other defense mechanism employed by certain species, the one thing that keeps such a big, fat, sluggish, juicy bug from falling prey to every bird and rodent in the neighborhood: 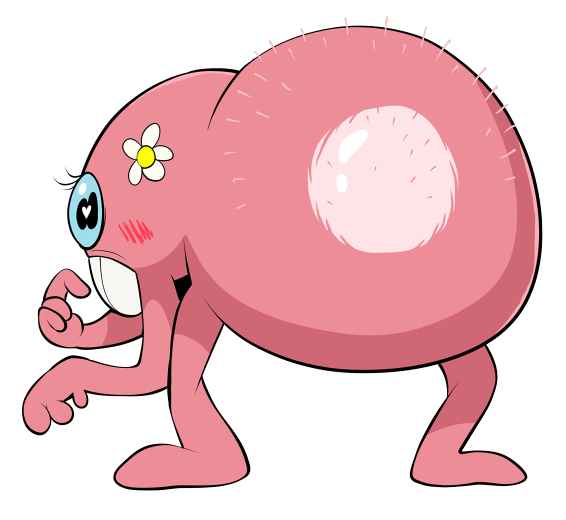 Sometimes, you might see a tarantula with a pretty obvious "bald spot" on its rump, and then you know you're seeing a tarantula who was recently way too spooked. An area on the abdomen of many species is covered in special "urticating hairs," which may resemble beautiful little feathers under a microscope [PHOTO HERE] but are formed from rigid, brittle, and very, very sharp strands of chitin. By "flicking" this area with its hind legs, the tarantula can generate a floating, dusty cloud of microscopic barbs that easily embed themselves in the soft tissues of an attacker. Breathe a few in or get even one in your eyeball, and you're in for an agonizing fit of burning, itching, sneezing, coughing or an even more serious allergic response (in some people!)

With fangs in front and flying barbs in back, a tarantula is well protected against most attackers, but one thing they are almost completely defenseless against are ants, even the tiniest of which can gang up to overpower a fully grown tarantula and very, very easily devour a tarantula's eggs.

That's why at least one known species of tarantula spider lives in a symbiotic relationship with tiny, ant-eating frogs. The female allows the amphibians free run of her burrow, preying on virtually any other little frog, salamander or lizard she may encounter but instinctively recognizing precisely the one that can protect her offspring from a ravenous army of miniscule warriors. It's remarkably close to how humans and cats learned to live together, if we'd had to worry about mice straight-up eating our babies, I guess.

If you would like to bring a tarantula into your life, bear in mind that they don't necessarily enjoy being handled, so they may not be killers, but like a fish, they're more of a pet to look at and admire than to hold. The upside is that their care can be practically fool proof. Busy schedule? Depression? Chronic forgetfulness? Many tarantulas can get by being fed just a few crickets a month (though they prefer every week!), and many outright prefer to live in small, confined spaces, naturally spending most of their time in burrows and quite content to live in a half-gallon tupperware as long as food occasionally falls in from the sky. Between this and sometimes letting frogs loose in their house, tarantulas above almost all other spiders truly know how to live.