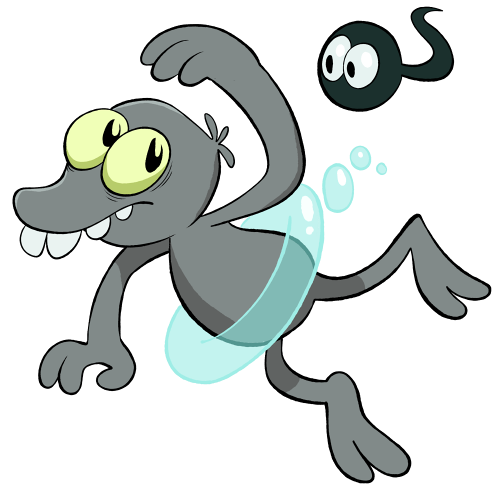 We don't usually associate spiders with aquatic environments, but there's a pretty interesting variety of eight-legged amphibians out there. Some spiders can skate on the surface of water, some can dive under and swim for extended periods and there are even spiders who lead a crab-like existence by the seashore, hiding in air-filled tunnels during high tide and emerging at night to hunt for tiny fish and invertebrates. Only one spider, however, lives most of its existence completely submerged. Not even one small family or genus, but just one lonely species, Argyroneta aquatica.

Like most other arthropods, spiders breathe through tiny pores on their abdomen rather than through facial orifices, and so it is the rear end of a diving bell spider that requires an air supply. This is achieved thanks to a coat of long, specialized hairs that can firmly trap a thin layer of air against the creature's body, encasing its abdomen in a tight "water bubble" it must first collect from the surface of its pond.

The silvery "oxygen tank" does, unfortunately, make the spider rather buoyant, and it takes extra effort for the animal to remain submerged, constantly swimming downward or holding tight to aquatic plant life. This has interesting resulted in one of the few spiders in which the male is larger than the female, because like many spiders, the female builds a web to rest in while the male spends his life on the move. This means he has to spend a great deal more time struggling against the pull of his own air bubble, and therefore benefits from additional weight and muscle! 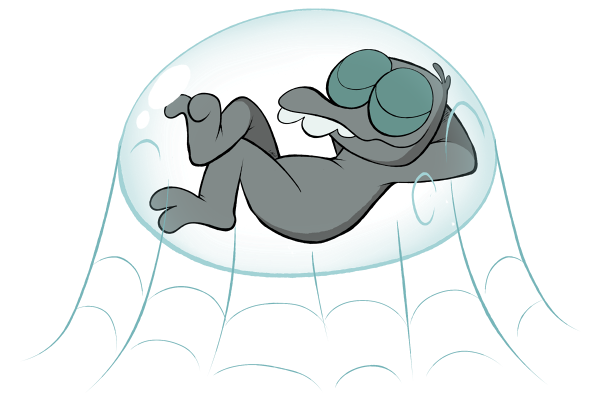 As for that littler female, the underwater web she constructs is the very "diving bell" of the species namesake; a bubble of air held in place by her silk, just large enough to comfortably house her entire body and a few cocooned prey items. She doesn't use her web to capture her food, but leaves regularly to hunt such animals as pond shrimp, diving beetles or even small enough fish and tadpoles, bringing them back to her dry lair for consumption.

She also leaves regularly to collect more air from the surface and bring it back down to that lair, but this is not in fact to replenish her oxygen supply, per se; what's really going on is MUCH more advanced!

The webbing that holds her bubble home in place is incredibly fine, and the microgaps between the silken strands are filled in with a strange hydrogel unlike any material we have found anywhere else in the natural world, probably secreted along with the silk, but we actually still don't know!

At a molecular level, the delicate membrane is just so structured that a minute pressure difference ends up pulling oxygen out of the surrounding water...but heavier, toxic carbon dioxide diffuses back out of the bubble. The web, itself, is a breathing mechanism, and can be likened to an artificial set of constructed "gills."

Unfortunately, while this amazing process keeps our spider from asphyxiating in her own house, it also allows nitrogen to escape along with carbon dioxide. Slowly but surely, the bubble suffers a net loss of matter greater than its intake of oxygen alone, and so it steadily shrinks in size until our spider must return to the surface and gather more atmosphere for her apartment.

IN SUMMATION: Water Goblin collects nothingness to build a private void in a jelly tent that breathes for her.