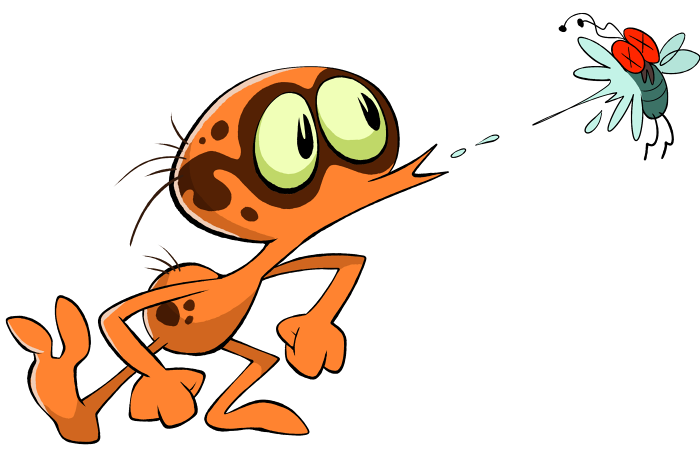 How many spiders in movies, cartoons, comic books and video games have been shown producing silk from their mouths? For that matter, how many have been shown "shooting" strands of silk, from any end, to entangle prey at a distance like Spider-Man's web shooters? It's a lot of them. Trust me. I've seen a lot of media with spiders in it.

In reality, however, both of these characteristics are almost unheard of among the Araneae, with almost all spiders producing silk exclusively from the spinnerettes on their abdomens and only "launching" silk when they need to start a new web.

We say "almost" unheard of, because just one group of spiders, the Scytodidae, break the rules and hunt like they're straight out of some fantasy game's bestiary.

Most scytodids can be recognized by the combination of extremely thin legs, a cat-like pattern of dark stripes and splotches on a tan or yellowish body, and a more enlarged, dome-shaped cephalothorax than most other spiders. It's that bulging noggin that houses a unique pair of glands connected to its fanged chelicerae, within which a concoction is cooked up from both the spider's venom and its liquid webbing. When this substance is forced out through the hollow fangs, the result is a dual stream of not just silk, but what is technically and very bad-ass-ed-ly referred to as "venom impregnated" silk, already weakening and paralyzing the target before the spider even lands a bite! This is why these creatures are known as "spitting spiders," though I really, really wish it was "spittER spider," or better yet, "spitterspider," all one word, because... just say it out loud already. Spitterspider! Spitterspider!

The attack has a range of less than an inch, but that's still almost twice the body length of many spitterspiders, and they can spew enough fluid to immobilize thir prey in as little as one seven-hundredth of a second, during which the spider vibrates wildly from left to right to spread its spit in a "criss-crossing" pattern. Once it feels safe to do so, the spitterspider closes in for a finishing bite and wraps the prey in pure silk from its abdomen, so it can basically do whatever any other spider can do, but hides an additional surprise attack, and that's just perfect, because the #1 preferred prey of every SPITTERSPIDER is in fact any OTHER spider...even far exceeding them in size, strength, speed, brainpower or toxicity.

Imagine facing off against what should be just a weaker version of yourself, completely oblivious to the fact that they've got a first-turn ranged attack you never bothered to learn. I guess in simpler terms, they've got a gun. This is the spider world's version of a little pipsqueak who happens to be a master sharpshooter.

Not always a lone gunman, however, at least one species, Scytodes socialis, is among those rare few spiders to exhibit social behavior, actually constructing a communal web in which over a dozen males, females and juveniles may coexist, cooperate in the capture of prey, and share all prey throughout the family without any observed infighting or cannibalism, so, there's another commonly "fictional" spider behavior displayed in reality by at least one species of SPITTERSPIDERS!!!!