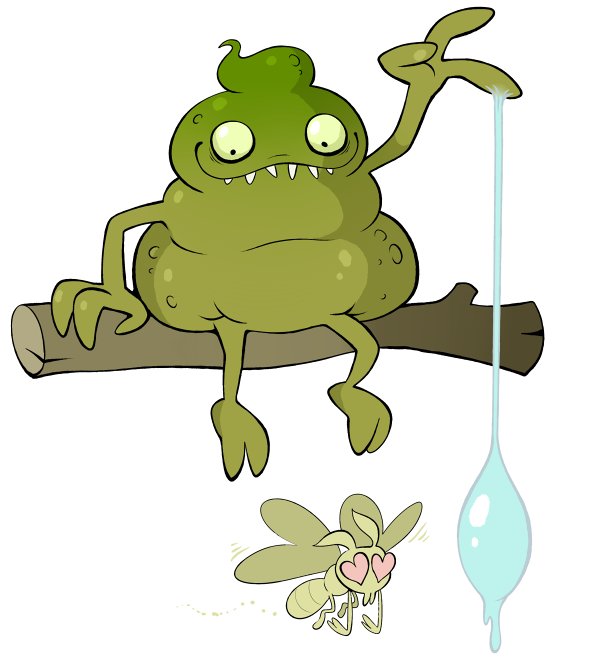 We're kind of getting into an "unusual use of silk" theme for our current entries, so we might as well keep that up! We've got at least five more spiders for you that do cool, unusual things with their webbing, and today's is one of my favorites!

A number of spider species are considered "bolas" spiders, and all of them are actually just somewhat deviant members of the common orb weaver family, Araneidae. Instead of constructing a complete orb web, the females of these spiders may build only a few strands to hang from or seat themselves directly on a twig, concentrating the rest of their silk into a single, dense, sticky ball on the end of a long "fishing line." [PHOTO HERE by MJ Hatfield!]

This is actually a special adaptation for the hunting of moths, whose scales often rub off on a traditional web and allow the flying insect to escape unscathed. Smacking a big glob of superglue directly into the target is a surefire way to circumvent this problem, but leads to the further dilemma of how the spider actually gets close enough to a moth to pull off such a tricky maneuver.

The solution? Each species of bolas spider has adapted to closely imitate the female mating pheromones of a different type of moth, making them some of the only spiders in the world who lure prey with aromatic mimicry. We previously saw something similar in a species of crab spider that imitates bird dung, and interestingly enough, many bolas spiders also disguise themselves as wads of poop, helping them to go unnoticed while they're busy "fishing." A few species look more like clumps of soil, snail shells or scraps of tree bark, and the astounding Ordgarius magnificus from Australia imitates the same moth it preys upon, complete with bright yellow eyespots. HERE is a photograph by Dr. Greg Anderson!

Once a bolas spider detects the presence of a circling male moth, she begins to swing her bolas around wildly, and as the moth closes in, he becomes almost certain to collide with the adhesive trap! How absurd is this entire process, really? A randy little dude follows a trail of perfume one night, hoping to score big, only to get bonked over the head with a ball of superglue on a string and gobbled up by a fat, stinky dungheap with legs...unless it's the kind that looks like a giant, staring face, of course, there's that one too. Can't forget that one.

I know the point here is to sow appreciation for spiders as something other than Horror Monsters, but it's difficult to really put this one into words any other way, and really, what's wrong with that? You all love wolves and bears and big cats and killer whales in spite of or because they're fierce and crafty predators, so surely you can find it in your heart to admire the Sex-Fishing Turd-Ogre from a similar standpoint...and of all the animals we just went over, this is the only one too small to kill you, and would only care either way if you happened to be a horndog mothman.