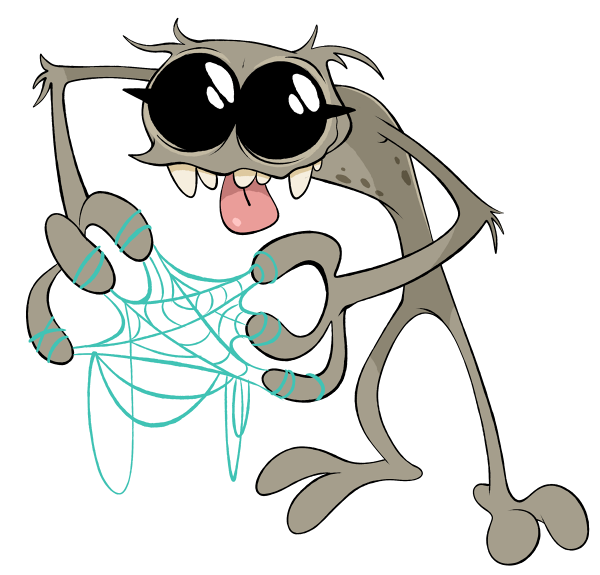 Of all known spiders, the Deinopidae might have some of the coolest and most menacing faces, with relatively huge forward-facing eyes set in what looks remarkably like a furrowed, angry brow and has earned them their most common name. Their next most common name, however, is the "net-casting" spiders, and describes what really sets them apart from other web spinners.

Instead of the usual, finger-like spinnerettes, a net-caster has a set of flattened panels densely covered in fine pores, a structure more like a tiny, organic cheese grate on her rump. These pores produce strands of silk only a few nanometers thick, which bunch together into stretchy, "woolly"-looking ropes that appear pale blue in most light.

Hanging by a few strands of more normal silk, the ogress creates a relatively small web of these fuzzy cables, and actually holds it in her own front legs [PHOTO HERE!] as she waits for a tasty insect or arachnid to pass beneath her. She usually stakes herself out just above a thin plant stem or twig; a narrow route many arthropods are likely to utilize each night. You can probably guess what she does next, but the capture mechanism isn't as simple as you might think.

Just like a spider's own delicate, feathery feet, those woolly cables stick to surfaces at the molecular level, and what's more, they "sop up" the waxy coating that protects arthropod exoskeletons, the cuticle that makes their bodies so slick and shiny. The very instant our spider touches her little hand-net to an insect, it "dries out" the insect's body surface and bonds to it like velcro, without the use of any liquid glue.

This is why our spider has those huge, goggle-like eyeballs; because instead of waiting to feel the vibration of a meal in her web, she has to see the prey pass by her, often in pitch darkness, and bring the web to them from a distance. Amazingly, these eyes have superior night vision to nocturnal vertebrates like cats or owls, which isn't anatomically possible for most arthropods. Those animals are able to see so well in the dark because of a special tissue membrane inside of the eyeball, the tapetum lucidum. While spiders don't technically have an equivalent organ, the eyes of the ogre-faced faced spider grow a new membrane of similar function every single night...and as the sun rises, the intensity of the light dissolves the membrane back to nothing.

Upon her final molt, the female ogre's eyes grow larger than ever - all the better to nourish herself in preparation for possible motherhood - while the male's eyes grow smaller, now that he's shifting focus away from food and more towards reproduction.