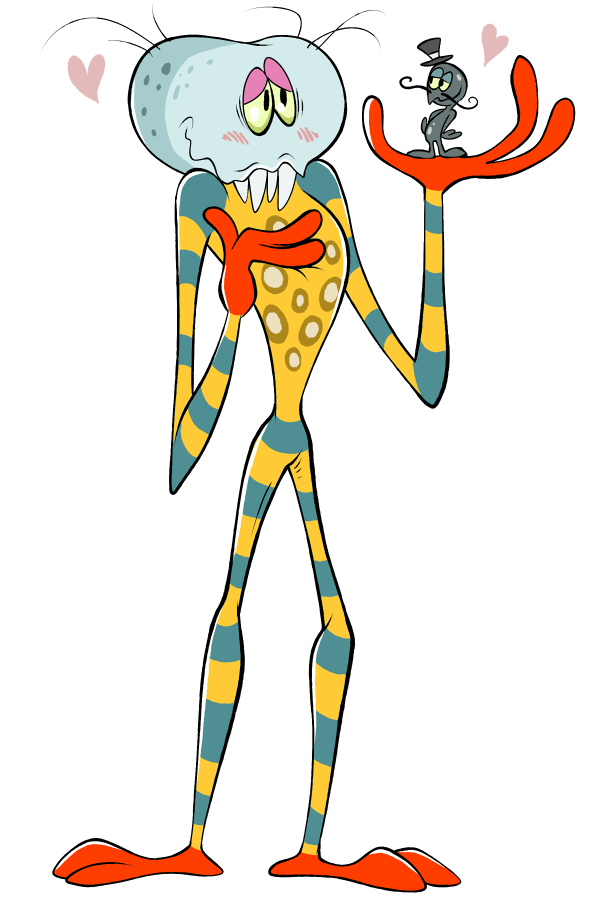 I'm obviously someone who has seen a lot of "bug identification" groups here on the internet, and I can't count the number of times I've seen one of today's spiders posted in an almost panic-stricken tone. Those unfamiliar with the genus Nephila may be awed and terrified by their first encounter with the largest web-spinning spiders in all the world, and with their long, spindly legs, ghostly pale faces and magnificent color schemes, phrases like "this looks POISONOUS AS HELL" or "just how hard will this murder me!?" aren't uncommon.

Of course, size is never an indication of toxicity in nature, with the most venomous animals often erring on smaller sizes, and once again we have an exceptionally mild-mannered arachnid whose bite, if you can make her bite, while sometimes pretty painful, is never normally serious. These spiders are so laid back, in fact, that I've seen them displayed at three different zoos or aquariums with no "enclosure" to speak of, left to hang out in a corner or a potted plant where they simply never bothered to leave their web. As usual, it's only the male who really wanders, and of almost all known spiders, male Nephila are the very, very tiniest in comparison to the females. See for yourself HERE! With that fearsome yet spectacularly colorful appearance, some nephilids, especially Nephila clavata, are known in Japan by the name Jorogumo, which can be written in Kanji as either "woman spider" or "entangling newly-wed woman." Folk tales hold that this spider is actually a youkai that change in size and shape at will, often taking the form of a beautiful woman to charm her human prey. In this 1776 illustration by Toriyama Sekien, the Jorogumo even seems to wield her own spiderlings (or would those be males?) like attack dogs...and they can breathe fire.

Real nephilids do have one interesting magic trick up their sleeve, though you have to be a honeybee or a butterfly to really appreciate it...and by then, it's probably too late for you. The silk of a golden-silk spider is, as you might have guessed, literally golden in color, and this pigmentation serves an amazing dual purpose. The exceptionally thick, strong silk ought to be exceptionally visible to the spider's prey - a web of yarn versus a smaller spider's web of dental floss - but in direct light, the yellow gleam is actively enticing to many insect species, resembling an even warmer, brighter patch of sunshine. This doesn't work under dimmer conditions, but that's okay, because the yellow tinge only causes the web to "blend in" with lower light conditions, shifting from an attractive beacon to an invisible trap with both location and the time of day!

Visibility isn't the only challenge facing such a large, heavy spider in a large, heavy web, either. She's slow and cumbersome enough that it would never be feasible to remake her web as often as other orb-weavers, so she must take down and replace only a small section at a time, and on windy days, she may cut a hole in the center so the breeze can pass through without ripping her home to pieces. The upside, of course, is that this tough web can entangle such bulky, formidable prey items as the stag beetles, dragonflies, cicadas and even small vertebrates. Nephila webs have been observed trapping lightweight birds, lizards, frogs, snakes and even bats, most of which would have been the ones eating our poor spider in any other situation.

It's no wonder that this silk has been used as a natural window screen or even fishing net by a number of cultures around the world, and its potential applications are an ongoing topic of research, though effective collection of the material has presented a few challenges, as it apparently took over seventy people, four years and a million individual spiders to produce just a single 2.5 pound tapestry. An incredible solution to this issue was actually developed in the early 2000's by researchers at Nexia Biotechnologies, who successfully used genetic information from Nephila clavipes to engineer a lineage of domestic goats who secrete recombinant silk proteins in their own milk. Mass production of these proteins could have meant safe, biodegradable alternatives to everything from medical sutures to the fishing lines and nets currently strangling endangered sea life, but the project was met with a disappointing lack of corporate interest and an "ethical opposition" to things that "aren't natural," (a line we already irreversibly crossed when we clogged the sea with plastic, I've gotta say) and the company went bankrupt by 2009.

Fortunately, the spider-goats were saved by the University of Wyoming and successfully bred with their modifications intact, with research still ongoing slowly but surely.