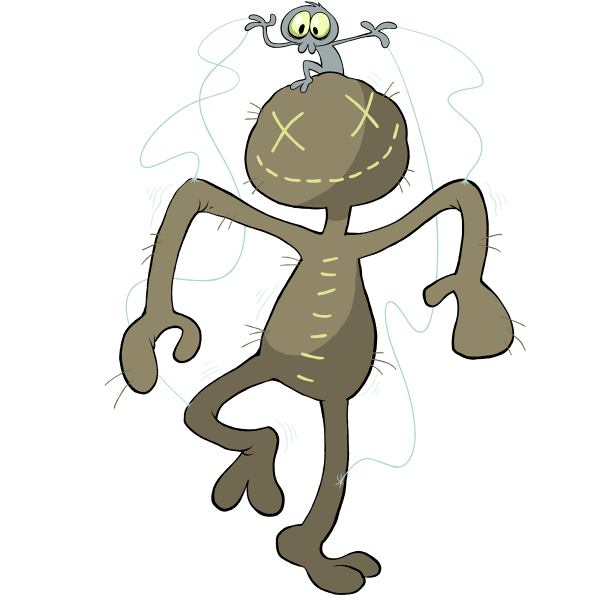 Today's spiders are actually several different species, found around the world, who all happen to employ a remarkably similar defensive mechanism. Certain members of the orb weaving genus Cyclosa are well known to keep a lot more trash lying around in their webs than more typical spiders, and employ the junk for varying degrees of camouflage.

Some species in this genus just look very similar to a clump of dirt or their own wrapped-up prey, the equivalent of disguising yourself as a discarded pizza box in your own filthy, filthy apartment.

Other species take it a more organized step further. The "trash line" spiders, such as Cyclosa turbinata, arrange their garbage in a perfectly straight row through the middle of their web, leaving a small gap in the line where they can rest inconspicuously.

Cyclosa mulmeinensis puts in even more effort, deliberately wrapping trash in silken bags roughly its own shape and size. More amazingly, when faced with a predatory wasp, the spider "blurs" itself by vibrating in place, its normally black and white body appearing as grey as its dummies.

These are all clever ploys and would be impressive enough, but in 2012, a new Cyclosa from Peru was found to arrange bits of dirt into the actual shape of a spider, with a central patch for the "body" and multiple thin "legs" that actually bend and twitch when the real, far smaller spider plucks at the center of its web. This is a spider that builds a giant puppet of itself, and the first real footage can be seen HERE.

Even more remarkably, another Cyclosid was described that same year from the Philippines, exhibiting exactly the same behavior with an only slightly different style. The Peruvian species builds a puppet with the legs pointed downward, while the Filipino example splays the legs in all directions.

Separated by nearly 12,000 miles for millions of years, the two spiders would have evolved these sophisticated tactics by unrelated convergence, but that actually shouldn't be surprising at all. You need only start with a spider that doesn't clean its web so much, and every time a predator has difficulty spotting the real spider amidst its own clutter, the genetic inclination for that messiness is all the more likely to be passed on to a new generation of young. From there, it's a simple and easy new mutation, a pretty minor behavioral quirk almost any creature could develop, for some spider down the line to leave more of its trash in the center of its web than anywhere else.

So then that helps a spider survive, some day, and that "quirk" is passed down again, to thousands and thousands of offspring....and so on, and so forth, until the behavior becomes helpful enough that there's little room anymore for significant improvement, new habitual "quirks" cease to make a meaningful difference and the behavior stabilizes, as we now observe, and will likely continue this way until the emergence of some new enemy that renders the behavior obsolete. The spider doesn't need to "know" what it's doing or why; it simply adapted a tendency to leave a big mess that spills out along the spokes of its web, and the "puppet spider" was perfected, more than once, by the sometimes surprisingly predictable inclinations of good old natural selection!