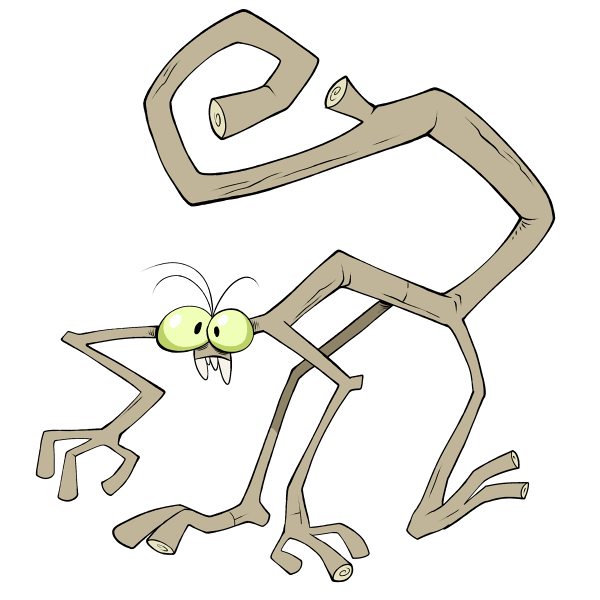 Ariamnes is another weird group of Australian spiders commonly known as either "whip" spiders or "twig" spiders for their extremely long, thin, flexible abdomens. During the day, a female twig spider hangs motionless from just a couple strands of silk, looking very much like a stray twig caught in the remains of some long-gone spider's web...though this does not, surprisingly, appear to be the true "goal" of their camouflage. When put to the test using a series of "dummy spiders," it was determined that the elongated shape of a twig spider with its legs held together is confusing to predatory and parasitic wasps, which already "have difficulty perceiving linear objects." It didn't matter if the spider stood out against a backdrop of sticks and leaves or not; it was simply the shape of a straight, thin line that left wasps confused as to what exactly they were looking at.

At night, when most wasps tuck themselves to bed, the twig stirs to life and begins her odd hunting strategy, dangling only a single silken line or two down to the ground. This line is actually not sticky, but apparently makes an enticing path for other spiders to explore. In some cases this may be a tiny, hatchling spider possibly on the hunt for stray scraps of food. In other cases, a spider-eating-spider may believe it has just found the beginning of a more ordinary spider's web. Most commonly of all, however, are wandering male spiders in search of a female, which end up comprising the majority of the twig spider's diet. The male spider thinks he might follow the silken path to a potential mate, but as soon as he touches it, the twig spider drops down on another line and immediately begins to wrap up her prey in silk, using special combs on her third pair of legs to make this action even swifter and easier!