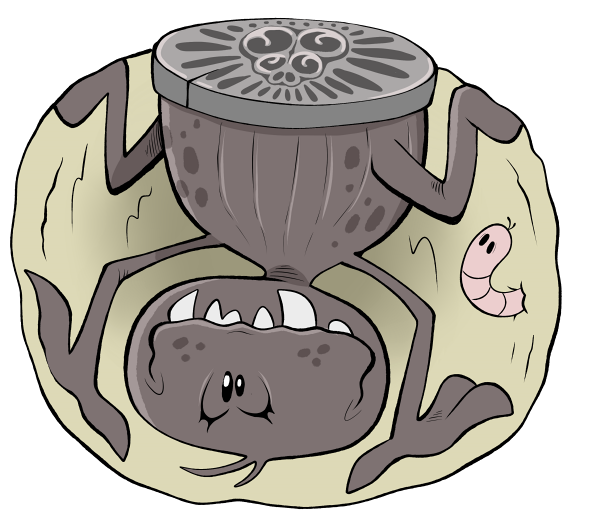 There are actually several different spider groups referred to as "trapdoor spiders," but most of them are Mygalomorphs, just like tarantulas, and even a few tarantulas themselves are trapdoor builders! These spiders are so named because they conceal themselves in a vertical burrow and cover the entryway with a thick, rounded pad of silk, anchored in place on just one side and usually coated in a fine layer of sand, soil or other bits of debris to blend it flawlessly in with the surrounding terrain.

Fanning out from the doorway are many finer strands of silk, and just like a traditional spider web, the spider can read the vibration of these strands to determine if a suitable prey item is approaching her front door, bursting forth to drag it into her den in the blink of an eye! You can watch a video compilation of this HERE!

Most trapdoor spiders live in the same basic setup, but there are a few different defensive strategies they may employ in case their hidden entrance is discovered by one of their own predators. Some merely construct more than one entryway, giving them an alternate escape route. Others cleverly add an additional "escape room" in their tunnel with a second trapdoor of its own, so anything opening the first door sees what appears to be an empty burrow. The most unusual by far, however, may be Cyclocosmia truncata, the subject of today's illustration. In this spider, the end of the abdomen itself has evolved into a thickly armored, perfectly flattened "plug," smoothly ridged to deflect enemy weaponry and sharply bristled around its outer edge. When the spider senses danger, she only needs to flip herself around and jam her tunnel with her specialized butt-shield, switching from her usual attack-ready posture to defense mode.

Trapdoor spiders will typically live their entire lives in the same burrow if they can help it, and the oldest ever recorded, Number 16, passed away only recently at the age of at least 43, having been discovered in 1974 in the same exact burrow that became her grave.