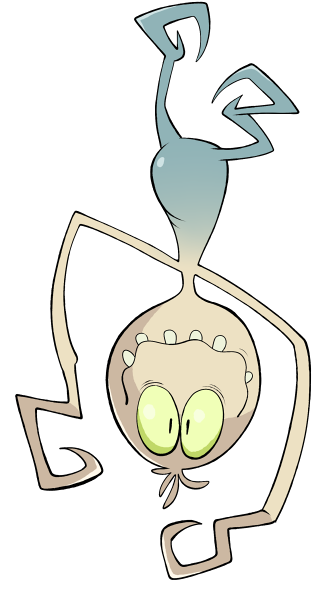 How rad is that name!? "Troglo" of course refers to cave-dwelling creatures and "raptor" means "to seize," which we almost always use to denote creatures who seize prey via talons or claws of some sort, so it wouldn't be far off to call them "cave claw spiders," if they must have a common name, but TROGLORAPTOR serves just fine.

Trogloraptor marchingtoni was discovered in only 2010 in Southwest Oregon (our own state!) and was so unique, an entirely new genus and even family had to be created for this single species, making it one of only three new spider families discovered between 1990 and the 2010's. Its respiratory system is unusual enough that it may have diverged from other spiders as far back as 130,000,000 years, and only a single juvenile has ever been found outside of a cave, in the leaf litter of a California redwood forest. It's entirely possible that this specimen was actually a different, but very similar species, and that other members of the family could be hidden deep in other caves around the Pacific Northwest.

Trogloraptor are so named because, while not easy to see with the naked eye, their tarsi - their "feet" - are uniquely sharp, barbed and hook-shaped. Dangling upside-down from cave roofs by only a few strands of silk, the spiders hold out their front legs in wait for passing prey...but what they eat remains unknown. Captive specimens were offered various prey items including crickets, moths, and even other spiders, but ignored all of them until they actually starved to death. Could this mean that they were simply that sensitive to a non-cave environment, or do they only feed on a highly specific kind of prey in their natural habitat? If so, what insect could be common enough in their home caves to sustain them, while rejecting every other possible food source??