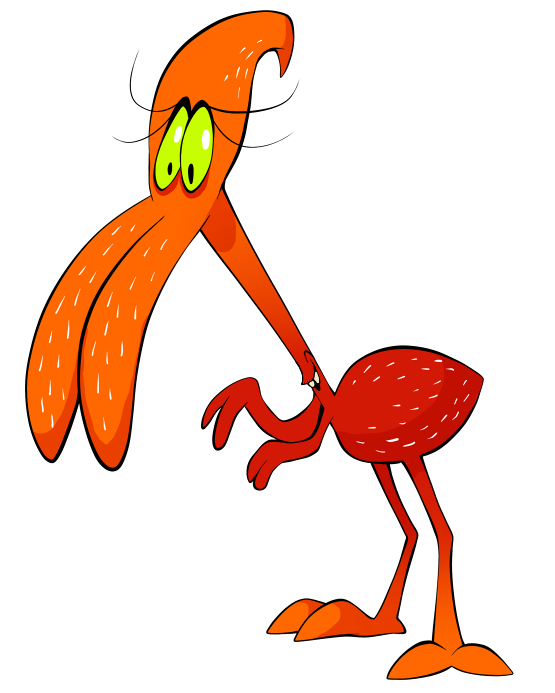 Today's spiders, the Archaeidae, are among the strangest looking of all spider families and easily one of my top few favorites. They were actually discovered first in fossil amber, and assumed to be long extinct until the first living specimen was found in Madagascar some forty years later, in 1881. Now known from Madagascar, Australia, South Africa, and a sister family in New Zealand, they tend to inhabit deep, dark forests while a few species are known exclusively from cave systems, and almost none reach more than eight measly millimeters in length.

Pelican Spiders are are unique among virtually all spiders for a cephalothorax that stretches upwards into a long "neck," atop which are situated the eyes and a set of chelicerae so long that they usually reach the ground, though the pedipalps and the tiny mouth opening are still all the way down at the bottom of the "neck," or right where they normally go on any other spider!

Why this set-up? Also known as "Assassin Spiders," this is yet another group that feeds primarily upon other spiders, but has taken much more extreme measures to protect itself from such dangerous game. With its exceptionally sensitive front legs, an assassin spider constantly feels around itself as it wanders, searching for a single line of silk stretched along the ground. This is usually the "drag line" other spiders leave behind them as they travel, a safety measure that keeps them anchored to the ground at all times.

Once it finds this lifeline, the assassin follows it. How does it know which direction to go? If I had to guess myself, I'd say the line might have a "fresher" chemical taste or odor in the direction of its spider, but by whatever means, the assassin at least chooses the right way with enough frequency to feed itself.

Upon reaching its target, the assassin wields those massively long jaws like a set of barbeque tongs, their inner surface lined with tiny "teeth" to provide an almost inescapable grip. Their extreme length makes it impossible for most spiders to reach the attacker and bite back, even if the jaws have only grasped it by a single leg, and they are held out this way for several minutes as they succumb to pelican venom. I had an excuse to use those two words together, and I took it.

Oddly, as the prey enters its most desperate death throes, every assassin spider seems to let go one of its fangs and lower it back down, now holding the prey out on just a single skewer. Nobody knows why they do this, exactly, but it may be as simple as conserving their energy, or perhaps that as their prey begins to flail for the last time, it's wiser to leave as few appendages as possible in harm's way. Only when the other spider ceases all movement does the pelican finally swing its other jaw back down, bringing the meal right to that teeny, tiny little mouth. You can read about all this in even more detail, and loads more photos, right here on naturalist Paul Bertner's blog!