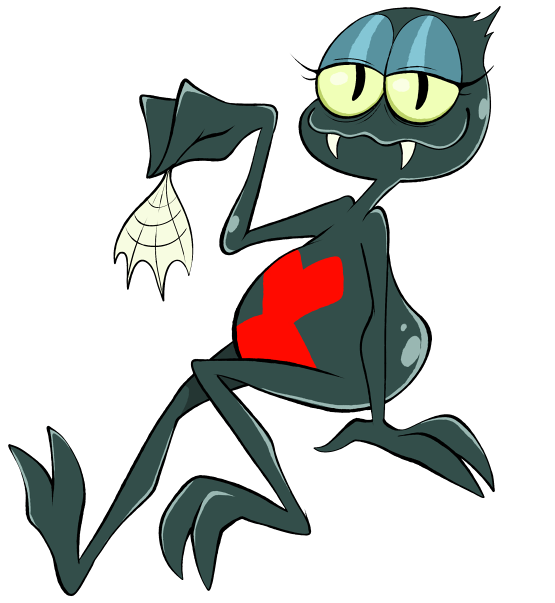 Today, we finally talk about a dangerous spider! The widows, or genus Latrodectus, may be the most iconic spiders in the world, famous for allegedly having the deadliest, most venomous bite of any kind of spider and for the female's supposed habit of killing and eating her mate, so much so that even though we originally named them "black widows" after the black attire of actual, human widows, the term "black widow" in turn came to refer to women who have murdered their husbands.

As is so often the case, however, popular culture has exaggerated a few points here. First, typical widow spiders almost never cannibalize males under natural circumstances. As is also the case for preying mantids, almost all instances of mate cannibalism among the "classic" black and red widow spiders occurred in captivity, under heavy observation, and were most likely induced by stress. In these spiders, "mate cannibalism has never been observed in the wild."

As a matter of fact, a black widow male in the wild will often live long enough to "clean up" the female's web after mating, or rather, he will tear down a bunch of her webbing, wrap it up, and throw it away, which seems to discourage additional males from showing up after him. The female tends to tolerate this, and it may be because any further suitors would be a nuisance to her anyway.

In those Latrodectus that actually do consume the male, such as the Australian Redbacks, it's not a matter of the female "killing" her mate as her mate willfully sacrificing himself. Once his purpose is complete, he actually presses himself into her fangs, leaving her no choice but to envenomate and consume him. This final act ensures that she will have enough nutrients to care for his young.

This leaves us with the widow's other claim to fame, a bite that will supposedly kill you dead, and a great deal of media tends to assume that just one nip from this tiny spider is an almost guaranteed death sentence.

One thing is fairly certain: it's not fun. At best, a widow bite can be incredibly painful. At worst, you may be in for positively excrutiating pain, nausea, vomiting, fever, dizziness, chills, aching, breathing difficulty and skyrocketing blood pressure...before you drop dead, right?

You should almost certainly seek medical attention if you're bitten by any Latrodectus, but the likelihood of death is considered so low in a healthy adult that antivenin, itself carrying a small risk of anaphylaxis, is typically reserved for only the most worrying cases, and treatment will more often focus only on pain relief. Like we established though, you're liable to really want that pain relief, and could probably use a little ER visit to monitor your vitals and make sure things don't get any worse.

Assuming you get bitten out in the woods one day and can't get yourself to a hospital, however, your odds of survival are still pretty high. It's only infants, the elderly and the sick who are considered at risk, and even so, only a handful of people have in fact ever gone on record dying from the venom of this genus.

There's even better news, too; perhaps because most animals know not to push it, widow spiders are naturally docile, lazy spiders who are reluctant to even bite at all, according to a study in which a series of widows were manhandled by artificial fingers. What we found was that a widow will almost always try to run away or "flick silk" when prodded at, and even a widow grabbed and squeezed will often resist biting. When she's finally had enough - or the attacker simply forces her fangs into their own skin - she's still more inclined to administer a "dry" bite than an injection of venom.

This is actually common to a number of venomous creatures, including snakes, because the bite alone is often painful or startling enough to discourage their attacker, and wasting venom can be far more dangerous to them in the long run, expending precious nutrients they may never get back if they've used them on something far too big for them to eat!

The bottom line is, a black widow isn't something that you want to mess around with, but they'll leave you alone if you leave them alone, and in the freak chance that you DO get bit, there's no need to panic. Get help as soon as you can, but don't waste any time picking out your funeral music.