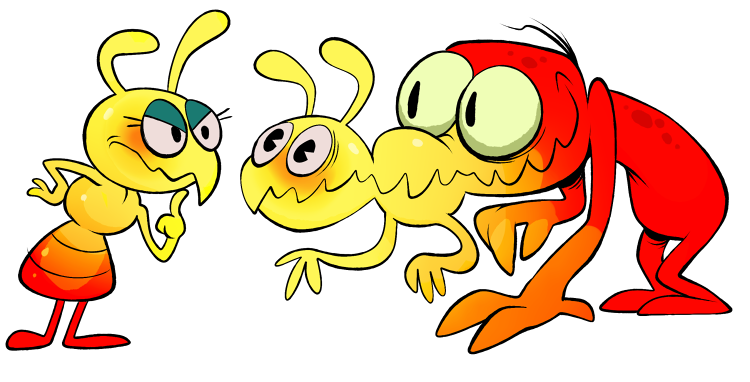 Yesterday, we touched on the fact that a remarkable number of jumping spiders imitate other creatures, and that ants are the most common subject, with good reason: ants are practically the ultimate terror of all other arthropods and therefore the majority of all animal life on Earth, so that even a single ant is often avoided by predators who would rather not attract the attention of its sisters. An ant is therefore even scarier to many other creatures than a spider, including spiders themselves, and the resemblance offers a jumping spider excellent protection.

Perhaps one of the single most amazing examples of this lifestyle is Myrmarachne plataleoides. This spider imitates the weaver ant Oecophylla smaragdina, which constructs large, hanging nests from the silk of its own larvae and will defend these nests with a notorious degree of aggression. The spider almost never preys upon the ants themselves or ever gets too close to the colony, but lives just close enough that its own potential predators wouldn't know the difference.

The female plataleoides is typical of the more sophisticated ant mimics; her cephalothorax and abdomen are stretched and pinches into the shape of an insect's three body segments, two of her eyes are positioned to resemble those of the weaver ant, and two of her legs are held in the position of the ant's antennae. [PHOTO HERE.]

The male, on the other hand, is a very different creature. The forms taken by many male animals are dictated by female tastes, and in these spiders, the females have naturally selected for males with the largest possible chelicerae, now used not only to impress the ladies but to fight off rival males.

These appendages have become so large that they should actually break the illusion of a false ant, but as the female spiders bred them for bigger and bigger jaws, equal pressure from the weaver ants molded these jaws into an extended part of the creature's disguise. Now, the jaws flare out into what very strongly resembles the head of an ant themselves, complete with its own false eyes, and the result is a spider shaped like two weaver ants; one being carried around in the jaws of the other.

When the spider needs to feed, the entire first "ant" splits all the way down the middle, and the spider's fangs flip into attack position like a pair of giant switchblades. To another ant, this would probably be pretty terrifying...but ants, like we said, are very very scary creatures. Our spider may be an amazing facsimile of a real ant, but it would still prefer not to tangle with the ants themselves, preying on almost anything but a real weaver ant as it sneaks around their territory. We think of spiders as some of the most fearsome of all predators, but many of them just want to be left alone as much as possible, and some will go so far as to hide among the very things that they find scariest of all.