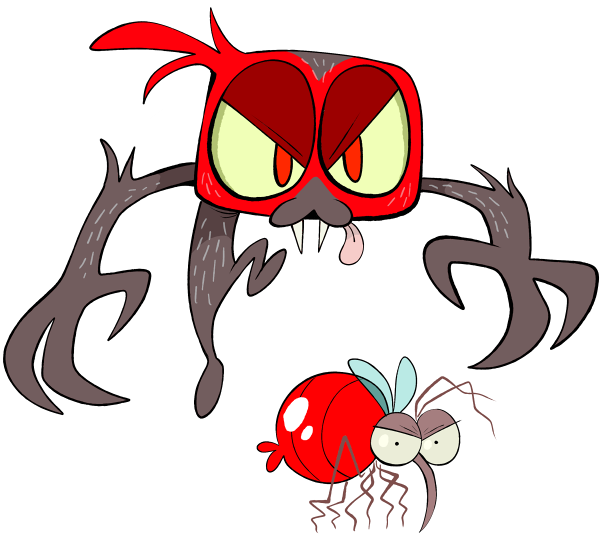 Maybe this spider would be the most appropriate for October 31st, but I have something a little less obvious in mind. Evarcha culicivora is nonetheless pretty spooky, with a vivid red "mask" and a dietary preference unheard of among any other spider - HUMAN BLOOD!

Trouble is, culicivora's mouth parts are no different from those of any other spider; the same blunt, venomous fangs and tiny, jawless hole of a mouth. It's equipment for eating other arthropods, not people! There's only one way for this spider to satisfy its unusual craving, and that's by preying primarily upon Anopheles gambiae, the same species of mosquito responsible for the spread of malaria in the spider's natural habitat near Lake Victoria.

Culicivora can feed on any mosquito if need be, but given the choice between one with an empty stomach and one swollen with blood, it chooses the blood-filled insect more than 90% of the time, and it has more than one way to identify which is which.

Jumping spiders are primarily visual predators, and by sight alone, they can often tell which mosquito is still digesting a meal from the fact that the insect will stand at a different angle if weighed down by the blood. When cut off from visual cues, however, specimens had no difficulty tracking down the meal with the extra-juicy center, proving that this spider must also have an acute sense of smell. In fact, it seems that culicivora will also follow our very own body odor, hunting in the vicinity of humans or other large mammals where their preferred prey is most likely to turn up.