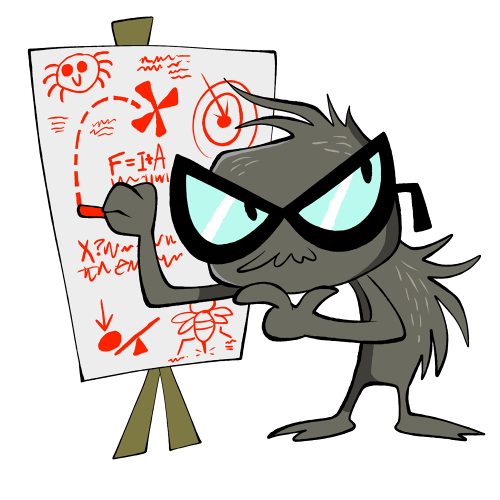 This entry written by Rev Storm!

The idea that some creatures are ever "more evolved" than other creatures is generally a misunderstanding of how evolution works, but if we could argue that any spider is the "most sophisticated," it may very well be a tiny little genus of jumping spiders which, like several genera we've looked at, has evolved to prey primarily on other spiders.

A member of the genus Portia has exquisite eyesight, even among jumping spiders. More than that, however, it is extremely intelligent. Combining both these abilities, the spider pursues its prey - web-building spiders. From only looking, Portia can puzzle out a path that will take it all the way from wherever it is now to the edge of its target 's web. This is no small feat. Consider not only how immense a tree would be at that scale, but how many branches it has. Now consider how the branches entangle with the branches of other trees. Keep in mind that unlike a path a human would traverse, this is not a problem limited to two dimensions, as the spider must also find its way up and down the tree. Also remember that we're operating on a short timescale here, trying to reach the goal before daylight fades - not just for the sake of seeing, but because as the temperature lowers it will become more and more difficult to move, even with the jumping spider's fur coat.

Of course, no convenient route may exist. In that case, the spider must find the best place to rappel down to its victim by a length of thread, catching it unawares.

And it manages this, again and again, day after day!

That alone is impressive, but it doesn't stop there. Unlike many small arthropods, Portia spiders do not specialize. This means that they cannot rely on instinct alone to ferret out their cautious prey, who themselves are finely attuned to the behavior of their own prey. Web-building spiders depend on their web as an extension of themselves to sense the world around them. The way the threads vibrate will let them know if they've caught a meal, or are under siege by something that will make a meal of them.

Luckily for Portia, the prey must also mate, and each species of web-making spider has its own special "mating code," a series of vibrations for the male to pluck out on the web as though it were a massive harp, to let the female know she has a gentleman caller.

Through trial and error, Portia must crack this code. If the web's inhabitant responds to any movement, Portia knows it's on the right track. Nonetheless, this process can take hours, if it succeeds at all. And if the next spider Portia preys on is a different species, it'll have to figure it out all over again. It's a spider that "hacks the password" of other spiders.

Luckily, Portia has one more trick up its little sleeves. Unlike Portia itself, web weavers have terrible sight. To that end, Portia can simply curl up in the web and pretend to be a bit of debris that the wind blew in. When the owner comes down to clear it out (an immaculate web is an unseen web), Portia strikes.

These may not even be the Portia's only special techniques; they are only what we humans have observed and understood in our limited research of the genus. Who knows what else these genius hunters may have learned to do, and why, whether it's to eat or to avoid being eaten.