At a casual glance, you might surmise that a show like "Casper's Scare School" is little more than a cheap effort to inject fresh relevance into a cartoon character all but forgotten by many of today's children; just another computer-animated update to something that nobody was really clamoring for, another predictable cartoon about the public education of non-human entities and probably another saccharine, forgettable affair to anyone over preschool age.

And you know what? You are damn wrong. Shut up, jerkface.

We watched the Casper's Scare School pilot movie on a whim, and then we bought the entirety of Season 1 on Amazon, and then we watched virtually all of it in one sitting. At no point during this sequence of events did I feel as though anyone in the production team ever ceased to have fun or stop caring, from moments of insidiously clever dialog to the endless stream of monster gags and horror shout-outs that never feel shoehorned. Blob kid hates the cold. Wolfie is superstitious about the moon ("What do we really know about moonlight? That's right! NOTHING!") and the obligatory fashion-conscious cheerleaders are a pair of skeletons in Dia de los Muertos makeup. One of the funnier running gags is their gross misunderstanding of human biology and treatment of our kind as weird, creepy animals. ("It's probably just lost! Let's just catch it and release it in its natural habitat, like a mall or a softball game")

An especially great thing about this series is how even the most minor background creatures can be given their time to shine. Intrigued by the screeching harpy kid? The pumpkin-headed scarecrow child? Don't worry; chances are high that you'll learn a lot more about them sooner or later. No matter how little we see of them the rest of the show, you never know who might even hog the spotlight from Casper and his friends for a whole episode, as is the case for season one's The Reflesherator.

I know, I'm predictable. I know some of you are rolling your eyes. You might have guessed this would be about the Fly Kid by the very first image on this page. I don't care. I challenge anybody to look at "Fly boy" and tell me he's not already the cutest thing you have ever seen in the history of ever, even before I've told you about the time he got stuck in a window "again," or the time he had to be rescued from uncontrollably circling a lamp, or his horrible nightmares about giant, sticky strips of paper, or when we could see him just standing around all alone at the school dance.

In fact, the only thing that could ever possibly be cuter than Flyboy himself is Flyboy's horribly nearsighted father, Professor Buzz Maggoty or just Mr. Maggoty. We're introduced to him here as a substitute science teacher, embarrassing his son with his laughable crazy-talk about humans having things like "circulatory systems" and "hearts" instead of "fear juice" pumped by "metal tubes." He even corrects his son that they're known as human beings, not "fleshies." Buzz seems to have quite an interest in these odd, four-limbed primates...but why?

As you may have guessed, Fly Boy and his father weren't always huge, mutant arthropods at all. Like their Hollywood inspirations, they were once human beings, until Buzz accidentally transformed them into the monsters they are today...apparently when an ordinary housefly got stuck in his experimental super-ointment.

Ever since, the Professor has made it his life's goal to reverse this transformation and return with his son to the human world, having spent many years developing a machine he calls The Reflesherator, which he believes will undo their mutation once and for all. There's just one problem...

Fly Boy doesn't want to be a human again. In fact, he has no memory of ever being anything but a fly, implying that the accident may have happened in his infancy, the lucky bastard. Despite his protests, his father is insistent that he simply doesn't know any better, and that they'll both be much happier when they're "cured" of their "affliction." Interestingly, he mentions during this conversation that they live in a part of Underworld called "Flyville." Who else lives there? Are they all humans transformed into flies through various scientific mishaps? Or is there a population of "natural" fly people we're never shown?

In an effort to change his father's mind, Fly Boy convinces him to spend some father-son bonding time the way only huge, winged, sapient insects can, from a rancid garbage feast to upside-down ceiling tennis. Unfortunately, a run-in with actual giant flypaper kills their buzz, so to speak, and convinces the professor more than ever that Dipteran life is no life for a single father and his boy.

His hopes dashed, Fly Boy finally confides in Casper the friendly Doormat that he loves his chitinous, unnatural life the way it is, he loves going to Scare School in the Underworld and he loves his monster friends, but he still loves his dad more than anything else. He wants to make him happy, and if it at least means they might spend even more time together, he's resigned himself to leaving behind everything he knows.

It sure is dusty on this internet.

The climax of the story comes rather abruptly; just when Fly Boy has volunteered to enter the machine first, Casper deduces that it's still highly unstable and equally likely to paint the walls in bug guts. For the first time, Casper's incessant meddling in other people's lives finally prevents a father from having to watch his child violently explode at his own hands. Way to go, dead kid, I guess.

Realizing his obsession could have cost them their lives, Buzz finally listens to his son's feelings, and realizes, as we all do, that life as a hairless ape in the suburbs has no real advantages over life as a feces-eating insect. In fact, it doesn't matter what they are or where they live at all; as long as he can still be a father to his son, their lives are perfect.

This dust, I swear.

...And maybe it doesn't try as hard to be emotional, and maybe it's not as groundbreaking on a technical level, but I'm pretty sure this series is uncontested as my very favorite computer-generated animated work in which a secret civilization of monsters built their entire culture on scaring people. Sorry, Pixworx. I said it, and I ain't gonna un-say it neither. 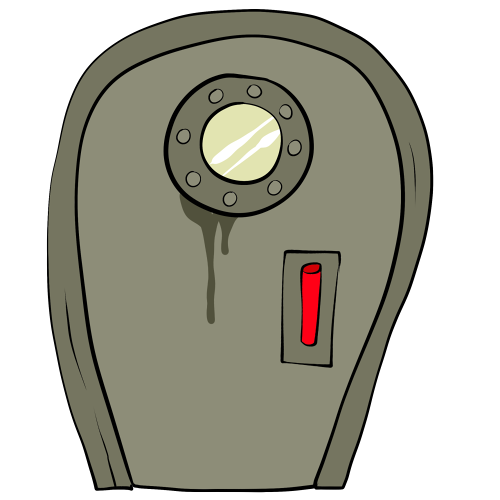