The Tingler is an easy contender for one of the strangest cinematic monsters of all time. As explained by the dashing Doctor Warren Chapin (Vincent Price), that "tingling" you feel down your spine when you're frightened is the result of a parasite. A parasite nourished by fear, but destroyed by loud noises - such as screaming. The star Tingler of the film, however, developed in the body of a deaf and mute woman, growing unnaturally massive until she was literally scared to death. It feels like the kind of horror story a small child might come up with, completely unrestrained by your buzz-killing "logic" or "sense," and it is darling. The film is also made famous by director William Castle's love of interactive gimmicks, originally rigging random theater seats to electrically shock members of the audience during the Tingler's rampage! 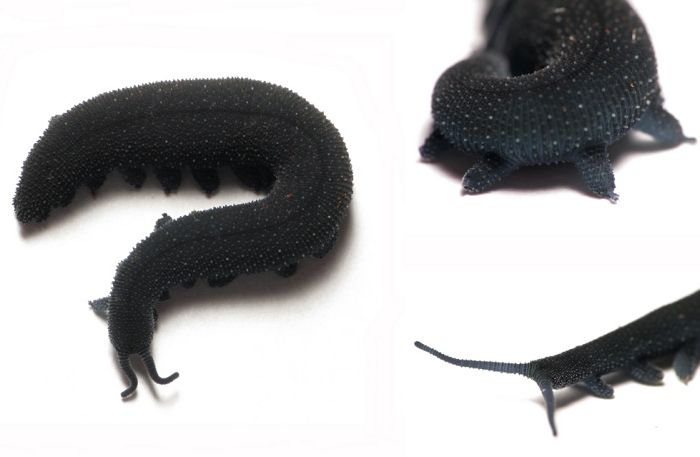 
One thing that has always immediately stood out to me about the little sweetie is its remarkable similarity to an Onycophoran or "velvet worm", to such an extent that I'm inclined to believe it was directly inspired by the creatures, though the odds that anyone involved really saw any images of this still obscure, poorly studied phylum feel slim. Bizarrely, the Tingler was first described to me - in a children's book about horror movie history - as, and I quote, a "giant, spider-like creature," which was rather confusing when I at last found images from the film some years later. "Spiders, worms, whatever. Leggy critters."

If you're getting a vague sense of deja-vu yet, it's because I've said virtually all of the above once before, on a now-defunct blog all the way back in 2010, and there is a valid reason why I'm dredging it back up from limbo. In the same post, I briefly lamented having completely missed out on a Tingler replica produced in a highly limited run by the also-defunct resin model company, Ultratumba productions. Now, years later, an Amazon seller has released just a handful of the little guys back into circulation, and I'm proud to say that I not only acquired one of my own at long last, but I paid for it with part of an Amazon gift card I was given by a biology professor as payment for drawing a planarian. Am I living the high life, or what?

Ultratumba's Tingler is much larger and heftier than my photographs probably communicate, nearly two feet long and made of a semi-flexible resin that could probably survive a drop of a few feet, but I'm not about to test that. Ultratumba productions, which also produced refrigerator magnets of The Flesh Eaters, seems to have completely dissolved in 2009, and none of these beautiful statues will likely ever be manufactured again - nor will replacement rubber tentacles for my poor Flesh Eater magnets. I don't even know how those broke off, they were just off one day. I can probably blame the little tongue-fingered guy from the fridge. I know he's the one bending all the spoons at night.

The Tingler in the film appears extremely dark, like it would probably be almost black, but I love the model's pale, bony color scheme, especially the pink connective tissues and sickly, greenish blotches. It actually looks like it formed directly from the tissues of its host's spinal column! You can also see how two of the legs are fused, which provides the perfect means of hanging the whole thing on a sturdy nail.

My only critique - and I feel really bad critiqueing this at all - is the Tingler's little face. It is an adorable little face, like some grumpy and miserable prehistoric salamander, but I'm 99% certain that the movie Tingler just didn't have one at all, and I'm inclined to lean a little more towards a less anthropomorphic, more worm-like interpretation. I suppose, however, that the Tingler might indeed grow right from human tissues like some sort of elaborate, ambulatory cancer, and if you're familiar with those, it makes sense that one would borrow some basal vertebrate characteristics from its host. If you're not familiar with those, chances are high that you're going to be soon enough. Sorry, I couldn't switch the thing off. You know the one I mean! Don't lie to me.