Last time, we all had a laugh at the expense of Cthulhu and pondered the horrors of ghostly reproduction. Now, it's time for even more treasures from the ecto-containment unit! Episode: A Ghost Grows in Brooklyn


One of the only plant-based spirits we ever get to see, it's still one of the coolest and most memorable one-offs in the series, one that really stayed with from the moment I saw it. The gnarled body really looks like plant matter trying to form a humanoid, the beady-eyed cactus head has a lot of personality and those jaws, while probably meant to invoke a fly-trap, seem more like they were transplanted off a devilfish. Is this the ghost of a plant, or of somebody who liked plants? Hated plants? Was killed by plants? It ultimately possesses an ordinary geranium, but rather than animating it into some sort of monster, simply grows it to destructively massive proportions. 
When a family of trolls believe some of their members have been captured by humans, they launch an attack via their allies, the "fire flies." The creatures actually look more like birds, though their glassy, close-set eyes and tubular mouths definitely have a more insectile feel. When the "flies" are doused with water, we really get to see how bird-like they are, albeit pathetically scraggly, withered and bald, their flames apparently serving as their "feathers," to the extent that without their fire, they can't even fly! Episode: Beneath These Streets


I know the blue thing with the extra body fused to its scalp is probably the most impressive thing in this shot and the guy with the eye stalks is really fun as well, but come on, give it up for that fat, limbless torso with three tiny, identical, screaming, tricloptic, sludge-mouthed heads on it. It's almost like a completely different ghost was being designed here, maybe with just one three-eyed ooze face, and our lovable artist thought "nahhh, let's give it three little tiny ones." It's that kind of snap thinking we could all use more of in our lives. 
Shown for only one single shot, this is definitely one of the most whimsical and goofy designs in the series, puffing steam from its happy, cartoon dragon mouth and chimney nose, nonsensically hand-cranking its own wheels with its little arms while its hind legs do the driving. Doesn't that all take a little more energy than just running? I guess it doesn't matter when you're dead. A dead what, I have no idea. 
Another minor ghost already getting busted when the episode begins, this guy has a lot of classic cartoon monster features, with eyes on stalks, a trunk, jagged teeth, an odd number of limbs, spikes down its back and a protruding tongue, basically hitting all those buttons that make a good old fashioned childhood closet-dweller. I always wondered, though, what was up with the end of its nose. What is that thing? It looks like someone stabbed a spork into its snout. It's just such a tiny detail that doesn't really call anything to mind, I can't help but fixate on it. Three-legs even got a new, updated drawing in the ending credits of Extreme Ghostbusters, a show we'll also be revisiting soon, and this concept art is just gorgeous. I wish we had seen hopper in the show itself, which, while an incredibly good series, didn't have nearly as many "secondary" ghosts as this one. 
Nicknamed by Peter, this is one of a couple ghosts seen in a Slimer-centric later episode. The show would, unfortunately, degrade pretty badly in overall quality as it got on in seasons, caving to the demands of network executives who infamously wanted more Slimer as well as more sexism. It was a sad state of affairs, but we're only here to talk ghosts, and those, at least, remained weird and inventive to the end.

"Double Bubble" is ostensibly defined by having two heads, but the heads themselves are so bizarre and alien, the fact that there's two of them is really the last thing that stands out. I love the left head (our left) the most, with the vertical mouth that just ends at bulging garfield-eyes. The monster's tail end is also pretty interesting, branching into three segmented, sucker-tipped tendrils! 
This thing is momentarily seen inside the containment unit, and attempts to catch Slimer in its tendrils on one of the green guy's many excursions into the unit. Why do they keep sending him in there? Doesn't he suffer enough?

We know nothing about this entity, except that it appears as a HUGE sphere of writhing, black tentacles. Is there anything inside? When did they bust this thing? Did they bust this thing? Back when I first saw this episode in my childhood, I got the strange impression that it might not even really be a "captured ghost," but maybe something that formed within the containment unit. I'm not sure why, exactly, I had that thought at the time, given that this isn't really much weirder than anything else in the show, but I still really like the idea. 
Another of those minor episode-opening ghosts, this thing is interesting in that it has a kind of merman-like shape, but all its details are those of an arthropod, with pincer-tipped arms and a spiny maggot-like tail. I was going to say it doesn't make thematic sense for a grubworm-looking ghost to be haunting an airport - at one point trying to fly a model plane and adorably parachuting out of it - but maybe its form is some kind of symbolic, ironic thing. Most insect larvae metamorphose into flying creatures, right? Maybe it longed to fly in life, but it never got the chance? 
Sharing its moment with the steam ghost, this naked, emaciated and armless goblin-man similarly drives himself around with his legs, but his gaping mouth houses an inorganic-looking wheel lined with at least nine flapping, human-like tongues. It's hilarious, but probably not when it's dancing around your room at night, trailing saliva up and down your sleeping body, because what else would anything that looks like this ever exist to do? 
This is a very cool design, with a worm-like midsection, an amphibian muzzle and oblong, mirror-like eyes that actually do exist in some deep ocean barreleye fish, though more than anything else, viewers are sure to be smitten with how damned adorable they make this one, between the dainty little lashes and how delighted it seems to just be doing whatever it is it thinks it's doing, screwing around at a steelworks among vats of molten metal...until it falls into one, and appears to dissolve before it can be properly trapped. This becomes the hook for the entire episode, as the ghost-infused steel is forged into a number of different objects which subsequently animate, seek out one another, and attempt to construct a new, more powerful form. Immune to proton blasts, it even just forms into a slightly different shape every time it gets destroyed, and the cute little ghost is only released when the metal is finally recollected and melted back down again. 
This is another one from the later seasons, when the writing and animation both took a bit of a dive. The thing about this clawed, squid-like demon is that it's supposed to be a manifestation of the combined anger of every single ghost in the Ghostbuster's containment unit. You know, the containment unit where they've got innumerable goblins, imps, dead people, elementals, genies, poltergeists and even literal gods locked up.

Shouldn't their entire collective bitterness be kind of a bigger deal than...well, this? Sure, it's cool looking and fearsome, but given the concept, I'd expect some sort of world-destroying, mind-bending, city-sized demonic horror. Instead, this slightly large mollusk wreaks fairly conventional havoc around town, and at one point just lets all the air out of the ghostbuster's tires. And adding insult to injury, the squid ghost's unusual blue slime is distinguished by its habit of constantly laughing. Come on, squiddy, there's being a sentient embodiment of hatred and then there's just being a petty dick. In fact, that's kind of all the squid ghost ever amounts to, and in retrospect, that's pretty hilarious. Maybe the denizens of the containment unit just aren't all that angry. Maybe it's kind of like a chill party in there most of the time and the squid ghost is more of a "gentle ribbing" than a doomsday revenge plot. 
Actually not a ghost, this entity appears in the fan-favorite Sandman episode, in which the titular spirit uses advanced sleep-dust to place humans in a five-hundred-year slumber and bring their dreams to life. The first such dream is based on an old science fiction comic read by the Sandman's first on-screen victim, and the alien's design really feels ripped from the cover of "Weird Tales" or "Fantastic Stories." In action, its pulpy organic body squishes beautifully around in its egg-shaped suit. 
A large number of creatures throughout the series only ever appeared in group shots, and the only way we're going to avoid total chaos here is if we tackle every such shot as a single "entry" and just focus in on my favorites. Here, we have what happens when the Sandman gets pissed off and turns the various dream-beings into nightmare-beings. This implies that the tentacled brain alien was one of the "good" dreams, just as I would have expected.

This humanoid is easy to write off, until you take a closer look and realize its head is a fish. What's more, it has Frankensteinian neck bolts. As a nightmare manifestation, we don't have to wonder why this one exists or whose ghost it is, we already know dream creatures get pretty wild.

You know I like monsters based on garbage, and this killer trash can is a nice one, with its radial anatomy and insect-like antennae. You can also find that it runs around on nothing but one pair of cute little legs!

This ribbon-like worm is a relatively believable organism compared to some of these goofs. I could almost buy it as a cambrian sea creature, a sort of blend of a sea scorpion, odontogrithis, and opabinia.

The creepiest creature present is probably this colorful, cartoonish clown face, with nothing but a fleshy, tapering, featureless body. This is much more in line with the sorts of things a lot of people actually do tend to dream about.

My favorite of the nightmare monsters is probably one of the plainest, but there's a lot of odd characteristics to love about it. Its huge, pupil-less, close-set eyes look straight from an abyssal sea creature, it walks on the two "lobes" of its bulging stomach as if they're a set of legs, and its fleshy mouth constantly changes shape, jawless and toothless!

Despite the fact that the dream manifestations are not real spirits and only dematerialize when blasted, several of their designs were recycled for some scenes within the ecto-containment unit during a Ch//%$*---mas special, whatever the hell I just said, and there's the Slug family, too! These shots at least give us some nice new looks at some of these designs. We can appreciate Frankenfish even better in this cameo. I'm especially glad we get one more glimpse of that god-awful clown thing, too, which actually looks quite literally like a piece of shit, the only thing that could have possibly made it more horrible. What poor schmuck was defecating clowns in their dreams? I'd really sooner just not sleep. 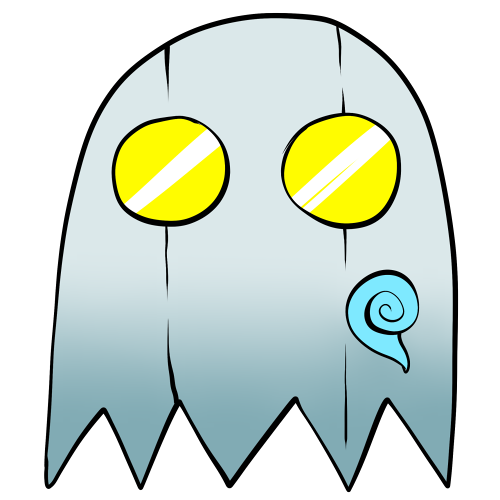