So having reviewed two creepy toy lines already, I remembered another one that I've really meant to review for years now, and wouldn't you know it, the "Bad Eggz Bunch" was released by Vivid toys. The same distributors behind Pocket Shockers and Fungus Amungus. We've got a whole Vivid Toys Trilogy here now...and not only are the Bad Eggz the oldest of the three - releasing in 1992 - but they're also the very rarest. So rare that just one of these tiny, unpainted rubber figures can fetch more than a hundred dollars on the collector's market, and a Bad Egg mint in package is hypothetically damn near priceless, considering the eggs were just as fragile as the real thing and seldom survived shipment or storage for long. Dang.

There were over twenty characters to collect, and they were given no apparent background story or individual characteristics, but what they did have going for them were extremely detailed sculpts and grotesque, sometimes terrifying designs. All we know about these creatures? According to a package blurb, they were "buried beneath the earth's surface for ten million yaears" before an Earthquake "freed them from their time warp." Okay. So are they from underground or from a time warp? And how did they end up inside eggs? I guess we'll never know, but more than twenty years after their release, we're going to briefly review every one of them.

Enjoy this, because you more than likely can't afford to experience these things any other way. 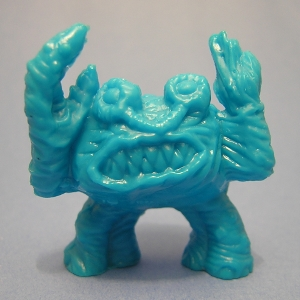 EGGFACE:
Eggface, for whatever reason, always felt to me like the poster child of this line. Maybe it's just the easiest one for me to remember. What makes Eggface interesting is that it looks so much like a crab at first glance, but its legs are like an elephant's and it has wrinkled flesh instead of an exoskeleton. It's a vertebrate monster that just happens to be kind of crab-like. 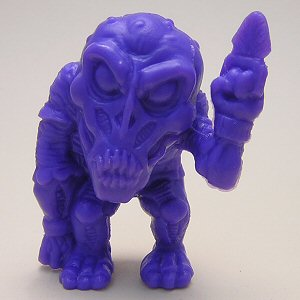 VERTEBREGG:
I'm not sure if "being a vertebrate" is really the most name-worthy characteristic of a skinless, dagger-wielding, fanged humanoid with an outrageously huge face. It's easily one of the scariest designs in the line, like an inside-out baboon painted by Giger. 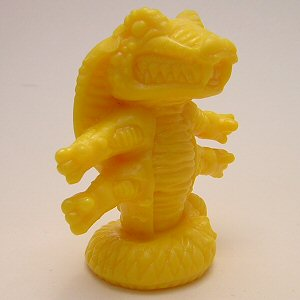 DEVILED EGG:
So this one is a "devil" pun, but the design is a monstrous snake. That's significantly more biblical than I was expecting from something called "Bad Eggz Bunch," I gotta say. 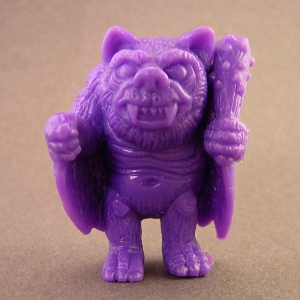 BATEGG:
I really like the shades of caveman and werewolf in this bat creature. Most bat creatures opt for gothic elegance, but this one is a shaggy brute who bludgeons things to death with a club. 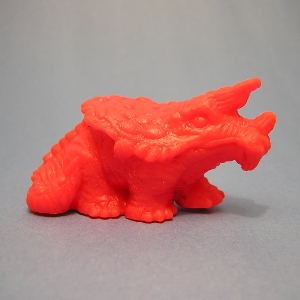 EGGASAURUS:
Surprisingly, the sole dinosaur in a line of monster toys winds up being an herbivore, rather than the rabidly popular Tyrannosaurus, and in fact the least horror-leaning of all the Bad Eggz. I enjoy the goofy proportions of this thing, most of its little lizardy body covered in the protective crest of its oversized cranium. It's nothing like a real ceratopsian, but it shouldn't be. 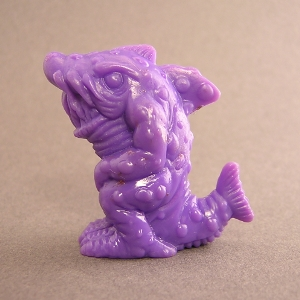 ZYGOSHARK:
I'm a pretty big fan of walking sharks, especially when they're presented to me as sickly, warty mutants that emerged from a weird egg full of slime. Zygoshark truly looks like an unnatural spawn of toxic waste. 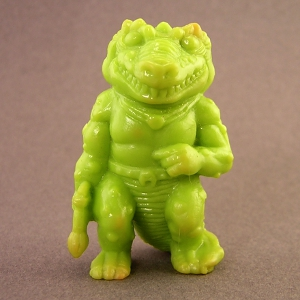 BEATER BEAST:
Once you get tired of laughing at its name, Beater Beast is a pretty cool little lizardman, with a crocodilian grin and a nondescript weapon that may be anything from an egg beater to a blaster pistol. What I appreciate most about Beater, however, is that it's not sculpted in a battle pose. Most toy lines treat that as almost an obligation, especially when a character is wielding a weapon, but Beater looks more like he's just curious. Beater is an ask first, beat later kind of beast. 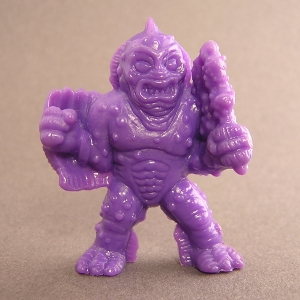 EGG CRUSHER:
Another club-wielding brute, but this time, it's looks like a cross between Kinnikuman and the gill-man. We're already up to TWO fish with legs in the same series? No wonder these things are so valuable. 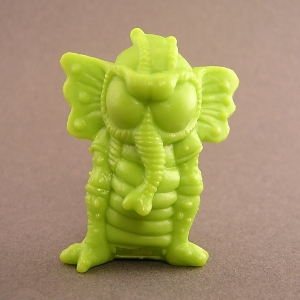 EGGIPEDE:
You know what I always love? Creatures that evoke totally different, totally unrelated creatures, like how "Eggipede" looks a very great deal like an elephant, if it were made out of arthropod parts. It's also our first explicit arthropod in the line, if you don't count the faker that is Eggface. 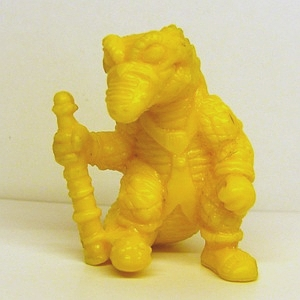 GATOREGGER:
Wouldn't "eggigator" - alleggator according to my spouse who is absolutely correct and I am ashamed to have not thought of it - have worked better here? Regardless, this is our second humanoid reptile and another one that looks like a really chill guy. Is that even a weapon he's wielding at all, or a really fancy cane? I guess it goes with Gator's nice shoes and oversized business tie. Gator is a more sophisticated Bad Egg. Possibly the kind who throws money around and gets some other Bad Egg to do Bad Egg stuff for him. 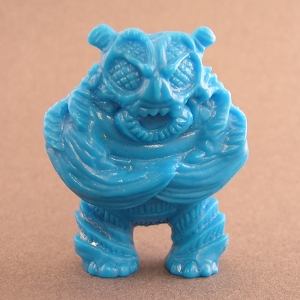 EGGS BENETICK:
I think this is hands-down the best name in the series, and I have to like this guy on principle for being a "tick," even if he doesn't really look like one at all. Benetick's best features are his eyes, which you can read as four "angry" eyes or just two huge ones divided in half by their neat chitinous framework. 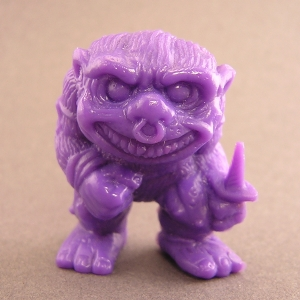 OMLETTO:
This conniving little troll seems to be the fan favorite, and while I heavily favor the bugs and fish, there's no denying Omletto has the most personality. 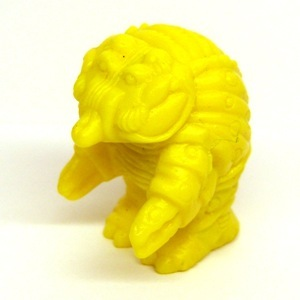 EGG GRIPPER:
Another arthropod, and a delightfully chunky one, like a cross between a beetle grub and a roly-poly. Gripper's namesake are its thick, clamp-like pincers, which I'm going to assume can reach out pretty far on those soft, stretchy looking segmented arms. 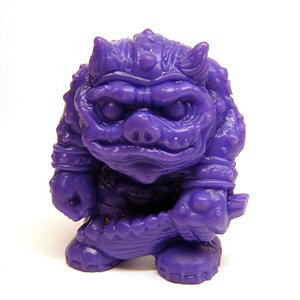 POACHER:
Get it? Like "poached" eggs? Poacher is the most humanlike of the Bad Eggs, just a helmeted ogre with an adorably determined looking pug face. I still want to believe these big-headed humanoids "really" look this way and aren't just symbolically big-headed for the sake of their toys. 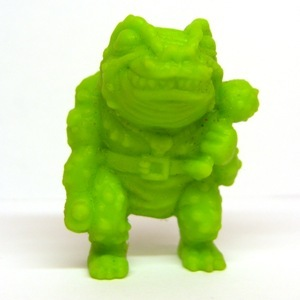 RAW EGGSTER:
Incredibly similar to the other armed reptilians, but Eggster really comes across as more of a "toad" to me than a lizard, and I am almost as big on frog-people as I am fish-people. Eggster even looks like the most menacing of the three, but only because he's actually holding up his weapon. It's still more of a "look what I've got! You're jealous" look than a threatening one. 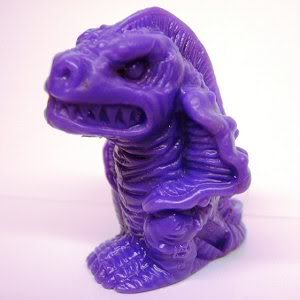 SQUEGG:
I guess I spoke too soon about dinosaurs, since Squegg clearly fills a carnosaur-like aesthetic role, even if it looks a bit more alien than Eggasaurus. Its arms even seem more like flippers, or even part of a cobra-like hood down its otherwise limbless sides. 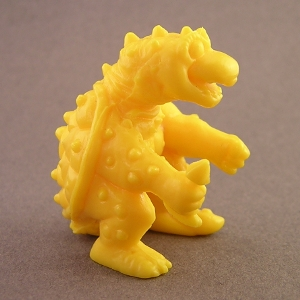 TURTLESHELL:
Turtles as formidable monsters are another creature design rarity I'm always pleased to see, though shelly has by far the cutest, happiest face of the Eggz and really, really looks more like it wants a hug than to use its little dagger. These are not criticisms, trust me. The cute streak to these gnarly mutants adds significantly to their fun, even if it wasn't intentional. 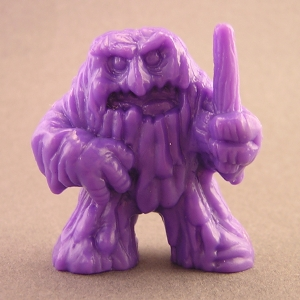 YOLKYUK:
An ooze guy is a given in any monster line, especially one already revolving around slime as a gimmick. Surprisingly however, Yolkyuk isn't among my personal favorites. I guess it's just too easily overshadowed by these other weirdos, and just feels like your bare-bones sludge man. I do like how easily it can also be interpreted as a rocky golem or a rotten wood monster. It's a versatile sculpt. 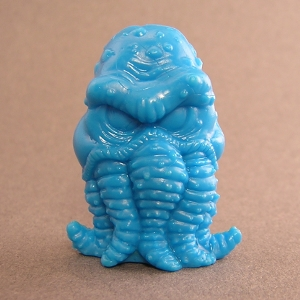 OCTOEGG:
This is another one I more easily remember than the rest, I guess because it's one of the only Eggs to be neither an arthropod nor a vertebrate. It doesn't necessarily look like a cephalopod either, of course, but maybe a little like an H.G. Wells Martian. I'm positive that this would have been my no-contest favorite when I was a kid. I was especially a sucker for segmented, worm-like tentacles, and I still am.

With its simple but highly unique appearance and ominous, intelligent stare, I'd even go so far as to nominate Octoegg as the "mastermind" of the Bad Eggz, a leader or at least the leader's top advisor, secretly pulling the real strings behind a figurehead like Gatoregger. 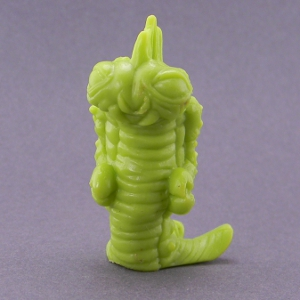 PEEL POACHER:
Hey now, we already had "poacher" as a name. Are we really so low on egg jokes? Otherwise, Peely is a lovely little critter. Kind of fish-like, kind of worm-like and kind of insect-like, with crab-like claws and a head between Brundlefly and a pop-eyed goldfish. This sort of face, basically two globular eyes glued together like a set of meat binoculars with otherwise minimal features, is pretty much always a shortcut to my heart. 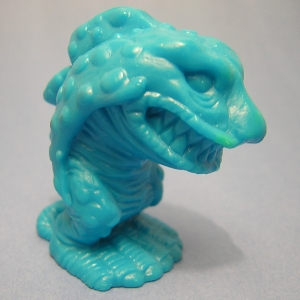 PROTEIN PLASM:
Wait, wait, so, the Bad Eggz Bunch has six reptiles, seven "bugs" and THREE bipedal fish, TWO of which are terrifying, embryonic shark-goblins covered in pustules? Now I really know why this line came and went so quietly in such limited supply. It was simply too pure, too perfect a gift to this delinquent world. 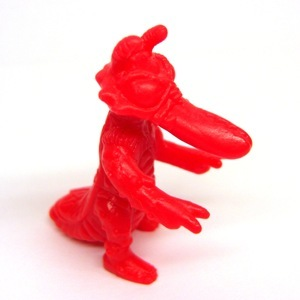 SCRAMBLE SKEETO:
I have to love an insect creature this amusingly shaped. It's closer to a cartoon duck than a mosquito, and that's fine by me. If you look closely enough, you can see that Skeeto's bulbous bill is split down the middle, and can open into a pair of jagged mandibles. I'm not certain she really sucks blood so much as tears people open and pours it down her throat. 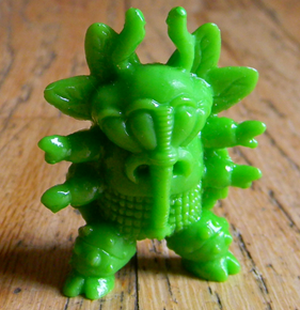 HARD BOILER:
This one's photo comes courtesy MinifiguresXD, and it stands out as the only perfect symmetrical Bad Eggz sculpt. Its details are also a lot sparser, its textures smoother, an overall cleaner and more rigid design that almost looks like it came from a completely different artist, or may have been some hasty last-minute addition. It still has a lot going for it among the insectoids, with a more realistic number of appendages and an ironically much more mosquito-like feeding apparatus than the one actually named after mosquitoes. You could actually just switch the two names around and I don't think anyone would notice. 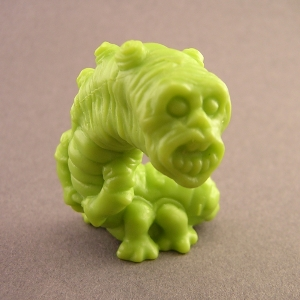 LARVEGG:
Finally, we have this downright disturbing fleshy caterpillar-man. While every other Bad Egg is a more brutal, violent sort of frightening, Larvegg is more of an uncanny abomination that would haunt every child's dreams if it wasn't just an inch tall.


I guess this wraps up our quick look at Bad Eggz Bunch, a neat little experiment in monster toys that could now cost you up to (or over) $2,400 to complete the set. Yikes! Remember to thank soupie for going to all the real trouble of selling however many human souls it took to assemble such a thorough photo gallery, otherwise bogleech.com may have gone on who knows how long without making you read the words "Beater Beast."