Whether they know it or not, everyone has seen Hagen Renaker brand porcelain figures. They're tiny, adorable and positively hundreds have been produced since the 1940's, beginning with a line of tiny horses and soon expanding into cats, dogs, frogs, snails, fairies and every cute, wholesome, innocent little woodland critter under the sun...usually.

Many of those cute, wholesome little critters were designed by the late Nell Bortells, but it's said that her favorite creations were her wholly original Little Horribles characters, a family of nearly fifty ghoulish mutants she designed in the late 50's with a magnificently twisted sense of humor and whimsical aesthetic to easily rival the work of then-famous contemporaries like Basil Wolverton or Ed Roth. Worth a small fortune today, we have collectors Sheri and Ed to thank for the line's most complete image gallery, and with their blessing, this look at my spooky thirteen personal favorites of the series!

We begin with the only Little Horrible I personally own. It was my introduction to the series, so it can be yours too! Mine is unfortunately missing the notoriously fragile wings, and I not only had no idea what this figure was for the longest time, I still have no idea how I obtained it. It's as if my people eater was just sort of there one day.

The People Eater is inspired, of course, by the wildly popular Sheb Wooley song, debuting as a #1 hit less than a year before Nell crafted her version, and I dare you to find any better interpretation of the one-eyed menace. Any cursory search for "purple people eater" will show that most artists depict the interstellar carnivore as a reptilian or mammalian quadruped, often a sort of hairy, humanoid gargoyle with a unicorn's horn. Miss Bortells, on the other hand, gifts us this gelatinous-looking, hump-backed caterpillar-slug nightmare, with wicked black lips and a truly haunting, stalked eye. How does this globster even fly with those little pigeon wings? That's gotta be a sight.

You'll notice almost every Little Horrible has its own catchphrase. These were originally printed on cards included with every figurine, part of the phrase on the front and the rest on the inside. Not many people managed to hang onto these, and with their cards, horribles are worth more than their weight in gold.

Catchphrase: "I know I'm going to...wake up hung over!"

There's something exceptionally eerie about this pale, withered being, defined as a character by a perpetual need for medical attention. Is the patient ever not a patient? Who is he the rest of the time? Like many of the more "human" horribles, this design is exemplary of a goofy-grotesque style that we seldom see today, but was all the rage among cartoonists from the 30's through early 70's.

"Toothy" is a horrible of exceptional intrigue. The figure was apparently never even released for whatever reason, but a few different versions have fallen into the hands of collectors...and all anybody knows is that this thing was to be named Toothy. Toothy has no known catchphrase, no known context. Toothy is the missingno of the Little Horribles, an enigma whose blank stare and maniacal grimace were, apparently, not meant for the eyes of us mortals.

Or, he's just one lovable goofball they didn't have time to finalize and market. The mix of human-like and almost reptilian qualities are quite nice, and second only to that smiledog-like face, Toothy's massive, hand-like feet are particularly cool.

"If I had the wings of an angel, I could look over transoms."

I think Tom here has my vote for the most frightening of the horribles. He looks almost boneless and toothless, his right eye is a protruding lens shaped like a keyhole, his "normal" eye is still wildly intense, and all we know is that he's very, very devoted to his peeping. A "peeping Tom" is usually assumed to be driven first and foremost by lechery, but the thought of this misshapen entity watching us in secret is chilling enough whatever his motivation.

I...what? This figurine consists of only oversized, grotesque hands and feet sticking out of a black box, its catchphrase isn't known and its name is..."John & Marsha?" At the time, these were cliche names for young couples in love, which makes this all the more confusing. We only see one set of hands and one set of feet. Who IS John, and who IS Marsha? What are they doing? Do we want to know?

Most of the Horribles have a more "freak of nature" vibe to them, and that may be just as true of RH Negative, but he's obviously meant to imply an undead vampire. I love the weird proportions he has, with a big head on a squat body, highly contorted legs, and arms apparently very slightly longer than they naturally ought to be. I can't tell if he's supposed to be begging on the streets for blood or he's just a "town drunk" who couldn't keep on his feet any longer.

Few Hagen Renaker figures were anything other than a single, solid piece of porcelain, but Silent Sam came with a shirt button glued directly over his mouth, as though fastening it shut. Freaky! Almost more freaky than the fact that Sam is either protruding from the ground like some sort of mole or simply hasn't anything more than a head and arms.

"Can you use...an EXTRA hand around the place?"

Helping Hand might be one of the oddest Renaker figurines ever made, what with being nothing but one big, gnarled, rotten green hand with six fingers. I'm glad this is one with a known catchphrase, confirming that Helping Hand is alive, sapient and somehow capable of speech. In comparison to the other figures, we also have to assume this talking, creeping hand is bigger than a person. Was it always just a hand...or was it part of something even bigger?

This guy looks like a lot of things, and none of those things are a moose. He's got a face like a proboscis monkey, ears like a bear, a "hump" more like the fin of some bloated porpoise and a body that makes me think of a starved pig, all an appetizing pond-scum green up to his unsettlingly human face.

There's actually one Horrible, big foot, whose catchphrase is "Fallout? Never bothered me none." The relatively new concept of radioactive mutation had already been taking Hollywood by storm at the time, but the Little Horribles might be the most believable examples I've ever seen. You're certainly more likely to come out an atomic wasteland looking like Moose here than like a superhero, that's for sure.

"SOME guys...are pretty hard to take!"

While a "skindiver" is simply someone who dives without scuba gear, it takes on much more ominous connotations in light of this cephalopod's dialog...if this even really is a cephalopod, and not simply someone mutated to the point of looking very much like a mollusk.

Real octopuses are downright precious, flawless angel-babies of the sea and I'm thankful their image has undergone so much improvement in the public eye, but at the same time, I kind of miss them as "spooky" animals. Farther back in horror culture, Octopuses were one of those "creepy" animals often portrayed as denizens of haunted houses, mad scientist's dungeons and vampire's castles. Can't we have both? Can't octopuses be adorable pixar heroes AND "creepy crawlies?"

"And how long...you think I been standing in line?"

This guy might give Toothy and Peeping Tom some stiff competition in the horror department. The design alone is strikingly ghastly, a sort of shriveled fish-lizard with far too large a mouth, while the name and slogan seem to imply that hunger alone created this monster, possibly from someone or something else. Maybe this one isn't so much an atomic mutation as something along the lines of a hungry ghost?

Here we have the token fanservice of the Little Horribles, an eyeless cutie apparently embarrassed to be caught naked. I love how the lips and teeth completely dominate the upturned face, and speaking of Hungry Ghosts, the whole look and feel of this character reminds me heavily of Japanese youkai. In fact, quite a few of the Horribles wouldn't look out of place in the books of Toriyama Sekien.

"Lately, doc...Everybody seems to STARE at me."

It's almost impossible for me to pick a favorite of the Horribles, but the simplicity of Eye Spider is definitely up there. It's the only Horrible to allude to an arthropod in any way, so there's already an obvious advantage, though this "spider" is clearly of more vertebrate origins, consisting of an unsettlingly human eye surrounded by unsettlingly human legs. Eye Spider recalls the Bug-Eyed-Monsters of 1950's Hollywood better than any other Horrible, and today, it would be right at home as some scurrying, lower-level video game enemy.

...So, could I be the first person in history to have drawn "Little Horribles" fan art? I hope I'm not, because they deserve far more love and admiration than that. The sensibilities behind them feel just as morbidly witty now as they did in 1958, and even funnier from roots as inoccuous as Hagen Renaker. The bad boys of porcelain figurines isn't a title that many have vied for, but I don't believe it's a title anyone could wrench from them easily.

Remember to check out the other thirty some characters at the Hagen Renaker Museum, whose owners were nice enough to let me borrow their photos for this review! 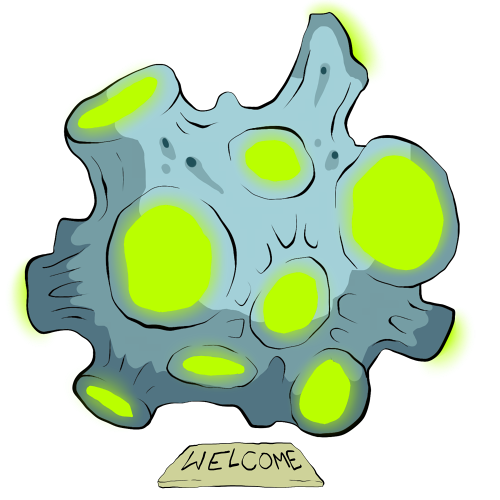