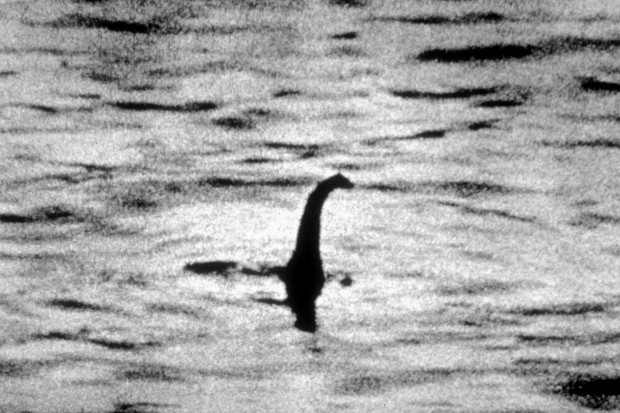 Maybe "cryptozoology" is no more "Halloween Appropriate" than any random monster review I might post the rest of the year, but I'm always looking for something new to make the season special, and that's why, this year, we're going to be going over my feelings on a number of famous cryptids. Millions of words may have been spoken and written on Loch Ness and the Goatsucker already, sure, but I've never really talked about the full-blown fanaticism I had for these stories when I was just a child. Maybe that's because, as an adult, I've pretty much lost all actual faith in the fortean, but we'll be talking a bit about that too, and the reasons for it...aren't really all that sad.

First, let's talk about one of the current most popular cryptids in U.S. history... 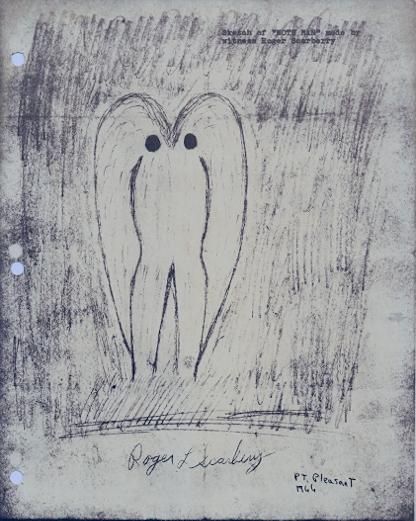 On November 12, 1966 in Point Pleasant, West Virginia, five men reported a human-sized, human-shaped figure flying over them from the treetops...interrupting them while they were digging a grave, by the way. Only three days later, two couples claimed to encounter a black, winged entity with huge, shining red eyes. 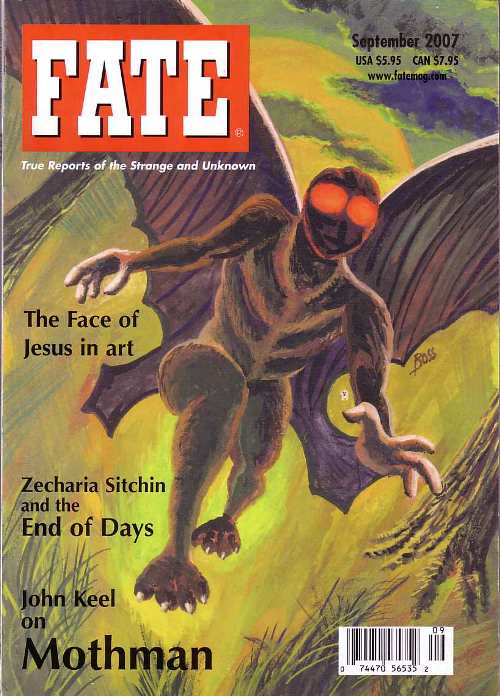 Local newspapers were quick to dub the creature "Mothman," and it's commonly said that the name was taken "from a Batman character," but there isn't any "Mothman" in Batman continuity, only the seldom used villain "Killer Moth." I'm pretty sure somebody just got confused there, or maybe they just thought Mothman sounded like a funny parody of Batman himself.

With U.F.O. mania already weeping the country, Mothman would soon come to be associated with a sharp spike in flying saucer incidents and other paranormal phenomena. "Men In Black" allegedly came poking around and interrogating witnesses. Television and radio signals distorted when the creature was nearby. Its eyes were said to cause nausea, psychic visions or radiation sickness, and it was pegged as everything from an extraterrestrial visitor to a fallen angel. 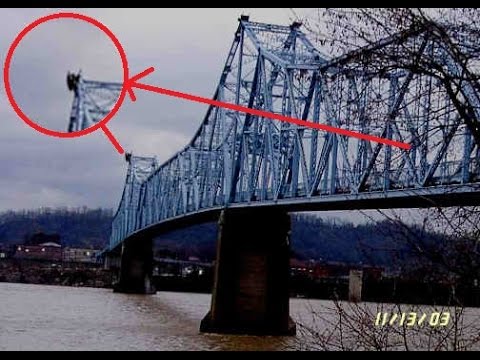 ...But Mothman fever would come to an end by December of the following year, when nearly fifty people perished in the collapse of the Silver Bridge. In all likelihood, the public was simply too busy mourning to think about spooky bird people anymore, but it wasn't long before conspiracy theoriests would tie the two together, claiming that the Mothman was either responsible for the deadly tragedy or some sort of dark omen, maybe even the specter of death itself, warning mankind of impending doom before collecting the souls of the dead.

...Which, in restrospect, was kind of in poor taste. I mean, imagine some asshole today selling a book about bigfoot's ties to 9/11, right? Sheesh. 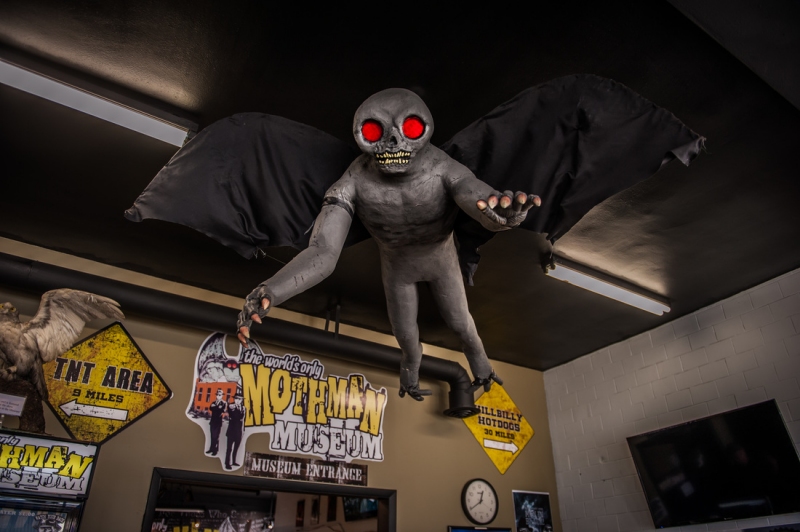 In any case, the legend of the Mothman soon became a badge of pride to the town of Point Pleasant, which celebrates each year with a local Mothman festival and hosts a pretty cool Mothman museum, seen here. To think, all they needed was a flying monster for people to ever visit West Virginia on purpose.

I've actually heard from some that there many older residents still earnestly believe in the being, and Mothman skepticism can still be the subject of town bar fights to this day. 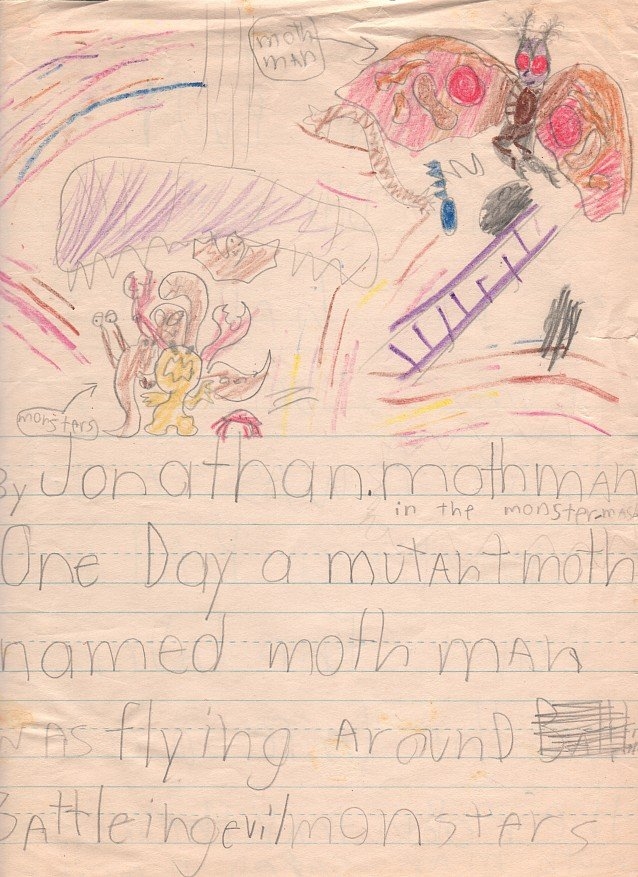 My own earliest awareness of the owlbug, meanwhile, actually came from a children's book in Hickory Elementary School's library, possibly one of my only pleasant memories from a school that was closed down more than once for black mold. This book's illustration didn't do the entity much justice, depicting a sort of hairy ape-man with big eyes and butterfly wings, but young me was delighted all the same to know that there had maybe been some sort of giant bug person roaming around the world, and I almost immediately drew him from memory when I went home that day, complete with my own headcanon that he was a "good monster" who fought "bad monsters."

You can't really tell, but my Mothman is defeating the bad monsters with a Rube Goldberg device involving a ladder, rope, bowling ball, and what's supposed to be a big purple net. I know this says "Mothman in the Monster Mash" but I assure you, he is trapping, not mashing his fellow monstrosities. It said so on the back part that I didn't scan. 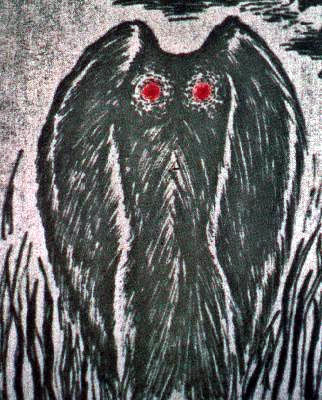 Mothman's original description was, of course, quite a bit more intriguing than just a big butterfly guy. Lacking a distinct head, mouth or virtually any other features, it was alternately said to be black, grey, or even almost white, and really sounded more than anything lse like a very large, very strange owl. An owl, sandhill crane or other natural bird remains the most reasonable explanation, but "most reasonable" is just common slang for "least fun." 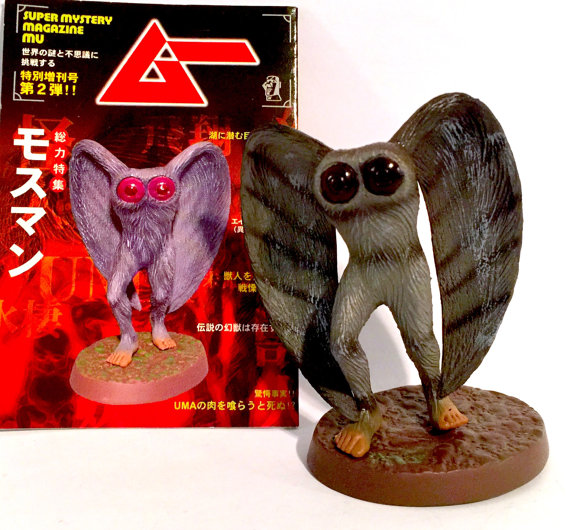 I know I've said that I'm too jaded to really believe in the paranormal without hard proof and generally accept that least fun explanation as the default until proven otherwise, but I don't have to personally believe in a mythical entity to have a preferred interpretation. I'd even go so far as to call myself a Mothman purist, as I pretty much always prefer Mothman with the headless, minimalistic owl-like design and only ambiguously bird-like or insect-like characteristics. I think this Japanese figure captures it best, and I actually love the rather silly addition of completely human feet. That just raises all kinds of questions. 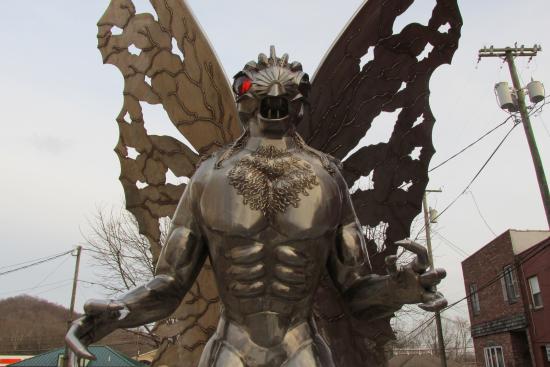 None of this is to say that I "dislike" designs that go full avian, take "moth man" literally, or even give said moth man a rippling six pack, but my favorite Mothman is just a little more alien than that, something that only brings to mind a moth, a bird, or a "winged humanoid" because our minds can't totally wrap around whatever the entity really is. Both the "interdimensional alien visitor" and "harbinger of death" angles mesh pretty well with that kind of mind-bending ultra-natural being, and I like to think it could actually be a little bit of both; something from another world that somehow knows when something bad is coming to our own, and whether it arrives to try and warn us or just to feed somehow is all up to you. 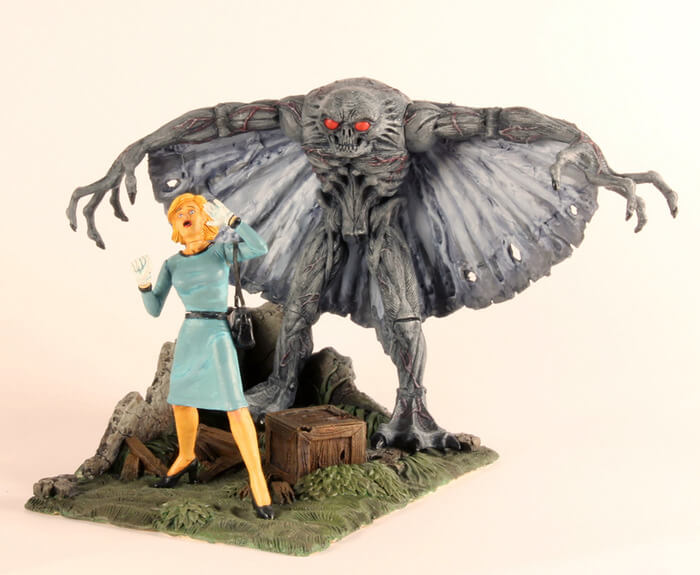 I honestly can't tell you how pleased I've been with the incredible surge in Mothman's popularity as of late, either. I swear it had to be tumblr memes that did it, or something, because I easily hear about Mothman 1,000% more now than I did less than half a decade ago. Perhaps it began as a joke, but search his name today and you would think the Mothman was almost a religious figure, idolized like a gothic guardian angel by millenials and younger generations who, admittedly, don't really have a lot of other heroes and heroines they can rely on these days.

And if Mothman were both real and here now, I think Mothman would be pretty proud of that. 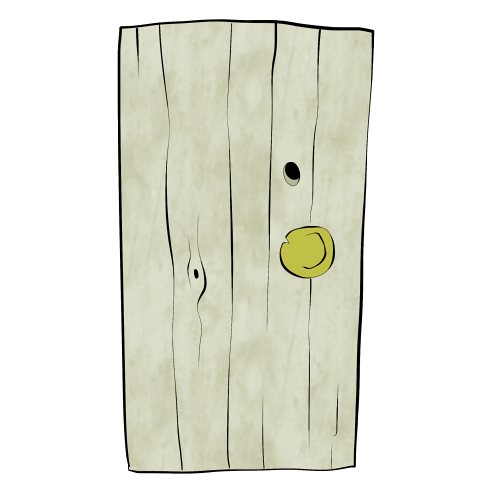